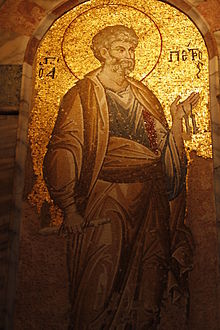 Saint Peter or Simon Peter was an early Christian leader, who is featured prominently in the New Testament Gospels and the Acts of the Apostles. The son of John or of Jonah and from the village of Bethsaida in the province of Galilee, his brother Andrew was also an apostle. Simon Peter is venerated in multiple churches and is regarded as the first Pope by the Roman Catholic Church. After working to establish the church of Antioch for seven years presiding as the city's bishop[2] and preaching to scattered communities of believers (Jews, Hebrew Christians and the gentiles), in Pontus, Galatia, Cappadocia, Asia Minor and Bithynia, Peter went to Rome. In the second year of Claudius, it is claimed, he overthrew Simon Magus and held the Sacerdotal Chair for 25 years. He is said to have been put to death at the hand of Nero. He wrote two Catholic epistles. The Gospel of Mark is also ascribed to him (as Mark was his disciple and interpreter). On the other hand, several books bearing his name—the Acts of Peter, Gospel of Peter, Preaching of Peter, Revelation of Peter, and Judgement of Peter—are rejected by Christians as Apocryphal.[3][4][5]

According to New Testament accounts, he was one of Twelve Apostles, chosen by Jesus from his first disciples. He was a fisherman assigned a leadership role by Jesus and was with Jesus during events witnessed by only a few Apostles, such as the Transfiguration.[6] Upon his death, he is said to have been martyred by Emperor Nero and crucified upside down on an inverted cross, as he saw himself unworthy to be crucified the same way like Jesus Christ.

Peter, a name derived from the Greek word for rock, is also known as Simon Peter, Cephas (Greek: Κηφᾶς) and Kepha (Hebrew: כיפא‎). Both Cephas and Kepha also mean rock. His original name was Shimon or Simeon. Simon Peter (Greek: Πέτρος Pétros, "stone, rock";[7] possibly died AD 67), sometimes Simon Cephas (Greek: Σιμων Κηφᾶς Simōn Kēphas; Aramaic: ‎ Šimʻōn Kêfâ; Syriac: ܫܶܡܥܽܘܢ ܟ݁ܺܐܦ݂ܳܐ Sëmʻān Kêfâ) after his name in Hellenised Aramaic. Cepha (cephah) is a native Aramaic Syriac word (Syriac: ܟ݁ܺܐܦ݂ܳܐ Kîpâ).[8] However, a "loose language" modern Aramaic (Hebrew, Chaldee, Arabic, &c.,) dictionary may define Cepha, e.g., such as in Hebrew: כֵּיפׇא \ כֵּיף‎‎, to mean Rock, yet, may not explain the actual origin of the word itself.[9] It is unlikely that one will find this particular word ܟ݁ܺܐܦ݂ܳܐ in any "strict language" Aramaic dictionary other than that of the Aramaic Syriac dictionary. For instance the Hebrew word for Cepha (כֵּיפׇא) would not be present, while סֶלַֽע (ßĕ'lặᵉ) ; i.e., rock, cliff, Petra][10] would, for סֶלַֽע is a native Hebrew word.[10] Within a "strict language" dictionary the word will be in its native and original form, thus rock will be translated into the language that which is being used, e.g., "English-Hebrew dictionary"[11] where the word(s) for rock is translated as such : (הִתְנַדְנֵד−.פ, הִתְנוֹעֵעַ, הׇנֵעַ, נַדְנֵד, סֶלַע, צוּר, ש. (ריִֹק and not כֵּיפׇא \ כֵּיף.

Kephas, Hebrew for "rock," was translated into Greek as Petros (which means "stone"), and into Latin as Petrus, from which are derived the English and German "Peter", the French "Pierre", the Italian "Pietro", the Spanish and Portuguese "Pedro", and the Russian "Piotr." 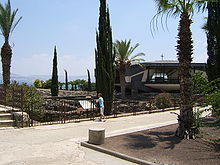 Ruins of ancient Capernaum on north side of the Sea of Galilee. An Orthodox church is built on top of traditional site of Apostle Peter's house.

Peter's life story relies on the four Canonical Gospels, The Book of Acts, New Testament Letters, Non-Canonical Gospels such as the Gospel According to the Hebrews and other Early Church accounts of his life and death. In the New Testament, he is among the first of the disciples called during Jesus' ministry. It was during his first meeting with Jesus that Jesus named him Peter. Peter was to become the first Apostle ordained by Jesus in the early church.[6]

In the Synoptic Gospels, Peter (then Simon) was a fisherman along with his brother Andrew and the sons of Zebedee, James and John. The Gospel of John also depicts Peter fishing, even after the resurrection of Jesus, in the story of the Catch of 153 fish.