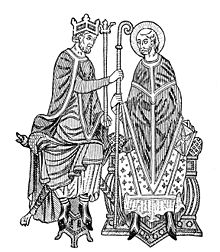 A medieval king investing a bishop with the symbols of office. By Philip Van Ness Myers, 1905

The Investiture Controversy or Investiture Contest[1] was the most significant conflict between Church and state in medieval Europe. In the 11th and 12th centuries, a series of Popes challenged the authority of European monarchies over control of appointments, or investitures, of church officials such as bishops and abbots. Although the principal conflict began in 1075 between Pope Gregory VII and Henry IV, Holy Roman Emperor, a brief but significant struggle over investiture also occurred between Henry I of England and the Pope Paschal II in the years 1103 to 1107, and the issue played a minor role in the struggles between church and state in France as well. The entire controversy was finally resolved by the Concordat of Worms in 1122.

By undercutting the Imperial power established by the Salian emperors, the controversy led to nearly 50 years of civil war in Germany, and the triumph of the great dukes and abbots, until Imperial power was reestablished under the Hohenstaufen dynasty.

After the decline of the Roman Empire, and prior to the Investiture Controversy, while theoretically a task of the Church, investiture was in practice performed by secular authorities.[2] Since a substantial amount of wealth and land was usually associated with the office of bishop or abbot, the sale of Church offices (a practice known as simony) was an important source of income for secular leaders.[citation needed] Since bishops and abbots were themselves usually part of the secular governments, due to their literate administrative resources or due to an outright family relationship (younger sons of the nobility would often be appointed bishops), it was beneficial for a secular ruler to appoint (or sell the office to) someone who would be loyal.[2]

The crisis began when a group within the church, members of the Gregorian Reform, decided to address the sin of simony by restoring the power of investiture to the Church. The Gregorian reformers knew this would not be possible so long as the emperor maintained the ability to appoint the pope, so their first step was to liberate the papacy from the control of the emperor. An opportunity came in 1056 when Henry IV became German king at six years of age. The reformers seized the opportunity to free the papacy while he was still a child and could not react. In 1059 a church council in Rome declared, with In Nomine Domini, that secular leaders would play no part in the selection of popes and created the College of Cardinals as a body of electors made up entirely of church officials. To this day the College of Cardinals selects the pope, and once Rome regained control of the election of the pope it was ready to attack the practice of secular investiture on a broad front.

In 1075 Pope Gregory VII asserted in the "Dictatus Papae",[3][4] a “collection of canons” (see also Canon law), one of which claimed that the deposal of an emperor was under the sole power of the pope.[5] It declared that the Roman church was founded by God alone - that the papal power (the auctoritas of Pope Gelasius) was the sole universal power; in particular, a council held in the Lateran from February 24 to 28 of the same year[6] decreed that the pope alone could appoint or depose churchmen or move them from see to see. By this time, Henry IV was no longer a child, and he continued to appoint his own bishops [5] and he reacted to this declaration by sending Gregory VII a letter in which he withdrew his imperial support of Gregory as pope in no uncertain terms: the letter was headed "Henry, king not through usurpation but through the holy ordination of God, to Hildebrand, at present not pope but false monk".[7] It called for the election of a new pope. His letter ends:

I, Henry, king by the grace of God, with all of my Bishops, say to you, come down, come down, and be damned throughout the ages.[7]

The situation was made even more dire when Henry IV installed his chaplain, Tedald, a Milanese priest, as Bishop of Milan, when another priest of Milan, Atto, had already been chosen in Rome by the pope for candidacy.[8] In 1076 Gregory responded by excommunicating the king, removing him from the Church and deposing him as German king.[9]

Enforcing these declarations was a different matter, but the advantage gradually came to be on the side of Gregory VII. German princes and the aristocracy were happy to hear of the king's deposition. They used the cover of religion as an excuse to continue the rebellion started at the First Battle of Langensalza in 1075, and for seizure of royal holdings. Aristocrats claimed local lordships over peasants and property, built forts, which had previously been outlawed, and built up localized fiefdoms to secure their autonomy from the empire.[5] 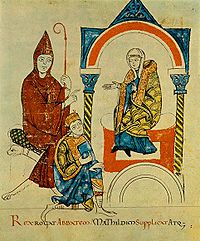 Henry IV requests mediation from Matilda of Tuscany and abbot Hugh of Cluny.

Thus, because of these combining factors, Henry IV had no choice but to back down, needing time to marshal his forces to fight the rebellion. In 1077 he traveled to Canossa in northern Italy to meet the pope and apologize in person. As penance for his sins, and echoing his own punishment of the Saxons after the First Battle of Langensalza, he dramatically wore a hairshirt and stood in the snow barefoot in the middle of winter in what has become known as the Walk to Canossa. Gregory lifted the excommunication, but the German aristocrats, whose rebellion became known as the Great Saxon Revolt, were not so willing to give up their opportunity. They elected a rival king, Rudolf von Rheinfeld.

Henry IV then proclaimed Antipope Clement III to be pope. In 1081 Henry IV captured and killed Rudolf, and in the same year he invaded Rome with the intent of forcibly removing Gregory VII and installing a more friendly pope. Gregory VII called on his allies the Normans in southern Italy, and they rescued him from the Germans in 1085. The Normans sacked Rome in the process, and when the citizens of Rome rose up against Gregory he was forced to flee south with the Normans. He died soon thereafter.

The Investiture Controversy continued for several decades as each succeeding pope tried to diminish imperial power by stirring up revolt in Germany. These revolts were gradually successful. Henry IV was succeeded upon his death in 1106 by his son Henry V, who had rebelled against his father in favor of the papacy, and who had made his father renounce the legality of his antipopes before he died. Henry V also chose one more antipope, Gregory VIII; however, he renounced some of the rights of investiture with the Concordat of Worms, and was received back into communion and recognized as legitimate Emperor as a result.

English investiture controversy of 1103 to 1107

At the time of Henry IV's death, Henry I of England and the Gregorian papacy were also embroiled in a controversy over investiture, and its solution provided a model for the eventual solution of the issue in the Empire.

William the Conqueror had accepted a papal banner and the distant blessing of Pope Alexander II upon his invasion, but had successfully rebuffed the Pope's assertion after the successful outcome, that he should come to Rome and pay homage for his fief, under the general provisions of the "Donation of Constantine".

The ban on lay investiture in Dictatus Papae did not shake the loyalty of William's bishops and abbots. In the reign of Henry I the heat of exchanges between Westminster and Rome induced Anselm, Archbishop of Canterbury, to give up mediating and retire to an abbey. Geoffrey of Meulan, one of Henry's chief advisors, was excommunicated, but the threat of excommunicating the king remained unplayed. The papacy needed the support of English Henry while German Henry was still unbroken. A projected crusade also required English support.

Henry I commissioned the Archbishop of York to collect and present all the relevant traditions of anointed kingship. "The resulting Anonymous of York treaties are a delight to students of early-medieval political theory, but they in no way typify the outlook of the Anglo-Norman monarchy, which had substituted the secure foundation of administrative and legal bureaucracy for outmoded religious ideology"[10]

The Concordat of London (1107) suggested a compromise that was taken up in the Concordat of Worms. In England, as in Germany, a distinction was being made in the king's chancery between the secular and ecclesiastical powers of the prelates. Employing the distinction, Henry gave up his right to invest his bishops and abbots and reserved the custom of requiring them to come and do homage for the "temporalities" (the landed properties tied to the episcopate), directly from his hand, after the bishop had sworn homage and feudal vassalage in the ceremony called commendatio, the commendation ceremony, like any secular vassal. The system of vassalage was not divided among great local lords in England as it was in France, for by right of the Conquest the king was in control.

Concordat of Worms and its significance

On the Continent, after 50 years of fighting, a similar compromise (but with quite different long-term results) was reached in 1122, signed on September 23 and known as the Concordat of Worms. It was agreed that investiture would be eliminated, while room would be provided for secular leaders to have unofficial but significant influence in the appointment process.

While the monarchy was embroiled in the dispute with the Church, it declined in power and broke apart. Localized rights of lordship over peasants grew, increasing serfdom and resulting in fewer rights for the population. Local taxes and levies increased while royal coffers declined. Rights of justice became localized and courts did not have to answer to royal authority. In the long term the decline of imperial power would divide Germany until the 19th century. Similarly, in Italy the effect of the investiture controversy was to weaken the authority of the emperor and to strengthen all those local forces making for separatism.[11]

As for the papacy, it gained strength. During the controversy, both sides had tried to marshal public opinion; as a result, lay people became engaged in religious affairs and lay piety increased, setting the stage for the Crusades and the great religious vitality of the 12th century.

The dispute did not end with the Concordat of Worms. There would be future disputes between popes and Holy Roman Emperors, until northern Italy was lost to the Empire entirely. The Church would turn the weapon of Crusade against the Holy Roman Empire under Frederick II. According to Norman Cantor:

The investiture controversy had shattered the early-medieval equilibrium and ended the interpenetration of ecclesia and mundus. Medieval kingship, which had been largely the creation of ecclesiastical ideals and personnel, was forced to develop new institutions and sanctions. The result during the late eleventh and early twelfth centuries, was the first instance of a secular bureaucratic state whose essential components appeared in the Anglo-Norman monarchy."[12]