Christianity in the 21st century

Christianity in the 21st century 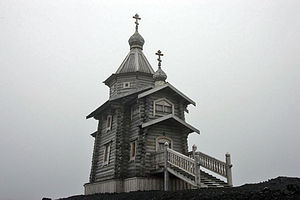 Trinity Church, Antarctica, a 15m-high siberian pine Russian Orthodox church that can accommodate up to 30 worshipers. It opened in 2004, and it is manned year-around by Orthodox hieromonk priests volunteering for the Antarctic assignment.

Christianity in the 21st century is characterized by the pursuit of Church unity and the continued resistance to secularization. Christian missions continue on a large scale but no longer originate predominantly from Europe which was the situation in the 19th and early 20th centuries. 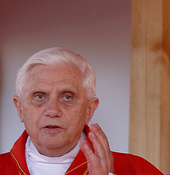 With the election of Pope Benedict XVI in 2005, the Church has so far seen largely a continuation of the policies of his predecessor, John Paul II, with some notable exceptions. Benedict decentralized beatifications and reverted the decision of his predecessor regarding papal elections.[1] In 2007, he set a Church record by approving the beatification of 498 Spanish Martyrs. His first encyclical Deus Caritas Est discussed love and sex in continued opposition to several other views on sexuality.

Roman Catholic attempts to improve ecumenical relations with the Eastern Orthodox Churches have been complicated by disputes over both doctrine and the recent history of the Orthodox Eastern Catholic Churches, involving the return of expropriatiated properties of the Eastern Catholic Churches, which the Orthodox Church took over after World War II at the request of Joseph Stalin.[citation needed]

In June 2004, the Ecumenical Patriarch Bartholomew I's visit to Rome for the Feast of Saints Peter and Paul (29 June) afforded him the opportunity for another personal meeting with Pope John Paul II, for conversations with the Pontifical Council for Promoting Christian Unity and for taking part in the celebration for the feast day in St. Peter's Basilica.

The declaration of Ravenna in 2007 re-asserted these beliefs, and re-stated the notion that the bishop of Rome is indeed the protos, although future discussions are to be held on the concrete ecclesiological exercise of papal primacy.

There are churches established every day in Africa and Asia. These groups are largely Evangelical, Pentecostals, or Charismatics.

In February 2001, the United Methodist Church organized the Saint Brigid of Kildare Monastery. It is a Methodist-Benedictine residential monastery for women in Collegeville, Minnesota.

Postmodern Christianity has influenced the emerging church movement. Critics[citation needed] allege, however, that this movement's understanding of faith has led many of its adherents outside the bounds of traditional Christianity.