Menno Simons (1496 – 31 January 1561) was an Anabaptist religious leader from the Friesland region of the Low Countries. Simons was a contemporary of the Protestant Reformers and his followers became known as Mennonites.

Menno Simons (/ˈmɛnoː ˈsimɔns/) was born in 1496[1] in Witmarsum, Friesland, Holy Roman Empire. He grew up in a poor peasant environment, but very little is known concerning his childhood and family. His father's name must have been Simon, Simons being a patronym, while he had a brother named Pieter.[2]

Simons grew up in a disillusioned and war-torn country. Friesland was ravaged by war in the late 15th and early 16th century. Landsknecht soldiers haunted the Frisian lands in the 1490s to force the 'Free' Frisians to accept the duke of Saxony-Meissen as their head of state. The duke was the governor of the Netherlands for the Habsburg family. One of the archenemies of the Habsburgs, the Duke of Guelders, invaded Friesland in 1515 and conquered half of it. The other half was ceded by Saxony to the Habsburgs. The Frisians tried to regain their freedom but they were too weak and eventually accepted the imperial authority of the Habsburg emperor Charles V.[citation needed]

Simons learned Latin and some Greek and he was taught about the Latin Church Fathers during his training to become a priest.[2] He had never read the Bible, either before or during his training for the priesthood, out of fear that he would be adversely influenced by it. When he later reflected upon this period in his life, he called himself stupid.[3]

Around 1526 or 1527, questions surrounding the doctrine of transubstantiation caused Menno Simons to begin a serious and in-depth search of the Holy Scriptures, which he confessed he had not previously studied, even being a priest. At this time he arrived at what some have termed an "evangelical humanist" position.

Menno's first knowledge of the concept of "rebaptism", which he said "sounded very strange to me", came in 1531. This came through the means of hearing of the beheading of Sicke Freerks Snijder at Leeuwarden for being "rebaptized". A renewed search of the scriptures left Menno Simons believing that infant baptism is not in the Bible. He discussed the issue with his pastor, searched the Church Fathers, and read the works of Martin Luther and Heinrich Bullinger. While still pondering the issue, he was transferred to Witmarsum. Here he came into direct contact with Anabaptists, preaching and practicing "believer's baptism". Later, some of the Münsterite disciples came there as well. While he regarded them as misled and fanatical, he was drawn to their zeal and their views of the Bible, the Church, and discipleship. When his brother Pieter was among a group of Anabaptists killed near Bolsward in 1535, Menno experienced a spiritual and mental crisis. He said he "prayed to God with sighs and tears that He would give to me, a sorrowing sinner, the gift of His grace, create within me a clean heart, and graciously through the merits of the crimson blood of Christ, He would graciously forgive my unclean walk and unprofitable life..."[5] 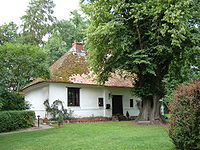 Menno Simons rejected the Catholic Church and the priesthood on 12 January 1536,[4] casting his lot with the Anabaptists. The exact date of his new baptism is unknown, but he was probably baptized not long after leaving Witmarsum in early 1536. By October 1536 his connection with Anabaptism was well known, because it was in that month that Herman and Gerrit Jans were arrested and charged with having lodged Simons. He was ordained around 1537 by Obbe Philips. Obbe and his brother, Dirk Philips, were among the peaceful disciples of sharina and Melchior Hoffman (the more radical of Hoffman's followers having participated in the Münster Rebellion). It was Hoffman who introduced the first self-sustaining Anabaptist congregation in the Netherlands, when he taught and practiced believers' baptism in Emden in East Frisia. Menno Simons rejected the violence advocated by the Münster movement, believing it was not Scriptural.[6] His theology was focused on separation from this world, and baptism by repentance symbolized this.[6]

Menno evidently rose quickly to become a man of influence. Before 1540, David Joris, an Anabaptist of the "inspirationist" variety, had been the most influential leader in the Netherlands. By 1544, the term Mennonite or Mennist was used in a letter to refer to the Dutch Anabaptists.[citation needed]

Twenty-five years after his renunciation of Catholicism, Menno died on 31 January 1561 at Wüstenfelde, Holstein, and was buried in his garden.[2] He was married to a woman named Gertrude, and they had at least three children, two daughters and a son.[citation needed] 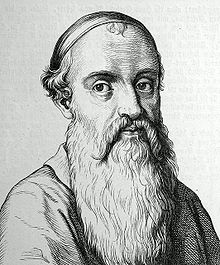 Menno Simons' influence on Anabaptism in the Low Countries was so great that Baptist historian William Estep suggested that their history be divided into three periods: "before Menno, under Menno, and after Menno". Menno is especially significant because of his coming to the Anabaptist movement in the north in its most troublesome days, and helping not only to sustain it, but also to establish it as a viable Radical Reformation movement.[citation needed]

Girolimon (1995) compares the teachings of Menno Simons with those of Protestant reformer John Calvin (1509–64), focusing on the issue of excommunication. This theological analysis stresses sharp contrasts between the two leaders on four basic principles: on procedures leading to excommunication, on the severity of sanctions on the excommunicant, on the restoration of a repentant individual, and on civil punishment. Calvin and Menno, each a leader of distinct wings of the Reformation, both believed this extreme form of discipline to be essential to the function of the church in society, agreeing on the basic grounds for excommunication as expressed in the New Testament. Menno, however, envisioned the application of reprimand as a process administered by the entire church body against any sin; Calvin reserved excommunication for especially severe transgressions as identified by the Company of Pastors and the Consistory. Among other disagreements, Calvin approved civil punishment for certain forms of unorthodoxy while Menno advocated strict church/state separation. They differed most profoundly in their views on why church discipline was necessary. Simons saw human perfectibility as attainable after conversion, while Calvin stressed an Augustinian theology of human depravity.[7][8]

Menno Simons drew heavily from Biblical images of the bride of Christ when envisioning a new church during the early 17th century. He found in the Biblical Song of Solomon a description of the relationship between a purified church and Christ that not only applied to a reformed church but also to the earthly marriage between man and woman. Like the bride in the songs, the woman must come in total love and devotion and will be cleansed of her natural evil by contact with her husband. He did not alter the conventional view of relations between men and women but idealized the woman's subordinate and asexual status.[9]

The Anabaptists insisted on adult baptism. By contrast Martin Luther defended infant baptism; it stemmed from his view of the church as ideally an inclusive reality in a Christian society. Menno Simons based his rejection of infant baptism on the concept of the church as a disciplined group of individuals who have voluntarily committed their lives to Christ. He viewed sanctification as a lifelong process that does not completely rid the presence of sin from life.[10]

Although some Anabaptists in Amsterdam and Münster in the 16th century engaged in excesses, Dutch Mennonites generally became pious and peaceful. An explanation of this transformation is needed, and the answer may lie in Menno's transformation from Catholic priest and apologist to pacifist Anabaptist reformer—a transformation linked to his relationships to the radical Münsterites and peaceful Melchiorites. In his 1539 Christian Baptism Menno Simons stated his reluctance to engage in disputes, which may have stemmed from his reluctance for years to announce his true convictions.[11]

Menno Simons rejected asceticism in terms of its traditional practices of social withdrawal, mortification, and self-denial. Historical theologian Richard Valantasis, however, has suggested that asceticism should not be defined as these physical practices but as a group of activities designed to reestablish social relations between the individual and the dominant social environment through a new subjectivity, different social relations, and an alternative symbolic universe. Simons's theology is ascetic by Valantasis's definition since it used these methods to restructure Anabaptists' relationship with 'worldly' society.[12]