Christianity in the 18th century

Christianity in the 18th century 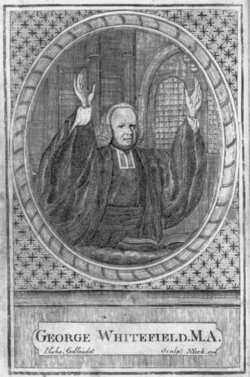 Revivalism refers to the Calvinist and Wesleyan revival, called the Great Awakening, in North America which saw the development of evangelical Congregationalist, Presbyterian, Baptist, and new Methodist churches.

The Calvinist and Wesleyan revival, called the Great Awakening, established the Congregationalist, Presbyterian, Baptist, and new Methodist churches on competitive footing for social influence in North America. However, as that great "revival of religion" began to wane, a new era of secularism began to overwhelm the social gains that had been experienced by Evangelical churches. Furthermore, that revival had popularized the strong opinion that Evangelical religions were weakened and divided, primarily due to unreasonable loyalty to creeds and doctrines which made salvation, and Christian unity, seem unattainable. This sentiment gave rise to the Second Great Awakening which had a strong primitivist theme of trying to restore an older, purer form of Christianity.

The First Great Awakening was a wave of religious enthusiasm among Protestants that swept the American colonies in the 1730s and 1740s, leaving a permanent impact on American religion. It emphasising the traditional Reformed virtues of Godly preaching, rudimentary liturgy, and a deep sense of personal guilt and redemption by Christ Jesus. It resulted from powerful preaching that deeply affected listeners (already church members) with a deep sense of personal guilt and salvation by Christ. Pulling away from ritual and ceremony, the Great Awakening made religion intensely personal to the average person by creating a deep sense of spiritual guilt and redemption. Historian Sydney E. Ahlstrom saw it as part of a "great international Protestant upheaval" that also created Pietism in Germany, the Evangelical Revival, and Methodism in England.[1]

It had a major impact in reshaping the Congregational, Presbyterian, Dutch Reformed, and German Reformed denominations, and strengthened the small Baptist and Methodist denominations. It brought Christianity to the slaves and was an apocalyptic event in New England that challenged established authority. It incited rancor and division between the old traditionalists who insisted on ritual and doctrine and the new revivalists. It had little impact on Anglicans and Quakers.

Unlike the Second Great Awakening that began about 1800 and which reached out to the unchurched, the First Great Awakening focused on people who were already church members. It changed their rituals, their piety, and their self awareness. The new style of sermons and the way people practiced their faith breathed new life into religion in America. People became passionately and emotionally involved in their religion, rather than passively listening to intellectual discourse in a detached manner. Ministers who used this new style of preaching were generally called "new lights", while the preachers of old were called "old lights". People began to study the Bible at home, which effectively decentralized the means of informing the public on religious manners and was akin to the individualistic trends present in Europe during the Protestant Reformation.

The expansion of the Roman Catholic Portuguese Empire and Spanish Empire with a significant roled played by the Roman Catholic Church led to the Christianization of the indigenous populations of the Americas such as the Aztecs and Incas. Later waves of colonial expansion such as the Scramble for Africa or the struggle for India, by the Dutch, England, France, Germany and Russia led to Christianization of other native populations across the globe such as the American Indians, Filipinos, Indians and Africans led to the expansion of Christianity eclipsing that of the Roman period and making it a truly global religion.

In the Americas, the Roman Catholic Church expanded its missions but, until the 19th century, had to work under the Spanish and Portuguese governments and military.[2] Junípero Serra, the Franciscan priest in charge of this effort, founded a series of missions which became important economic, political, and religious institutions.[3] These missions brought grain, cattle and a new way of living to the Indian tribes of California. Overland routes were established from New Mexico that resulted in the colonization of San Francisco in 1776 and Los Angeles in 1781. However, by bringing Western civilization to the area, these missions and the Spanish government have been held responsible for wiping out nearly a third of the native population, primarily through disease.[4]

The Bull of Pope Benedict XIV Ex Quo Singulari from July 11, 1742 repeated verbatim the bull of Clement XI and stressed the purity of Christian teachings and traditions, which must be uphold against all heresies, namely Chinese missionaries were forbidden to take part in honors paid to ancestors, to Confucius, or to the Emperors. This bull virtually destroyed the Jesuit goal, to Christianize the influential upper classes in China.[5] The Vatican policy was the death of the missions in China.[6] Afterwards the Roman Catholic Church experienced missionary setbacks and in 1721 the Chinese Rites controversy led the Kangxi Emperor to outlaw Christian missions.[7] The Chinese emperor felt duped and refused to permit any alteration of the existing Christian practices. He told the visiting papal delegate: "You destroyed your religion. You put in misery all Europeans living here in China."[8] 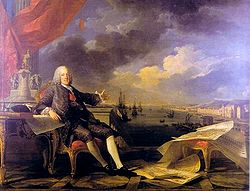 Throughout the inculturation controversy, the very existence of Jesuits were under attack in Portugal, Spain, France, and the Kingdom of Sicily. The inculturation controversy and the Jesuit support for the native Indians in Brazil, Paraguay and Argentina added fuel to growing criticism of the order, which seemed to symbolize the strength and independence of the Church. Defending the rights of native peoples in South America, hindered the efforts of European powers, espcecially Spain and Portugal to maintain absolute rule over their domains.[9] Portugal's Sebastião José de Carvalho e Melo, Marquis of Pombal was the main enemy of the Jesuits. Pope Benedict XIV attempted to keep the Jesuits in existence without any changes: Sint ut sunt aut not sint, They must be the way they are or they will not be,.[10] He went far to mollify Portuguese pride, even allowing the local Cardinal to wear a papal tiara and have his seminarians dressed like cardinals [11] In 1773, European rulers united to force Pope Clement XIV to dissolve the order.[9] Several decades later Pius VII restored the Jesuits in the 1814 papal bull Sollicitudo omnium ecclesiarum.[12]

Matters grew still worse with the violent anti-clericalism of the French Revolution.[13] Direct attacks on the wealth of the Catholic Church and associated grievances led to the wholesale nationalisation of church property and attempts to establish a state-run church.[14] Large numbers of priests refused to take an oath of compliance to the National Assembly, leading to the Catholic Church being outlawed and replaced by a new religion of the worship of "Reason"[14] along with a new French Republican Calendar. In this period, all monasteries were destroyed, 30,000 priests were exiled and hundreds more were killed.[14]

When Pope Pius VI sided against the revolution in the First Coalition, Napoleon Bonaparte invaded Italy. The 82-year-old pope was taken as a prisoner to France in February 1799 and died in Valence August 29, 1799 after six months of captivity. To win popular support for his rule, Napoleon re-established the Catholic Church in France through the Concordat of 1801.[15] All over Europe, the end of the Napoleonic wars signaled by the Congress of Vienna, brought Catholic revival, renewed enthusiasm, and new respect for the papacy following the depredations of the previous era.[16]

In 1721 Tsar Peter I abolished completely the patriarchate and so the Russian Orthodox Church effectively became a department of the government, ruled by a Most Holy Synod composed of senior bishops and lay bureaucrats appointed by the Tsar himself. This continued until the 20th century.