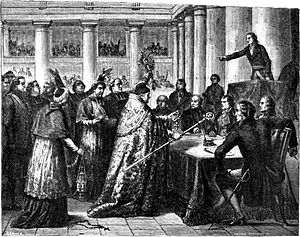 Leaders of the Catholic Church taking the civil oath required by the Concordat.

The Concordat of 1801 was an agreement between Napoleon and Pope Pius VII, signed on 15 July 1801. It solidified the Roman Catholic Church as the majority church of France and brought back most of its civil status.

During the French Revolution, the National Assembly had taken Church properties and issued the Civil Constitution of the Clergy, which made the Church a department of the State, removing it from the authority of the Pope. This caused hostility among the Vendeans towards the change in the relationship between the Catholic Church and the French government. Subsequent laws abolished the traditional Gregorian calendar and Christian holidays.

While the Concordat restored some ties to the papacy, it was largely in favor of the state; the balance of church-state relations had tilted firmly in Napoleon's favour. Now, he could win favor with the Catholics within France while also controlling Rome in a political sense. Napoleon once told his brother Lucien in April 1801, "Skillful conquerors have not got entangled with priests. They can both contain them and use them." [1] As a part of the Concordat, he presented another set of laws called the Organic Articles.

The main terms of the Concordat of 1801 between France and Pope Pius VII included:

The Concordat was abrogated by the law of 1905 on the separation of church and state. However, some terms of the Concordat are still in effect in the Alsace-Lorraine region under the local law of Alsace-Moselle, as the region was controlled by the German Empire at the time of the law's passage.