Dominic was born in Caleruega, halfway between Osma and Aranda de Duero in Old Castile, Spain. He was named after Saint Dominic of Silos, who is said to be the patron saint of hopeful mothers, astronomers, and the Benedictine Abbey of Santo Domingo de Silos, a few miles north of Caleruega.[citation needed]

In the earliest narrative source, by Jordan of Saxony, Dominic's parents are not named. The story is told that before his birth his mother dreamed that a dog leapt from her womb carrying a torch in its mouth, and "seemed to set the earth on fire." This story is likely to have emerged when his order became known, after his name, as the Dominican order, in Latin Dominicanus and by a play of words was interpreted as Domini canis: "Dog of the Lord." Jordan adds that Dominic was brought up by his parents and a maternal uncle who was an archbishop.[4] The failure to name them is not surprising, since Jordan's work is a history of the early years of the Order rather than a biography of Dominic. A later source, still of the 13th century, gives the names of Dominic's mother and father as Juana and Felix.[5] Nearly a century after Dominic's birth, a local author asserts that Dominic's father was "vir venerabilis et dives in populo suo" ("an honoured and wealthy man in his village").[6] The earliest statement that Dominic's father belonged to the family de Guzmán, and that his mother belonged to the Aça or Aza family, occurs in the travel narrative of Pero Tafur, written in 1439 or soon after.[7]

Dominic was educated in the schools of Palencia, afterwards a university, where he devoted six years to the arts and four to theology.[8] In 1191, when Spain was desolated by a season of famine, Dominic was in the midst of his theological studies.[9] Legend holds that he gave away his money and sold his clothes, his furniture and even his precious manuscripts, that he might relieve distress. When, according to this legend, his companions expressed astonishment that he should sell his books, Dominic is said to have replied: "Would you have me study off these dead skins, when men are dying of hunger?"[10] This supposed utterance belongs to the few of Dominic's sayings that it is claimed have passed to posterity. In 1194, around twenty-five years old, Dominic joined the Canons Regular in the canonry of Osma, following the rule of Saint Benedict.[11] 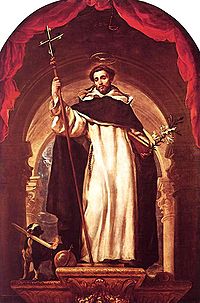 Saint Dominic saw the need for a new type of organization to address the needs of his time, one that would bring the dedication and systematic education of the older monastic orders to bear on the religious problems of the burgeoning population of cities, but with more organizational flexibility than either monastic orders or the secular clergy.

In 1203 or 1204 he accompanied Diego de Acebo, the Bishop of Osma, on a diplomatic mission for Alfonso VIII, King of Castile, in order to secure a bride in Denmark for crown prince Ferdinand.[12] The mission made its way to Denmark via the south of France.

When they crossed the Pyrenees into southern France, Dominic and Diego encountered the Cathars, a Christian religious sect with gnostic and dualistic beliefs, viewed by the Roman Catholic Church as heretical. The Cathars ordained women as well as men; their "clergy" were celibate, vowed to poverty, and not subject to the pontiff's rule. Pope Innocent III initiated the first crusade against European Christian heretics with his Albigensian Crusades against the Cathars. Traveling up again to Denmark in 1204 or 1205 and finding that the intended bride had died, Diego and Dominic returned by way of Rome and Cîteaux.[citation needed]

Foundation of the Dominicans

In 1208 Dominic encountered the papal legates returning in pomp to Rome, foiled in their attempt to counter the growing sect. To them he administered his famous rebuke: "It is not by the display of power and pomp, cavalcades of retainers, and richly-houseled palfreys, or by gorgeous apparel, that the heretics win proselytes; it is by zealous preaching, by apostolic humility, by austerity, by seeming, it is true, but by seeming holiness. Zeal must be met by zeal, humility by humility, false sanctity by real sanctity, preaching falsehood by preaching truth."[citation needed]

A small group of colleagues formed around Dominic, but soon left him since the challenge and rigours of a simple lifestyle together with demanding preaching discouraged them. Finally Dominic gathered a number of men who remained faithful to the vision of active witness to the Albigensians as well as a way of preaching which combined intellectual rigour with a popular and approachable style. By departing from accepted church practices and learning from the Albigensians, Dominic laid the ground for what would become a major tenet of the Dominican order over time – to find truth no matter where it may be.[citation needed]

In 1215, Dominic established himself, with six followers, in a house given by Peter Seila, a rich resident of Toulouse.[13] He subjected himself and his companions to the monastic rules of prayer and penance; and meanwhile bishop Foulques gave them written authority to preach throughout the territory of Toulouse.[14] Thus the scheme of establishing an order of Preaching Friars began to assume definite shape in Dominic's mind.[citation needed]

The final result of his deliberations was the establishment of his order. In the same year, the year of the Fourth Lateran Council, Dominic and Foulques went to Rome to secure the approval of the Pope, Innocent III. Dominic returned to Rome a year later, and was finally granted written authority in December 1216 and January 1217 by the new pope, Honorius III for an order to be named "The Order of Preachers" ("Ordo Praedicatorum", or "O.P.," popularly known as the Dominican Order).[15] This organization has as its motto "to praise, to bless, to preach" (Latin: Laudare, benedicere, praedicare), taken from the Preface of the Blessed Virgin Mary in the Roman Missal.[citation needed] 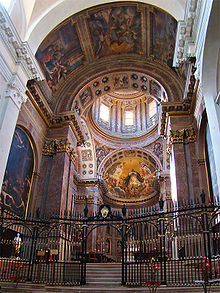 His chapel at Basilica of San Domenico, Bologna

Dominic made his headquarters at Rome,[16] although he traveled extensively to maintain contact with his growing brotherhood of monks.[17] It was in the winter of 1216–1217, at the house of Ugolino de' Conti that he first met William of Montferrat, afterwards a close friend.[18]

When arriving in Bologna on 21 December 1218,[19] he decided that this university city was suitable as his center of activity.[citation needed] Soon a convent was established at the Mascarella church by the Blessed Reginald of Orléans.[20] Soon afterwards they had to move to the church of San Nicolò of the Vineyards.[21] Dominic settled in this church and held in this church the first two General Chapters of the order.[22][23] He died there on 6 August 1221 and was moved into a simple sarcophagus in 1233.[24][25] 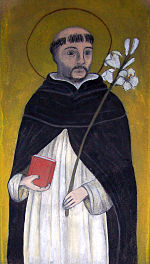 According to Guiraud, Dominic abstained from meat,[27] "observed stated fasts and periods of silence",[28] "selected the worst accommodations and the meanest clothes", and "never allowed himself the luxury of a bed".[29][30] "When travelling, he beguiled the journey with spiritual instruction and prayers" (also Guiraud).[31] Guiraud also states that "as soon as Dominic passed the limits of towns and villages, he took off his shoes, and, however sharp the stones or thorns, he trudged on his way barefooted",[32] and that "rain and other discomforts elicited from his lips nothing but praises to God".[33]

Dominic died at the age of fifty-one, according to Guiraud "exhausted with the austerities and labours of his career".[34] He had reached the convent of St Nicholas at Bologna, Italy, "weary and sick with a fever".[35] Guiraud states that Dominic "made the monks lay him on some sacking stretched upon the ground"[36] and that "the brief time that remained to him was spent in exhorting his followers to have charity, to guard their humility, and to make their treasure out of poverty".[37] He died at noon on 6 August 1221.[38] 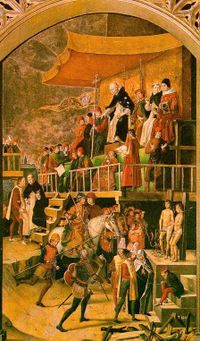 That Dominic was the founder of the Inquisition and the first inquisitor-general has become a part of Roman tradition. It is affirmed by all the historians of the Order, and by all the panegyrists of the Inquisition; it has the sanction of infallibility in the bull Invictarum of Sixtus V, and it is confirmed by quoting a bull of Innocent III, appointing him inquisitor-general. Historian Henry Charles Lea states, "Yet it is safe to say that no tradition of the Church rests on a slenderer basis." However Lea also goes on to state in the same paragraph: "That Dominic devoted the best years of his life to combating heresy there is no doubt, and as little that, when a heretic was deaf to argument or persuasion, he would cheerfully stand by the pyre and see him burned, like any other zealous missionary of the time; but in this he was no more prominent than hundreds of others, and of organized work in this direction he was utterly guiltless.".[40]

What part Dominic personally had in the proceedings of the episcopal Medieval Inquisition has been disputed for many centuries. The historical sources from Dominic's own time period tell us nothing about his involvement in the Inquisition. This is all the more striking when we consider that several early Dominicans, including some of Dominic's first followers, did become inquisitors. In fact, the notion that Dominic had been an inquisitor only began in the 14th century through the writings of a famous Dominican inquisitor, Bernard Gui, who tried to paint his Order's founder as a participant in the Institution. In the 15th century, Dominic would be depicted as presiding at an auto da fé, later offering German Protestant critics of the Catholic Church a convenient publicity weapon against the very Order whose theologically informed preaching had proven to be a formidable opponent in the lands of the Reformation.[citation needed] Thus a 14th century invention soon became a part of the Black Legend.

Jacques Échard even argued that Dominic could not be an inquisitor because the institution was not established until 1231 by Pope Gregory IX.[41] Some others call the Saint "the first inquisitor" according to a statement of Pope Sixtus V (1588) with no other historical basis.[41]

The spread of the Rosary, a Marian devotion, is attributed to the preaching of St. Dominic,[42][43] though this fact is disputed among historians.[citation needed] The Rosary has for centuries been at the heart of the Dominican Order. Pope Pius XI stated that: "The Rosary of Mary is the principle and foundation on which the very Order of Saint Dominic rests for making perfect the life of its members and obtaining the salvation of others." [44]

For centuries, Dominicans have been instrumental in spreading the rosary and emphasizing the Catholic belief in the power of the rosary.[45]