A polymath whose fields of interest and contribution included law, theology, philosophy, and music, before being ordained, he served as a Chief Administrator to the Muslim caliph of Damascus, wrote works expounding the Christian faith, and composed hymns which are still in everyday use in Eastern Christian monasteries throughout the world. He is considered "the last of the Fathers" of the Eastern Orthodox church and is best known for his stong defense of icons.[2] The Catholic Church regards him as a Doctor of the Church, often referred to as the Doctor of the Assumption due to his writings on the Assumption of Mary.[3] 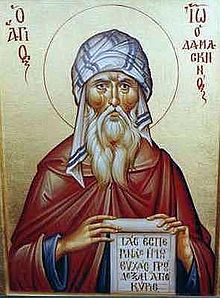 The most commonly used source for information on the life of John of Damascus is a work attributed to one John of Jerusalem, identified therein as the Patriarch of Jerusalem.[4] It is actually an excerpted translation into Greek of an earlier Arabic text. The Arabic original contains a prologue not found in most other translations that was written by an Arabic monk named Michael who relates his decision to write a biography of John of Damascus in 1084, noting that none was available in either Greek or Arabic at the time. The main text that follows in the original Arabic version seems to have been written by another, even earlier author, sometime between the early 9th and late 10th centuries AD.[4] Written from a hagiographical point of view and prone to exaggeration, it is not the best historical source for his life, but is widely reproduced and considered to be of some value nonetheless.[5] The hagiographic novel Barlaam and Josaphat, traditionally attributed to John, is in fact a work of the 10th century.[6]

John was born into a prominent family known as Mansour (Arabic: المنصور‎ al-Mansǔr, "the victorious one") in Damascus in the 7th century AD.[7][8] He was named Mansur ibn Sarjun (Arabic: منصور بن سرجون‎) after his grandfather Mansur, who had been responsible for the taxes of the region under the Emperor Heraclius.[7] The lack of a document attesting to his specific tribal lineage has lscholars attributing him either to the Taghlib or the Kalb, two prominent Christian Arab tribes in the Syrian desert.[9] Whatever the case, John of Damascus had two names: Mansur ibn Sarjun, his Arabic name, and John of Damascus, his Christian name. His full name is given by Agapius as Iyanis (or Yuhanna) b. Mansur al-Dimashqi.[10]

Eutychius, a 10th century Melkite patriarch mentions a certain Arab governor of the city who surrendered the city to the Muslims, probably John's grandfather Mansur Bin Sargun. [11] When the region came under Arab Muslim rule in the late 7th century AD, the court at Damascus remained full of Christian civil servants, John's grandfather among them.[7][12] John's father, Sarjun (Sergius) or Ibn Mansur, went on to serve the Umayyad caliphs, supervising taxes for the entire Middle East.[7] After his father's death, John also served as a high official to the caliphate court before leaving to become a monk and adopting the monastic name John at Mar Saba, where he was ordained as a priest in 735.[7][8]

Until the age of 12, John apparently undertook a traditional Muslim education.[13] One of the vitae describes his father's desire for him to, "learn not only the books of the Muslims, but those of the Greeks as well."[13] John grew up bilingual and bicultural, living as he did at a time of transition from Late Antiquity to Early Islam.[13]

Other sources describes his education in Damascus as having been conducted in a traditional Hellenic way, termed "secular" by one source and "Classical Christian" by another.[14][15] One account identifies his tutor as a monk by the name of Cosmas, who had been captured by Arabs from his home in Sicily, and for whom John's father paid a great price. Under the instruction of Cosmas, who also taught John's orphan friend (the future St. Cosmas of Maiuma), John is said to have made great advances in music, astronomy and theology, soon rivaling Pythagoras in arithmetic and Euclid in geometry.[15] The monk Cosmas was a refugee from Italy, and brought with him influences of Western scholarship and Scholastic thought which informed John's later writings.[16]

In the early 8th century AD, iconoclasm, a movement seeking to prohibit the veneration of the icons, gained some acceptance in the Byzantine court. In 726, despite the protests of St. Germanus, Patriarch of Constantinople, Emperor Leo III issued his first edict against the veneration of images and their exhibition in public places.[17] A talented writer in the secure surroundings of the caliph's court, John of Damascus initiated a defense of holy images in three separate publications. "Apologetic Treatises against those Decrying the Holy Images", the earliest of these works gained him a reputation. Not only did he attack the emperor, but the use of a simpler literary style brought the controversy to the common people, inciting revolt among those of Christian faith. His writings later played an important role during the Second Council of Nicaea which met to settle the icon dispute.

To counter his influence, Leo III sent forged documents implicating John of Damascus in a plot to attack Damascus to the caliph.[17] The caliph did not suspect the forgery, and ordered John's right hand to be cut off and hanged publicly. Some days afterwards, John asked that his hand be given back to him, which was granted. He prayed fervently to the Theotokos in front of her icon, and his hand is said to have been miraculously restored.[18] Being grateful for this healing, he attached a silver hand on this icon, which is since then known as "Three-handed", or Tricherousa.[19]

After this event, John asked to leave his post and retired to Mar Saba monastery near Jerusalem. There, he studied, wrote and preached and was ordained a priest in 735.[8]

John died in 749 as a revered Father of the Church, and is recognized as a saint. He is sometimes called the last of the Church Fathers by the Roman Catholic Church. In 1883 he was declared a Doctor of the Church by the Holy See.

When the name of Saint John of Damascus was inserted in the General Roman Calendar in 1890, it was assigned to 27 March. This date always falls within Lent, a period during which there are no obligatory Memorials. The feast day was therefore moved in 1969 to the day of the saint's death, 4 December, the day on which his feast day is celebrated also in the Byzantine Rite calendar.[20]

Besides his purely textual works, many of which are listed below, John of Damascus also composed hymns, perfecting the canon, a structured hymn form used in Eastern Orthodox church services.[21]