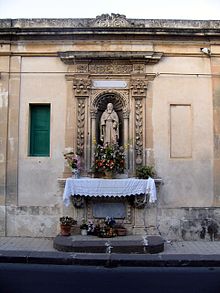 Veneration (Latin veneratio, Greek δουλεία, douleia), or veneration of saints, is a special act of honoring a saint: an angel, or a dead person who has been identified by a church committee as singular in the traditions of the religion. It is practiced by the Eastern Orthodox Church, the Roman Catholic, and Eastern Catholic Churches. In some denominations, veneration is shown outwardly by respectfully bowing or making the sign of the cross before a saint's icon, relics, or statue.

In Roman Catholic, and Orthodox theology, veneration is a type of honor distinct from the adoration due to God alone. According to Deacon Dr. Mark Miravelle, of Franciscan University of Steubenville, the English word "worship" has been associated with both veneration and adoration:

Adoration, which is known as latria in classical theology, is the worship and homage that is rightly offered to God alone. It is the acknowledgement of excellence and perfection of an uncreated, divine person. It is the worship of the Creator that God alone deserves. Veneration, known as dulia in classical Catholic theology, is the honor due to the excellence and a created person. This refers to the excellence exhibited by the created being who likewise deserves recognition and honor. We see a general example of veneration in events like the awarding of academic awards for excellence in school, or the awarding of the Olympic medals for excellence in sports. There is nothing contrary to the proper adoration of God when we offer the appropriate honor and recognition that created persons deserve based on achievement in excellence. Here a further clarification should be made regarding the use of the term "worship" in relation to the categories of adoration and veneration. Some schools of theology use the term "worship" to introduce both adoration and veneration. They would distinguish between "worship of adoration" and "worship of veneration." The word "worship" (in the same way the theological term "cult" is traditionally used) in these classical definitions was not at all synonymous with adoration, but could be used to introduce either adoration or veneration. Hence Catholic writers will sometimes use the term "worship" not to indicate adoration, but only the worship of veneration given to Mary and the saints.[1]

Church theologians have long adopted the terms latria for the type of worship due to God alone, and dulia for the veneration given to saints and icons. Catholic theology also includes the term hyperdulia for the type of veneration specifically paid to Mary, mother of Jesus, in Catholic tradition. This distinction is spelled out in the dogmatic conclusions of the Seventh Ecumenical Council (787), which also decreed that iconoclasm (forbidding icons and their veneration) is a heresy that amounts to a denial of the incarnation of Jesus.

Now, the Roman Catholic tradition has a well established philosophy for the veneration of the Virgin Mary via the field of Mariology with Pontifical schools such as the Marianum specifically devoted to this task.[2][3][4]

In Protestantism churches, veneration is sometimes considered to amount to the heresy of idolatry, and the related practice of canonization amounts to the heresy of apotheosis. Protestant theology usually denies that any real distinction between veneration and worship can be made, and claims that the practice of veneration distracts the Christian soul from its true object, the worship of God. In his Institutes of the Christian Religion, John Calvin writes that "(t)he distinction of what is called dulia and latria was invented for the very purpose of permitting divine honours to be paid to angels and dead men with apparent impunity." Likewise, Islam also condemns any veneration of icons. The Hindu honoring of icons and murtis, often seen as idolatry, may also be looked upon as a kind of veneration.

In Green Christianity (or Creation-centered theology) animals, plants, and other parts of nature may be said to be venerated simply by taking good care of them, thereby showing honor and respect for God who made them. Creation, being regarded as an icon of the Creator, is a valid object of veneration.

Philologically, to venerate derives from the Latin verb, venerare, meaning to regard with reverence and respect.