Albertus Magnus, O.P. (1193/1206 – November 15, 1280), also known as Albert the Great and Albert of Cologne, is a Catholic saint. He was a German Dominican friar and a bishop, who achieved fame for his comprehensive knowledge of and advocacy for the peaceful coexistence of science and religion. Those such as James A. Weisheipl and Joachim R. Söder have referred to him as the greatest German philosopher and theologian of the Middle Ages, an opinion supported by contemporaries such as Roger Bacon.[1] The Catholic Church honours him as a Doctor of the Church, one of only 34 persons with that honor.

He was born sometime between 1193 and 1206, to the Count of Bollstädt in Lauingen in Bavaria.[2] Contemporaries such as Roger Bacon applied the term "Magnus" to Albertus during his own lifetime, referring to his immense reputation as a scholar and philosopher.

Albertus was educated principally at Padua, where he received instruction in Aristotle's writings. A late account by Rudolph de Novamagia refers to Albertus' encounter with the Blessed Virgin Mary, who convinced him to enter Holy Orders. In 1223 (or 1221) he became a member of the Dominican Order, against the wishes of his family, and studied theology at Bologna and elsewhere. Selected to fill the position of lecturer at Cologne, Germany, where the Dominicans had a house, he taught for several years there, at Regensburg, Freiburg, Strasbourg and Hildesheim. In 1245 he went to Paris, received his doctorate and taught for some time as a master of theology with great success. During this time Thomas Aquinas began to study under Albertus. 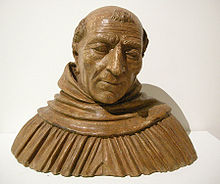 In 1254 Albertus was made provincial of the Dominican Order, and fulfilled the arduous duties of the office with great care and efficiency. During his tenure he publicly defended the Dominicans against attacks by the secular and regular faculty of the University of Paris, commented on St John, and answered what he perceived as errors of the Arabian philosopher Averroes.

In 1260 Pope Alexander IV made him Bishop of Regensburg, an office from which he resigned after three years. During the exercise of his duties he enhanced his reputation for humility by refusing to ride a horse—in accord with the dictates of the Dominican order—instead walking back and forth across his huge diocese. This earned him the affectionate sobriquet, "boots the bishop," from his parishioners. After his stint as bishop, he spent the remainder of his life partly in retirement in the various houses of his order, yet often preaching throughout southern Germany. In 1270 he preached the eighth Crusade in Austria. Among the last of his labors was the defense of the orthodoxy of his former pupil, Thomas Aquinas, whose death in 1274 grieved Albertus. After suffering a collapse of health in 1278, he died on November 15, 1280, in Cologne, Germany. His tomb is in the crypt of the Dominican church of St. Andreas in Cologne, and his relics at the Cologne Cathedral.

Albertus is frequently mentioned by Dante, who made his doctrine of free will the basis of his ethical system. In his Divine Comedy, Dante places Albertus with his pupil Thomas Aquinas among the great lovers of wisdom (Spiriti Sapienti) in the Heaven of the Sun. Albertus is also mentioned, along with Agrippa and Paracelsus, in Mary Shelley's Frankenstein, where his writings serve as an influence to a young Victor Frankenstein.

Albertus was beatified in 1622. He was canonized and proclaimed a Doctor of the Church in 1931 by Pope Pius XI. St Albert's feast day is celebrated on November 15. 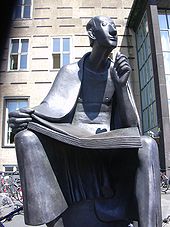 Albertus Magnus monument at the University of Cologne.

Albertus' writings collected in 1899 went to thirty-eight volumes. These displayed his prolific habits and literally encyclopedic knowledge of topics such as logic, theology, botany, geography, astronomy, astrology, mineralogy, chemistry, zoology, physiology, phrenology and others; all of which were the result of logic and observation. He was perhaps the most well-read author of his time. He digested, interpreted and systematized the whole of Aristotle's works, gleaned from the Latin translations and notes of the Arabian commentators, in accordance with Church doctrine. Most modern knowledge of Aristotle was preserved and presented by Albertus.

Albertus' activity, however, was more philosophical than theological (see Scholasticism). The philosophical works, occupying the first six and the last of the twenty-one volumes, are generally divided according to the Aristotelian scheme of the sciences, and consist of interpretations and condensations of Aristotle's relative works, with supplementary discussions upon contemporary topics, and occasional divergences from the opinions of the master.

His principal theological works are a commentary in three volumes on the Books of the Sentences of Peter Lombard (Magister Sententiarum), and the Summa Theologiae in two volumes. The latter is in substance a more didactic repetition of the former. Albertus's knowledge of physical science was considerable and for the age remarkably accurate. His industry in every department was great, and though we find in his system many gaps which are characteristic of scholastic philosophy, his protracted study of Aristotle gave him a great power of systematic thought and exposition. An exception to this general tendency is his Latin treatise "De falconibus" (later inserted in the larger work, De Animalibus, as book 23, chapter 40), in which he displays impressive actual knowledge of a) the differences between the birds of prey and the other kinds of birds; b) the different kinds of falcons; c) the way of preparing them for the hunt; and d) the cures for sick and wounded falcons.[3] His scholarly legacy justifies his contemporaries' bestowing upon him the honourable surname Doctor Universalis.

In the centuries since his death, many stories arose about Albertus as an alchemist and magician. On the subject of alchemy and chemistry, many treatises relating to Alchemy have been attributed to him, though in his authentic writings he had little to say on the subject, and then mostly through commentary on Aristotle. For example, in his commentary, De mineralibus, he refers to the power of stones, but does not elaborate on what these powers might be.[4] A wide range of Pseudo-Albertine works dealing with alchemy exist, though, showing the belief developed in the generations following Albert's death that he had mastered alchemy, one of the fundamental sciences of the Middle Ages. These include Metals and Materials; the Secrets of Chemistry; the Origin of Metals; the Origins of Compounds, and a Concordance which is a collection of Observations on the philosopher's stone; and other alchemy-chemistry topics, collected under the name of Theatrum Chemicum.[5] He is credited with the discovery of the element arsenic[6] and experimented with photosensitive chemicals, including silver nitrate.[7][8] He did believe that stones had occult properties, as he related in his work De mineralibus. However, there is scant evidence that he personally performed alchemical experiments. Much of the modern confusion results from the fact that later works, particularly the alchemical work known as the Secreta Alberti or the Experimenta Alberti, were falsely attributed to Albertus by their authors in order to increase the prestige of the text through association.[citation needed]

According to legend, Albertus Magnus is said to have discovered the philosopher's stone and passed it to his pupil Thomas Aquinas, shortly before his death. Magnus does not confirm he discovered the stone in his writings, but he did record that he witnessed the creation of gold by "transmutation."[9] Given that Thomas Aquinas died six years before Albertus Magnus' death, this legend as stated is unlikely.

However, it is true that Albertus was deeply interested in astrology, as has been articulated by scholars such as Paola Zambelli.[10] While today we would view this as evidence of superstition, in the high Middle Ages—and well into the early modern period—few intellectuals, if any, questioned the basic assumptions of astrology: humans live within a web of celestial influences that affect our bodies, and thereby motivate us to behave in certain ways. Within this worldview, it was logical to believe that astrology could be used to predict the probable future of a human being. Albertus made this a central component of his philosophical system, arguing that an understanding of the celestial influences affecting us could help us to live our lives more in accord with Christian precepts. The most comprehensive statement of his astrological beliefs is to be found in a work he authored around 1260, now known as the Speculum astronomiae. However, details of these beliefs can be found in almost everything he wrote, from his early Summa de bono to his last work, the Summa theologiae.

Albertus is known for his enlightening commentary on the musical practice of his times. Most of his written musical observations are found in his commentary on Aristotle's Poetics. He rejected the idea of "music of the spheres" as ridiculous: movement of astronomical bodies, he supposed, is incapable of generating sound. He also wrote extensively on proportions in music, and on the three different subjective levels on which plainchant could work on the human soul: purging of the impure; illumination leading to contemplation; and nourishing perfection through contemplation. Of particular interest to 20th century music theorists is the attention he paid to silence as an integral part of music. The iconography of the tympanum and archivolts of the late-13th century portal of Strasbourg Cathedral was inspired by the writings of Albertus Magnus.[11] Albertus is recorded as having made a mechanical automaton in the form of a brass head that would answer questions put to it. Such a feat was also attributed to Roger Bacon.[12]

In The Concept of Anxiety Søren Kierkegaard wrote that Albert Magnus, "arrogantly boasted of his speculation before the deity and suddenly became stupid." Kierkegaard cites G. O. Marbach who he quotes as saying "Albertus repente ex asino factus philosophus et ex philosopho asinus" [Albert was suddenly transformed from an ass into a philosopher and from a philosopher into an ass].[13]

In 1968, he was cited by William F. Buckley as one of several historical figures whose best qualities would be emulated by the ideal President.

The typeface Albertus is named in his memory.

In Mary Shelley's Frankenstein, Albertus Magnus is referred to as one of Victor Frankenstein's chosen readings. He is also referred to in Nathaniel Hawthorne's The Birth-mark and Herman Melville's The Bell Tower. In Terry Pratchett's Discworld novels, the character of Alberto Mallich (founder of the Unseen University and later Death's manservant Albert) is a sly nod to Albertus Magnus in his more legendary and esoteric guise. Walter M. Miller, Jr.'s novel A Canticle for Leibowitz centers on a monastic order called the Albertian Order of Leibowitz, named by its founder after Albertus Magnus and dedicated to preserving scientific knowledge lost after a nuclear war.

The Academy for Science and Design in New Hampshire honored Albertus by naming one of its four houses Magnus House.

The Albertus-Magnus-Gymnasium is found in Regensburg, Germany.

In Managua, Nicaragua, the Albertus Magnus International Institute, a business and economic development research center, was founded in 2004.

In the Philippines, the Albertus Magnus Building at the University of Santo Tomas that houses the Conservatory of Music, College of Tourism and Hospitality Management, College of Education, and UST Education High School is named in his honor. The Saint Albert the Great Science Academy in San Carlos City, Pangasinan, which offers preschool, elementary and high school education, takes pride in having St. Albert as their patron saint. Its main building was named Albertus Magnus Hall in 2008.