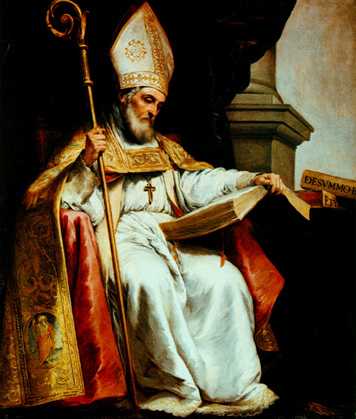 Saint Isidore of Seville (Spanish: _es. "San Isidro" or _es. "San Isidoro de Sevilla", : _la. "Isidorus Hispalensis") (c. 560 &ndash; , ) was of for more than three decades and has the reputation of being one of the great scholars of the early . All the later medieval history-writing of (the , comprising modern and ) were based on his histories.

At a time of disintegration of classical culture, and aristocratic violence and illiteracy, he was involved in the conversion of the royal Visigothic Arians to Catholicism, both assisting his brother , and continuing after his brother's death. Like Leander, he took a most prominent part in the and Seville. The Visigothic legislation which resulted from these councils is regarded by modern historians as exercising an important influence on the beginnings of representative government.

Isidore was born in , to Severianus and Theodora, part of an influential family who were instrumental in the political-religious manoeuvring that converted the Visigothic kings from Arianism to Catholicism, and were all awarded sainthoods:
*His elder brother, Leander, was his immediate predecessor in the Catholic Metropolitan See of Seville, and while in office opposed king
*A younger brother, Fulgentius, was awarded the Bishopric of at the start of the new reign of the Catholic King .
*His sister was a nun, and is said to have ruled over forty convents and one thousand religious.

Isidore received his elementary education in the Cathedral school of Seville. In this institution, which was the first of its kind in Hispania, the trivium and were taught by a body of learned men, among whom was the archbishop, Leander. With such diligence did he apply himself to study that in a remarkably short time mastered Latin, Greek, and Hebrew.

Whether Isidore ever embraced monastic life or not is still an open question, but though he himself may never have been affiliated with any of the religious orders, he esteemed them highly &mdash; on his elevation to the he immediately constituted himself protector of the monks and in 619 he pronounced anathema against any ecclesiastic who should in any way molest the monasteries.

After the death of Leander, Isidore succeeded to the See of Seville.

His long incumbency in this office was spent in a period of disintegration and transition. The ancient institutions and classic learning of the were fast disappearing. For almost two centuries the had been in full control of Hispania, and their barbarous manners and contempt of learning threatened greatly to put back her progress in civilization.

Realizing that the spiritual as well as the material well-being of the nation depended on the full assimilation of the foreign elements, Isidore set himself to the task of welding into a homogeneous nation the various peoples who made up the Gothic kingdom. To this end he availed himself of all the resources of religion and education. His efforts were attended with complete success. , which had taken deep root among the , was eradicated, and the new of Acephales was completely stifled at the very outset; religious discipline was everywhere strengthened.

Isidore presided over the Second Council of Seville, begun , , in the reign of King . The bishops of Gaul and Narbonne attended, as well as the Hispanic prelates. In the Council's Acts the nature of Christ is fully set forth, countering Arian conceptions.

At this council, begun , , all the bishops of Hispania were in attendance. Isidore, though far advanced in years, presided over its deliberations, and was the originator of most of its enactments.

The council probably expressed with tolerable accuracy the mind and influence of Isidore. The position and deference granted to the king is remarkable. The Church is free and independent, yet bound in solemn allegiance to the acknowledged king: nothing was said of allegiance to the Bishop of Rome.

It was at the Fourth National Council of Toledo and through his influence that a decree was promulgated commanding and requiring all bishops to establish seminaries in their Cathedral Cities, along the lines of the school associated with Isidore already existing at Seville. Within his own jurisdiction he had availed himself of the resources of education to counteract the growing influence of Gothic barbarism. His was the quickening spirit that animated the educational movement of which Seville was the centre. The study of Greek and Hebrew, as well as the liberal arts, was prescribed. Interest in and was also encouraged. Through the authority of the fourth council this policy of education was made obligatory upon all the bishops of the kingdom.

Isidore's Latin style in the "Etymologiae" and elsewhere, though simple and lucid, cannot be said to be classical, affected as it was by local Visigothic traditions. It discloses most of the imperfections peculiar to all ages of transition and particularly reveals a growing Visigothic influence. Isidore can possibly be characterized as the world's last native speaker of .

Long before the had awakened to an appreciation of Greek Philosophy, he had introduced Aristotle to his countrymen. He was the first writer to essay the task of compiling for his co-religionists a summa of universal knowledge, in the form of his most important work, the "" (taking its title from the method he used in the transcription of his era's knowledge). It is also known by classicists as the "Origines" (the standard abbreviation being "Orig."). This — the first known to be compiled in medieval civilization — epitomized all learning, ancient as well as modern, forming a huge compilation of 448 chapters in 20 volumes. In it many fragments of classical learning are preserved which otherwise would have been hopelessly lost but, on the other hand, some of these fragments were lost in the first place because Isidore’s work was so highly regarded that it superseded the use of many individual works of the classics themselves, which were not recopied and have therefore been lost.

The fame of this work imparted a new impetus to encyclopedic writing, which bore abundant fruit in the subsequent centuries of the . It was the most popular compendium in libraries. It was printed in at least 10 editions between 1470 and 1530, showing Isidore's continued popularity in the . Until the twelfth century brought translations from Arabic sources, Isidore transmitted what western Europeans remembered of the works of and other Greeks, although he understood only a limited amount of Greek. The "Etymologiae" was much copied, particularly into medieval bestiaries.

The shape of the Earth

Isidore taught in the "Etymologiae" that the Earth was round. His meaning was ambiguous and some writers think he referred to a disc-shaped Earth; his other writings make it clear, however, that he considered the Earth to be globular. [Isidore, "Etymologiae", XIV.ii.1 [http://www.thelatinlibrary.com/isidore/14.shtml] ; Wesley M. Stevens, "The Figure of the Earth in Isidore's De natura rerum", "Isis", 71(1980): 268-277.] He also admitted the possibility of people dwelling at the , considering them as legendary [Isidore, "Etymologiae", XIV.v.17 [http://www.thelatinlibrary.com/isidore/14.shtml] .] and noting that there was no evidence for their existence. [Isidore, "Etymologiae", IX.ii.133 [http://www.thelatinlibrary.com/isidore/9.shtml] .] Isidore's disc-shaped analogy continued to be used through the Middle Ages by authors clearly favouring a spherical Earth, e.g. the 9th century bishop who compared the habitable part of the northern hemisphere ('s northern temperate clime) with a wheel, imagined as a slice of the whole sphere. See also: .

On the Catholic Faith against the Jews

His other works include
*" [http://www.forumromanum.org/literature/isidorus_hispalensis/historia.html Historia de regibus Gothorum, Vandalorum et Suevorum] " (a history of the Goths, Vandals and Suebi) la icon
*his "Chronica Majora" (a )
*"De differentiis verborum", which amounts to brief theological treatise on the doctrine of the Trinity, the nature of Christ, of Paradise, angels, and men.
*"On the Nature of Things" (not the poem of , but the book of astronomy and natural history dedicated to the Visigothic king )
*"Questions on the Old Testament".
*a mystical treatise on the allegorical meanings of numbers
*a number of brief letters
*"Sententiae libri tres" ( [http://www.cesg.unifr.ch/cesg-cgi/kleioc/g0010/exec/pagesmaframe/%22csg-0228_001.jpg%22/segment/%22body%22 Codex Sang. 228] , 9th century)

Isidore was the last of the ancient Christian philosophers, as he was the last of the great Latin s. Some consider him to be the most learned man of his age, and he exercised a far-reaching and immeasurable influence on the educational life of the Middle Ages. His contemporary and friend, , Bishop of , regarded him as a man raised up by God to save the Iberian peoples from the tidal wave of barbarism that threatened to inundate the ancient civilization of Hispania. The Eighth Council of Toledo (653) recorded its admiration of his character in these glowing terms: "The extraordinary doctor, the latest ornament of the Catholic Church, the most learned man of the latter ages, always to be named with reverence, Isidore". This tribute was endorsed by the Fifteenth Council of Toledo, held in 688.
*His remains were transferred to the in Leon, when Seville was overrun during the Arab conquest of Spain.
*In 's Paradise ("Paradiso"' X.130), he is mentioned among theologians and Doctors of the Church alongside the Scot and the Englishman Bede the Venerable.
*He was canonized a by the in 1598 by and declared a in 1722 by .
*In 2003 he was proposed as the of the Internet, but was not among the top six vote totals in an Italian Internet poll. [ [http://www.santiebeati.it/patrono.html Santi e Beati] it icon]