The Byzantine Rite, sometimes called the Rite of Constantinople or Constantinopolitan Rite is the liturgical rite used currently (in various languages, with various uses) by all the Eastern Orthodox Churches, by the Greek Catholic Churches (Eastern Catholic Churches which use the Byzantine Rite), and by the Protestant Ukrainian Lutheran Church. The rite developed in the city of Constantinople (now Istanbul). It is the second largest liturgical rite in Christendom, second in worldwide usage only to the Roman Rite.

The Rite consists of the Divine Liturgies, Canonical Hours, forms for the administration of Sacred Mysteries (sacraments) and the numerous prayers, blessings, and exorcisms, developed in the Church of Constantinople. Also involved are the specifics of architecture, icons, liturgical music, vestments and traditions which have evolved over the centuries in the practice of this Rite.

Traditionally, the congregation stands throughout the whole service, and an iconostasis separates the sanctuary from the rest of the church. The faithful are very active in their worship, making frequent bows and prostrations, and feeling free to move about the temple (church building) during the services.

Scripture plays a large role in Byzantine worship, with not only daily readings but also many quotes from the Bible throughout the services. The entire Psalter is chanted each week, and twice weekly during Great Lent.

Fasting laws are stricter than in the West. On fast days, the faithful give up not only meat, but also dairy products, and on many fast days they also give up fish, wine and the use of oil in cooking. The Rite of Constantinople observes four fasting seasons: Great Lent, Nativity Fast, Apostles' Fast and Dormition Fast. In addition, most Wednesdays and Fridays throughout the year are fast days. Many monasteries also observe Monday as a fast day. 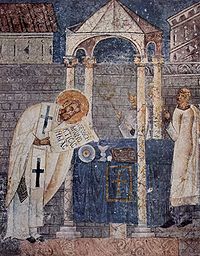 Fresco of Basil the Great in the cathedral of Ohrid. The saint is shown consecrating the Gifts during the Divine Liturgy which bears his name.

The tradition of the Church of Constantinople ascribes the oldest of its two main Divine Liturgies to St. Basil the Great (d. 379), Metropolitan of Cæsarea in Cappadocia. This tradition is confirmed by the witness of several ancient authors, some of whom were contemporaries.[2][3][4] It is certain that St. Basil made a reformation of the Liturgy of his Church, and that the Byzantine service called after him represents his reformed Liturgy in its chief parts, although it has undergone further modification since his time.[5] St. Basil himself speaks on several occasions of the changes he made in the services of Cæsarea.[6][7] and other contemporary witnesses attest his arrangement of the services. Basil had as his goal the streamlining of the services to make them more cohesive and attractive to the faithful. He also worked to reform the clergy and improve the moral life of Christians. He shortened the services and wrote a number of new prayers. The most important work attributed to him is the Divine Liturgy of St. Basil. He took as his basis the Liturgy of St. James as it was celerated at his time in the region of Cappadocia, as well as some liturgical elements recorded in the Apostolic Constitutions.[5] Over time, the Liturgy of Saint Basil gained wide usage in Asia Minor and Syria. Peter the Deacon mentions that Basil's Liturgy was "used by nearly the whole East"; [5] however, the Coptic rite uses another Liturgy which is also attributed to Saint Basil, [8] so Peter the Deacon's reference may not be to the Liturgy of St. Basil used in the Byzantine Rite.

Saint Basil's liturgical work was continued by John Chrysostom (died c. 407), Patriarch of Constantinople. He wrote new (and shorter) prayers for the Divine Liturgy, as well as other prayers. The Divine Liturgy of St. John Chrysostom is the most common form of the Liturgy used in the Constantinopolitan Rite, and his Catechetical Homily is an important part of the Byzantine Paschal Vigil.

Further developments continued to occur, centered mostly around Constantinople and Mount Athos. Monasticism played an important role in the development of the rituals. In Constantinople, the work of the monastery of the Studion greatly enriched the liturgical traditions, especially with regard to the Lenten observance. Iconography continued to develop and a canon of traditional patterns evolved which still influences Eastern religious art to this day.

Two distinctive liturgical traditions developed: the "Cathedral Rite", strongly influenced by Byzantine court ritual and its interface with the liturgy at the Great Church of Hagia Sophia in Constantinople, and the "Monastic Rite" developed in the great monasteries of the East. Eventually these distinct traditions merged and coalesced into the services as they are observed today.

Historical events have also influenced the development of the liturgy. The great Christological and Trinitarian controversies of Late Antiquity are reflected in the glorifications of the Trinity heard in the numerous ekphonies encountered during the services. In response to Nestorius' attack on giving the title of Theotokos to the Virgin Mary, the Byzantines increased the use of the term in the liturgy, and now almost every string of hymns ends with one in her honour, called a Theotokion.

It must be borne in mind that neither the Liturgies of Basil nor John Chrysostom as they are known today reflect exactly the services celebrated in their day. All liturgical rites change and develop over time. As new saints are glorified (canonized), new hymns are composed; as new needs arise, new prayers are written. The Rite also profits from the fact that the Christian East is not so centralized in ecclesiastical polity as the West. This allows for greater diversity, and as members of one church visit another, a natural cross-pollination occurs with resultant enrichment on all sides. In spite of its great emphasis on tradition, the Byzantine Rite comprises a constantly growing and expanding ritual, with room for local practice.

The Divine Liturgy is normally not celebrated daily except in cathedrals and larger monasteries. However, most parishes and smaller monasteries serve the Liturgy on Saturdays, Sundays, and major feast days throughout the year.

The Divine Liturgy is celebrated with particular solemnity whenever a bishop is serving. Though other services are also affected by the presence of a bishop, none more so than the Liturgy.

The daily chanting of the Canonical Hours has developed over the centuries into an intricate pattern of worship drawing on influences from the Temple in Jerusalem, classical poetry, Byzantine hymnography, monastic spirituality, and imperial court ritual. Numerous cycles combine and make use of a vast array of liturgical texts making the Byzantine Rite one of the richest liturgical traditions in Christianity (for more detail, see Canonical Hours: Eastern Orthodox and Greek-Catholic usage).

The daily cycle of services consists of the following:

The Divine Liturgy is not ennumerated among these services of the daily cycle because the Liturgy is considered to exist outside of time.

On the Great Feasts of the liturgical year as well as on certain feast days (and in the Slavic tradition, on every Saturday night) there is a particularly solemn service called the All-Night Vigil which combines Vespers, Matins and First Hour with special additions into a single long service.

All of these services are considered communal prayer, and there are in addition Morning Prayers and Evening Prayers, as well as numerous devotional services, such as Akathists, Canons, Molebens, Panikhidas, etc. which are either prayed by the individual privately or are served on behalf of an individual or group rather than the entire local church. The most important of the private prayers is the Jesus Prayer (Prayer of the Heart) and the entire Hesychastic tradition that has grown up around it.

Sacraments and other services performed as needed

The fixed portion of the liturgical year begins on September 1. There is also a moveable Paschal cycle which is fixed according to the date of Pascha (Easter), by far the most important day of the entire year. The interplay of these two cycles, plus other lesser cycles influences the manner in which the services are celebrated on a day to day level throughout the entire year.

Traditionally, the Eastern Orthodox and Byzantine Catholic churches used the Julian Calendar to calculate their feast days. Beginning in 1924 the Patriarchate of Constantinople made an adjustment to their liturgical year to bring the fixed cycle in conformity to the modern Gregorian Calendar. The Paschal cycle, however, continued to be calculated according to the Julian Calendar. This composite calendar is known as the Revised Julian Calendar. Constantinople's example was followed by the Church of Greece as well as a number of other autocephalous churches. Today, some churches continue to follow the Julian Calendar while others follow the Revised Julian Calendar. Only the Orthodox Church of Finland has adopted the Western calculation of the date of Pascha (see computus); all other Orthodox Churches, and a number of Eastern Catholic Churches, celebrate Pascha at the same time, according to the ancient rules. 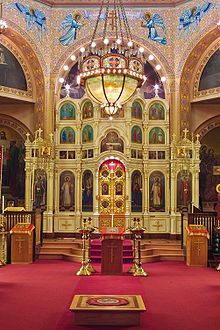 Note: Georgian Byzantine-Rite Catholics are not recognized as a particular Church (cf. canon 27 of the Code of Canons of the Eastern Churches).