The Romanian Orthodox Church (Biserica Ortodoxă Română in Romanian) is an autocephalous Eastern Orthodox church. It is in full communion with other Eastern Orthodox churches, and is ranked seventh in order of precedence. The Primate of the church has the title of Patriarch. Its jurisdiction covers the territory of Romania, with dioceses for Romanians living in nearby Moldova, Serbia and Hungary, as well as diaspora communities in Central and Western Europe, North America and Oceania.

It is the only Eastern Orthodox church using a Romance language. The majority of people in Romania (18,817,975, or 86.8% of the population, according to the 2002 census data[3]) belong to it, as well as some 720,000 Moldovans.[2] The Romanian Orthodox Church is the second-largest in size behind the Russian Orthodox Church.

The Church in the Kingdom of Romania

In 1859, the Romanian principalities of Moldavia and Wallachia formed the modern state of Romania. The hierarchy of the Orthodox churches tends to follow the structure of the state. Therefore, shortly afterwards, in 1872, the Orthodox churches of the former principalities, the Metropolis of Ungro-Wallachia and the Metropolis of Moldavia, decided to unite to form the Romanian Orthodox Church.

The 1866 Constitution of Romania declared the Orthodox Church to be "independent of any foreign hierarchy", but it was a law passed in 1872 that declared the church to be "autocephalous". After a long period of negotiations with the Patriarchate of Constantinople, the latter finally recognized in 1885 the Metropolis of Romania, which was raised to the rank of Patriarchy in 1925.[4] 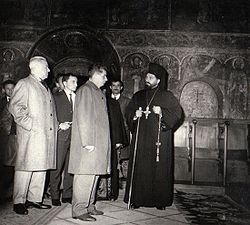 Nicolae Ceauşescu and other Party officials visit Neamţ Monastery in 1966.

Assessing the attitude of the Romanian Orthodox Church towards the Communist regime is difficult due to restricted access to ecclesiastical and relevant state archives.[5][6] Nevertheless, as an institution it was more or less tolerated by the atheist regime, though controlled through "special delegates" and excluded from the public space; the regime generally focused on individuals.[7] Its members' actions, both laity and clergy, range broadly from opposition to the regime and martyrdom, to survival, silent consent or collaboration. Not only the limited access to the Securitate and Party archives or the events' recentness, but the particularities of each individual and situation, the understanding each had about how their own relation with the regime could influence others and how it actually did, make such a task cumbersome.[8][9]

The Romanian Communist Party, which gained power at the end of 1947, initiated mass purges that decimated the Orthodox hierarchy. Three archbishops died suddenly after expressing opposition to government policies, and thirteen more "uncooperative" bishops and archbishops were arrested.[10] A May 1947 decree imposed a mandatory retirement age for clergy, allowing authorities to pension off old-guard holdouts. The 4 August 1948 Law on Cults institutionalised state control of episcopal elections and packed the Holy Synod with Communist supporters.[11] In exchange for subservience and enthusiastic support for state policies, as well as 2500 church buildings and other assets from the now-outlawed Romanian Greek-Catholic Church, the government provided salaries for bishops and priests, and financial subsidies for the publication of church books, calendars and theological journals.[12] By weeding out the anti-communists and setting up a pro-regime and secret police-infiltrated Union of Democratic Priests (1945), the party endeavoured to secure the hierarchy's cooperation. By January 1953 some 300-500 Orthodox priests were being held in concentration camps, and after Patriarch Nicodim's death in May 1948, the party succeeded in having the ostensibly docile Justinian Marina elected to succeed him.[10]

As a result of measures passed in 1947-48, the 2300 elementary schools operated by the church were closed, as were its 24 high schools, its academy of sacred music, three divinity schools, and 13 of its 15 theological seminaries. A new campaign struck the church in 1958-62 when more than half its remaining monasteries were closed, more than 2000 monks forced to take secular jobs, and about 1500 clergy and lay activists arrested (out of a total of up to 6000 in the 1946-64 period[12]). Throughout this period Patriarch Justinian was careful to say the right things and avoid giving offence to the government;[13] indeed the hierarchy claimed the arrests were not due religious persecution.[11]

The church's situation began to improve in 1962, when relations with the state suddenly thawed, an event that coincided with Romania's pursuit of an independent foreign policy course that saw the élite use nationalism to secure its position against Soviet pressure. The Romanian Orthodox Church, as an intensely national body which had made significant contributions to Romanian culture from the 14th century, was a natural partner. As a result of this second co-optation, now as an ally, the church was able to recover dramatically. Its diocesan clergy numbered about 12,000 in 1975, and by then it was already publishing eight high-quality theological reviews, including Ortodoxia and Studii Teologice. Orthodox clergymen consistently supported the Ceauşescu régime's foreign policy, refrained from criticism of domestic policy, and upheld the Romanian line against the Soviets (over Bessarabia) and the Hungarians (over Transylvania). As of 1989, two metropolitan bishops even sat in the Great National Assembly.[13] The church maintained its silence when some two dozen historic Bucharest churches were demolished in the 1980s, and when plans for systematization (including the destruction of village churches) were announced.[14] A notable dissenter was Gheorghe Calciu-Dumitreasa, imprisoned for a number of years and expelled from Romania in June 1985 after signing an open letter criticizing and demanding an end to the regime's violations of human rights.[12]

In order to fit its new circumstances, the Orthodox Church constructed a new ecclesiology to justify its subservience to the state in supposed theological terms. The "Social Apostolate" doctrine, developed by Patriarch Justinian, declared that the church owed its allegiance to the secular government and should be of service to that government. This notion inflamed conservatives, who were purged by Gheorghe Gheorghiu-Dej, Ceauşescu's predecessor and a friend of Justinian's. The Social Apostolate called on clerics to become active in the People's Republic, laying the foundation for the church's submission to and collaboration with the state. Fr. Vasilescu, an Orthodox priest, tried to ground the Social Apostolate in the Christian tradition, citing Augustine of Hippo, John Chrysostom, Maximus the Confessor, Origen and Tertullian. Based on this alleged tradition, Vasilescu concluded that Christians owed submission to their rulers because it was God's will. With recalcitrants removed from office, remaining bishops adopted a servile attitude, endorsing Ceauşescu's concept of nation, supporting his policies, and applauding his ideas about peace.[15]

Collaboration with the Securitate

After the 1989 Romanian Revolution, the Church never admitted of willingly collaborating with the régime, but several Romanian Orthodox priests have admitted publicly after 1989 that they have collaborated with and/or were informers for the Securitate, the Romanian Communist secret police. A prime example was Bishop Nicolae Corneanu, the Metropolitan of Banat, who admitted his efforts on the behalf of the Communist Party, and denounced clergy activity with the Communists, including his own, as "the Church's prostitution with the Communist régime".[11] 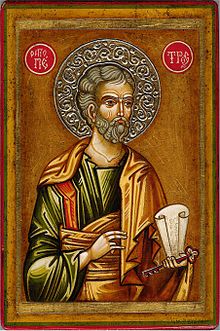 As Romania made the transition to a democracy, the Church was freed from state control, though the State Secretariat for Religious Denominations maintains control over a number of aspects of the church property, finances and administration. The state funds the church in proportion of religious adherents based on census returns[16] and "the religion's needs" which is considered to be an "ambiguous provision".[17] Currently, the state pays for the salaries of priests, deacons and prelates and the pensions of those who have retired, as well as expenses related to non-religious personal. This applies to all state-recognised religions.

The state also provides support for church construction and dilapidations with a preference towards the Orthodox parishes.[18] The state funds all the expenses of the Orthodox seminaries and colleges including teachers and professor salaries with compensation as civil servants.

Since the fall of Communism, Greek-Catholic Church leaders have claimed that the Eastern Catholic community is facing with a cultural and religious wipe-out: the Greek-Catholic churches are allegedly destroyed by the Orthodox Church representatives, whose actions are supported and accepted by the Romanian authorities. [19]

The Church in Moldova

This means that despite current political issues, the Metropolis of Bessarabia is now recognized as "the rightful successor" to the Metropolitan Church of Bessarabia and Hotin, which existed from 1927 to 1944, when it was dissolved, its canonical territory being put under the jurisdiction of the Russian Orthodox Church's Moscow Patriarchate in 1947.

See also: List of members of the Holy Synod of the Romanian Orthodox Church

There are six Metropolitanates and ten archbishoprics in Romania, and more than twelve thousand priests and deacons, servant fathers of ancient altars from parishes, monasteries and social centres. Almost 400 monasteries exist inside the country for some 3,500 monks and 5,000 nuns. Three Diasporan Metropolitanates and two Diasporan Bishoprics function outside Romania proper. As of 2004, there are, inside Romania, fifteen theological universities where more than ten thousand students (some of them from Bessarabia, Bukovina and Serbia benefiting from a few Romanian fellowships) currently study for a doctoral degree. More than 14,500 churches (traditionally named "lăcaşe de cult", or worshiping places) exist in Romania for the Romanian Orthodox believers. As of 2002, almost 1,000 of these were either in the process of being built or rebuilt.

Relations with other Orthodox jurisdictions 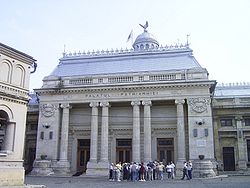 Most Eastern Orthodox autocephalous churches, including the Romanian, maintain a respectful spiritual link to the Ecumenical Patriarch, currently Bartholomew I.

In December 2007 Russian Duma United Russia’s MP Konstantin Zatulin accused the Romanian Orthodox Church of “proselytism” against the Russian Orthodox Church in Moldova (and Transnistria) with the aim of annexing these territories into Romania.[20]

Dumitru Stăniloae (1903 - 1993) is considered one of the greatest Orthodox theologians of the 20th century, having written extensively in all major fields of Eastern Christian systematic theology. One of his other major achievements in theology is the 45-year-long comprehensive series on Orthodox spirituality known as the Romanian Philocaly, a collection of texts written by classical Byzantine writers, that he edited and translated from Greek.

Archimandrite Ilie Cleopa (1912 - 1998), elder of the Sihastria Monastery, is considered one of the most representative spiritual fathers of contemporary Romanian Orthodox monastic spirituality.[21]

Main article: Patriarch of All Romania

Current leaders of the Church

The chair is currently held by Daniel I, Archbishop of Bucharest, Metropolitan of Ungro-Vlachia (Muntenia or Wallachia and Dobrogea or Dobruja) and Patriarch of All of the Romanian Orthodox Church, Locum Tenens of Caesarea in Cappadocia.