Charity (virtue)
This article is about the theological term of Christianity. For other uses, see Charity (disambiguation). 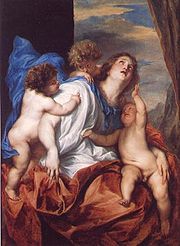 In Christian theology charity, or love (agapē), means an unlimited loving-kindness toward all others.

The term should not be confused with the more restricted modern use of the word charity to mean benevolent giving.

In Christian theology charity, or love (agapē), is the greatest of the three theological virtues:

Love, in this sense of an unlimited loving-kindness towards all others, as is referred to as Universal Love, is held to be the ultimate perfection of the human spirit, because it is said to both glorify and reflect the nature of God. In its most extreme form such love can be self-sacrificial. To include it under the same category as the virtue of Charity may be misguided as it stands alone as the greatest virtue of all. Confusion can arise from the multiple meanings of the English word "love." The love that is caritas is distinguished by its origin, being Divinely infused into the soul, and by its residing in the will rather than emotions, regardless of what emotions it stirs up. This love is necessary for salvation, and with it no one can be lost. 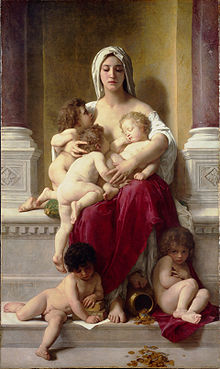 Charity has two parts: love of God and love of man, which includes both love of one's neighbor and one's self.

Paul describes it in the First Letter to the Corinthians, chapter 13 (KJV):

Charity suffereth long, and is kind; charity envieth not; charity vaunteth not itself, is not puffed up, Doth not behave itself unseemly, seeketh not her own, is not easily provoked, thinketh no evil; Rejoiceth not in iniquity, but rejoiceth in the truth; Beareth all things, believeth all things, hopeth all things, endureth all things.

When I was a child, I spoke as a child, I understood as a child, I thought as a child: but when I became a man, I put away childish things. For now we see through a glass, darkly; but then face to face: now I know in part; but then shall I know even as also I am known.

And now abideth faith, hope, charity, these three; but the greatest of these is charity.

Note that the King James Version uses both the words charity and love to translate the idea of caritas / ἀγάπη: sometimes it uses one, then sometimes the other, for the same concept. Most other English translations, both before and since, do not; instead throughout they use the same more direct English word love, so that the unity of the teaching should not be in doubt. Love can have other meanings in English, but as used in the New Testament it almost always refers to the virtue of caritas.

Many times when charity is mentioned in English-language bibles, it refers to "love of God." One example is "charity covereth a multitude of sins" (Peter 4:8), which forms the basis of perfect contrition.