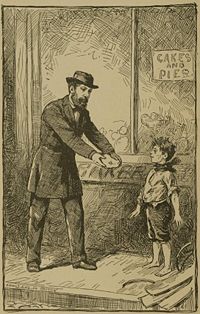 The practice of charity means the voluntary giving of help to those in need who are not related to the giver.

The word "charity" entered the English language through the Old French word "charité" which was derived from the Latin "caritas".[1]

Originally in Latin the word caritas meant preciousness, dearness, high price. From this, in Christian theology, caritas became the standard Latin translation for the Greek word agapē, meaning an unlimited loving-kindness to all others, such as the love of God. This much wider concept is the meaning of the word charity in the Christian triplet "faith, hope and charity", as used by the Douay-Rheims and the King James Version of the Bible in their translation of St Paul's Letter to the Corinthians. However the English word more generally used for this concept, both before and since (and by the "King James" Bible at other passages), is the more direct love. (See the article Charity (virtue))

St Paul's agapē was not primarily about good works and giving to the poor[dubious – discuss] (And though I feed the poor with all my goods, and though I give my body, that I be burned, and have not love [agapē], it profiteth me nothing - 1 Cor 13:3, Geneva translation, 1560), although in English the word "charity" has steadily acquired this as its primary meaning, wherein it was first used in Old French at least since the year 1200 A.D.. 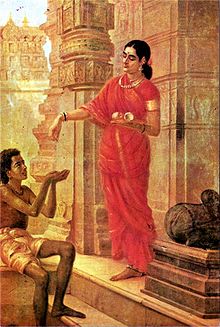 Charitable giving is the act of giving money, goods or time to the unfortunate, either directly or by means of a charitable trust or other worthy cause. Charitable giving as a religious act or duty is referred to as almsgiving or alms. The name stems from the most obvious expression of the virtue of charity is giving the objects of it the means they need to survive.

The poor, particularly widows and orphans, and the sick and disabled, are generally regarded as the proper objects of charity. Some groups regard charity as being properly directed toward other members of their group. Although giving to those nearly connected to oneself is sometimes called charity—as in the saying "Charity begins at home" -- normally charity denotes giving to those not related, with filial piety and like terms for supporting one's family and friends. Indeed, treating those related to the giver as if they were strangers in need of charity has led to the figure of speech "as cold as charity" -- providing for one's relatives as if they were strangers, without affection.

Most forms of charity are concerned with providing food, water, clothing, and shelter, and tending the ill, but other actions may be performed as charity: visiting the imprisoned or the homebound, dowries for poor women, ransoming captives, educating orphans. Donations to causes that benefit the unfortunate indirectly, such as donations to fund cancer research, are also charity. 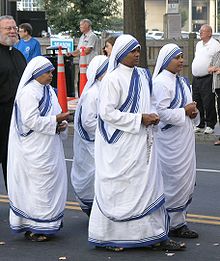 Missionaries of Charity, a Roman Catholic order dedicated to caring for the poor

The recipient of charity may offer to pray for the benefactor; indeed, in medieval Europe, it was customary to feast the poor at the funeral in return for their prayers for the deceased. Institutions may commemorate benefactors by displaying their names, up to naming buildings or even the institution itself after the benefactors. If the recipient makes material return of more than a token value, the transaction is normally not called charity.

Originally charity entailed the benefactor directly giving the goods to the receiver. This practice is still continued by some individuals, for example, CNN Hero Sal Dimiceli, and service organizations, such as the Jaycees, who seek out the needy. But people who can not support themselves and lack the means of support sometimes beggars, directly soliciting aid from strangers encountered in public.

Institutions evolved to carry out the labor of assisting the poor, and these institutions, called charities, provide the bulk of charitable giving today, in terms of monetary value. These include orphanages, food banks, religious orders dedicated to care of the poor, hospitals, organizations that visit the homebound and imprisoned, and many others. Such institutions allow those whose time or inclination does not lend themselves to directly care for the poor to enable others to do so, both by providing money for the work and supporting them while they do the work. Institutions can also attempt to more effectively sort out the actually needy from those who fraudulently claim charity. Early Christians particularly recommended the care of the unfortunate to the charge of the local bishop. Today some charities have modernized, and allow people to donate online, through websites such as Xperedon or Just Giving.

In Islam this is called Zakat, and is one of the five pillars upon which the Muslim religion is based.

There have been examinations of who gives more to charity. One study conducted in the United States found that as a percentage of income, charitable giving increased as income decreased. The poorest fifth of Americans, for example, gave away 4.3% of their income, while the wealthiest fifth gave away 2.1%. In absolute terms, this was an average of $453 on an average income of $10,531, compared to $3,326 on an income of $158,388.[2]