Christianity in the 10th century

Christianity in the 10th century

With the division and decline of the Carolingian Empire, notable theological activity was preserved in some of the Cathedral schools that had begun to rise to prominence under it – for instance at Auxerre in the 9th century or Chartres in the 11th. Intellectual influences from the Arabic world (including works of classical authors preserved by Islamic scholars) percolated into the Christian West via Spain, influencing such theologians as Gerbert of Aurillac, who went on to become Pope Sylvester II and mentor to Otto III. (Otto was the fourth ruler of the Germanic Ottonian Holy Roman Empire, successor to the Carolingian Empire). With hindsight, one might say that a new note was struck when a controversy about the meaning of the eucharist blew up around Berengar of Tours in the 11th century: hints of a new confidence in the intellectual investigation of the faith that perhaps foreshadowed the explosion of theological argument that was to take place in the 12th century.

The Iberian peninsula under the Umayyads and the Berber dynasties

By the end of the 10th century, the ruler Abd al-Rahman III took over the title of Emir of Córdoba(912-961).[2] Soon after, the Umayyads went on developing a strengthened state with its capital as Córdoba. Al-Hakam II succeeded to the Caliphate after the death of his father Abd ar-Rahman III in 961. He secured peace with the Christian kingdoms of northern Iberia,[3] and made use of the stability to develop agriculture through the construction of irrigation works.[4] Economical development was also encouraged through the widening of streets and the building of markets. The rule of the Caliphate is known as the heyday of Muslim presence in the peninsula.[5] 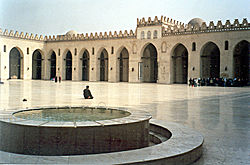 Aghlabid rule was short lived, as they were deposed by the Shiite Fatimid dynasty in 909. By around 960, the Fatimids had conquered Abbasid Egypt, building a new capital there in 973 called "al-Qahirah" (meaning "the planet of victory", known today as Cairo). Similar was the case in Persia, where the Turkic Ghaznavids managed to snatch power from the Abbasids.[6][7]

The Fatimids had their origins in Ifriqiya (modern-day Tunisia and eastern Algeria). The dynasty was founded in 909 by ʻAbdullāh al-Mahdī Billah, who legitimised his claim through descent from Muhammadby way of his daughter Fātima as-Zahra and her husband ʻAlī ibn-Abī-Tālib, the first Shīʻa Imām, hence the name al-Fātimiyyūn "Fatimid".

Abdullāh al-Mahdi's control soon extended over all of central Maghreb, an area consisting of the modern countries of Morocco, Algeria, Tunisia and Libya, which he ruled from Mahdia, his newly-built capital in Tunisia.

The Fatimids entered Egypt in the late 10th century, conquering the Ikhshidid dynasty and founding a new capital at al-Qāhira(Cairo) in 969.[8] The name was a reference to the planet Mars, "The Subduer", which was prominent in the sky at the moment that city construction started. Cairo was intended as a royal enclosure for the Fatimid caliph and his army, though the actual administrative and economic capital of Egypt was in cities such as Fustat until 1169. After Egypt, the Fatimids continued to conquer the surrounding areas until they ruled from Tunisia to Syria and even crossed over into Sicily and southern Italy. 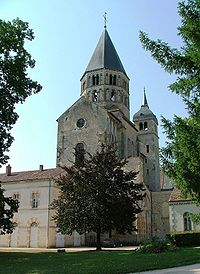 A view of the Abbey of Cluny.

From the 6th century onward most of the monasteries in the West were of the Benedictine Order. Owing to the stricter adherence to a reformed Benedictine rule, the abbey of Cluny became the acknowledged leader of western monasticism from the later 10th century. A sequence of highly competent abbots of Cluny were statesmen on an international level. The monastery of Cluny itself became the grandest, most prestigious and best endowed monastic institution in Europe. Cluny created a large, federated order in which the administrators of subsidiary houses served as deputies of the abbot of Cluny and answered to him. Free of lay and episcopal interference, responsible only to the papacy, the Cluniac spirit was a revitalising influence on the Norman church. The height of Cluniac influence was from the second half of the 10th century through the early 12th.

The Cluniac reform of monasteries that began in 910 placed abbots under the direct control of the pope rather than the secular control of feudal lords, thus eliminating a major source of corruption. This sparked a great monastic renewal.[9] Monasteries, convents and cathedrals still operated virtually all schools and libraries, and often functioned as credit establishments promoting economic growth.[10][11] After 1100, some older cathedral schools split into lower grammar schools and higher schools for advanced learning. First in Bologna, then at Paris and Oxford, many of these higher schools developed into universities and became the direct ancestors of modern Western institutions of learning.[12] It was here where notable theologians worked to explain the connection between human experience and faith.[13] 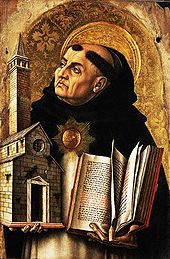 Saint Thomas Aquinas carrying the whole Church with his theology

The most notable of these theologians, Thomas Aquinas, produced Summa Theologica, a key intellectual achievement in its synthesis of Aristotelian thought and the Gospel.[13] Monastic contributions to western society included the teaching of metallurgy, the introduction of new crops, the invention of musical notation and the creation and preservation of literature.[12] 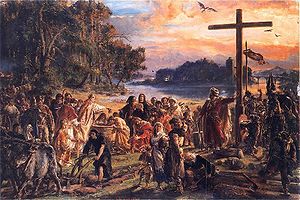 The "Baptism of Poland" (Polish: Chrzest Polski) in 966 refers to the baptism of Mieszko I, the first ruler of a united Polish state. His baptism was followed by the building of churches and the establishment of an ecclesiastical hierarchy. Mieszko saw baptism as a way of strengthening his hold on power, with the active support he could expect from the bishops, as well as a unifying force for the Polish people. Mieszko's action proved highly successful; by the 13th century, Roman Catholicism had become the dominant religion in Poland.

In the Middle Ages, the Kingdom of Hungary (which was larger than modern day Hungary) was Christianized between 970 and 1038.

The traditional event associated with the conversion of Russia is the baptism of Vladimir of Kiev in 989, on which occasion he was also married to the Byzantine princess Anna, the sister of the Byzantine Emperor Basil II. However, Christianity is documented to have predated this event in the city of Kiev and in Georgia.

The success of the conversion of the Bulgarians facilitated the conversion of other East Slavic peoples, most notably the Rus', predecessors of Belarusians, Russians, and Ukrainians. By the beginning of the 11th century most of the Slavic world, including, Bulgaria, Serbia, and Russia had converted to Eastern Orthodox Christianity.

Bulgaria's Church was officially recognized as a Patriarchate by Constantinople in 927, Serbia's in 1346, and Russia's in 1589. All these nations, however, had been converted long before these dates.

The traditional event associated with the conversion of Russia is the baptism of Vladimir of Kiev in 989, on which occasion he was also married to the Byzantine princess Anna, the sister of the Byzantine Emperor Basil II. However, the presence of Christianity in these areas is documented to have predated this event.

Between the 8th and the 13th century the area of what now is Belarus, Russia and the Ukraine was settled by the Kievan Rus'. An attempt to Christianize them had already been made in the 9th century, with the Christianization of the Rus' Khaganate. The efforts were finally successful in the 10th century, when about 980 Vladimir the Great was baptized at Chersonesos.

by AD 1100, Germanic paganism had also ceased to have political influence in Scandinavia.