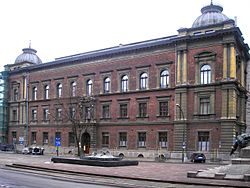 Kraków Academy of Fine Arts named after Matejko in 1979, where he served as president of many years

Polish pronunciation (help·info)) (also known as Jan Mateyko; June 24, 1838 – November 1, 1893) was a Polish painter known for paintings of notable historical Polish political and military events.[1][2] His most famous works include oil on canvas paintings like Battle of Grunwald, paintings of numerous other battles and court scenes, and a gallery of Polish kings. He is counted among the most famous Polish painters.[1][2]

Matejko born on June 24, 1838 in the Free City of Kraków.[1] His father, Franciszek Ksawery Matejko (Czech: František Xaver Matějka) (b. 1789 or 13 January 1793, d. 26 October 1860), a Czech from the village of Roudnice, was a graduate of the Hradec Králové school; who later became a tutor and music teacher.[1] He first worked for the Wodzicki family in Kościelniki, Poland, then moved to Kraków, where he married the half-German, half-Polish Joanna Karolina Rossberg.[1] Jan was the ninth child from eleven that his parents had. After the death of his mother in 1846, Jan and his siblings were taken care of by his aunt, Anna Zamojska.

From his earliest days Matejko showed exceptional artistic talent that allowed him to advance from grade to grade, although he had great difficulty with other subjects. He never mastered a foreign language and did not do well even with his native Polish language. As a result, the public appearances he was obliged to make all his life must have been difficult for him.

At a young age he witnessed the Kraków revolution of 1846 and the 1848 siege of Kraków by the Austrians, the two events which ended the existence of the Free City of Kraków.[1] His two older brothers served in them under General Józef Bem, one died and the other was forced into exile.[1]

He attended St. Ann's High School, which he dropped out of in 1851 because of poor results. Despite that and because of his exceptional talent he studied at the School of Fine Arts in Kraków from 1852 to 1858.[1] His teachers included Wojciech Korneli Stattler and Władysław Łuszczkiewicz. During this time, he began exhibiting historical paintings at the Society of Friends of the Fine Arts there (see e.g. Sigismund I Bestowing Nobility on the Professors of the University of Kraków in 1535.). After studying under the historical painter Hermann Anschütz in Munich (1859) and then briefly and less successfully in Vienna, Matejko returned to Kraków. It would be however years before he would gain commercial success; for a time he was the proverbial "starving artist", who celebrated when he sold a canvass (Tsars Szujscy) for five gulden.[1]

During the January Uprising of 1863 in which he did not participate because of poor health, Matejko gave financial support and transported arms to the insurgents' camp in Goszcza). In 1864 he married Teodora Giebultowska, with whom he had four children: Beata, Helena, Tadeusz, and Jerzy. In the same year he became a member of Scientific Society in Kraków. Tadeusz, his first son, was a painter who studied under his father's supervision.[3] Helena, his daughter, also an artist, was a patriot who helped victims in World War I and was awarded the Cross of Independence by president Stanisław Wojciechowski.[4]

At that time Matejko started to gain international recognition; literally a starving artist during his younger days. In 1865 Matejko's painting "Skarga's Sermon" was awarded a gold medal at the yearly Paris salon; soon afterwards Count Maurycy Potocki bought it for 10,000 guldens.[1] In 1868, his painting "Rejtan" was awarded a gold medal at the World Exhibition in Paris. Critics listed Matejko as one of the most important European historical painters.[1] From the Polish perspective, he succeeded in propagating the Polish history, and reminding the world about Poland, which while partitioned and without any independent political representation, still commanded the hearts of many.[1]

Beginning in 1873, he was for many years the principal of the Academy of Fine Arts.

Matejko died in Kraków on November 1, 1893. He was buried in the center of the Alley of the Meritorious at Kraków's Rakowicki Cemetery. 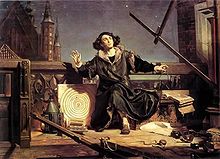 Copernicus, in Conversation with God, (1872)

In 1860 Matejko issued an illustrated album, Ubiory w Polsce (Clothing in Poland), a project reflecting his intense interest in historical records of all kinds and his desire to promote such interest among the Polish people in an effort to intensify their patriotic feelings. In 1861 he had an exhibition Otrucie królowej Bony (Poisoning of Queen Bona) in Warsaw's Zachęta. The national defeats forced him to abandon the Christian religious painting which, he believed, was his vocation and to devote himself almost exclusively to historical painting. In fact he created a vision of Polish history from which we can not liberate ourselves despite of perennial criticism of the scientists. Matejko often placed on his paintings people who were not present at this location (f.ex. Hugo Kołłątaj, and General Józef Wodzicki, on The Battle of Racławice). He was not interested in presenting factual events but in representation of a historical-philosophical synthesis. Matejko's work has to be viewed not only in artistic terms, but also in terms of the social function it performed and continues to perform today. He considered history as a function of the present and the future. His paintings are not historical illustrations, rather they are powerful expressions of the artist's psyche and his attitude to the world. 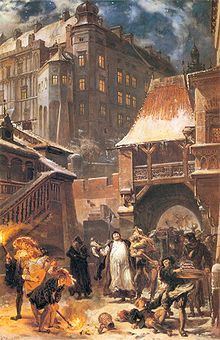 Matejko was focusing on major themes in Polish history and using historical sources to paint events in minute historical detail. He created two groups of historical paintings. The earlier one starting with the painting Stańczyk (1862) was directed against the magnates whose lack of patriotism caused, in his opinion, the fall of Poland. Stanczyk, the court jester to King Sigismund I (1437–1548), to whom Matejko gave his own features. The jester is presented as a symbol of the nation's conscience: he sits glumly in a chair apart from the other figures, alone in seeing that events during the wars against Moscow would ultimately end in tragedy. This group of paintings included among others also Kazanie Skargi (Sermon of Piotr Skarga) (1864) and Reytan (1866).

The second group, painted after the defeat of January Uprising, is dedicated to famous events in Polish history. Matejko depicted many major events and battles in Polish history. His most famous work is Bitwa pod Grunwaldem (Battle of Grunwald) (1878) depicting the 1410 Polish and Lithuanian victory over the Teutonic Knights; a painting showing "clearly nationalist endeavour"[5] which garnered it international acclaim as "an unrivaled icon of Polish nationalism".[6] Other paintings in this group include Unia Lubelska (Union of Lublin) (1869), Stefan Batory pod Pskowem (Stefan Batory at the siege of Pskov) (1872), Kopernik (Nicolaus Copernicus), Dzwon Zygmunta (Sigismund's Bell) (1874), Hołd Pruski (Prussian Tribute) (1882), Sobieski pod Wiedniem (Jan III Sobieski at the Battle of Vienna) (1883), Wernyhora, Kościuszko pod Racławicami (Tadeusz Kościuszko at the battle of Racławice) (1888), Dzieje Cywilizacji w Polsce (History of civilization in Poland) (1889) and Konstytucja 3 Maja (Constitution of the 3 May) (1891). From 1890 to 1892 he also painted all of the Polish kings compiled in his book Portraits of Polish Kings (1890); his dedication to detail is evident in that he attended the opening of Queen Jadwiga's sarcophagus in 1887 to make sketches of her skull.

In addition to historical events Matejko made also several portraits. Among others: Żona w sukni ślubnej ("Wife in the wedding dress") (1879), A. Potocki (1879), S. Tarnowski (1890), Autoportret (1892). Altogether Matejko authored 320 oil paintings and several thousands drawings and watercolors. Finally he painted a monumental polychrome in St. Mary's Basilica, Kraków (1889–1891). His most important paintings were hidden during World War II (Bitwa pod Grunwaldem was buried in Lublin). After 1945 majority of his works was found and subject to restoration. They are now mainly in Warsaw's National Museum (Muzeum Narodowe w Warszawie). His works, disseminated in thousands of reproductions, have made him one of the most famous painters in Poland, and became almost standard illustrations of many key events in Polish history.

His favorite dish was dumplings with plums.

Below is the list of Matejko's most famous works, in a chronological order.