Maghreb
This article is about the region. For the Muslim prayer, see Maghrib. For other uses, see Maghrib (disambiguation). 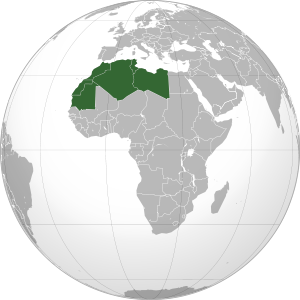 The Maghreb (also Maghrib; Arabic مغرب) is the region of Northwest Africa, west of Egypt. It includes five countries: Morocco, Algeria, Tunisia, Libya, and Mauritania and the disputed territory of Western Sahara. During Al-Andalus, its inhabitants, Maghrebis, were known as Moors.[1]

Historical terms for the region are Barbary (in the early modern era) and Libya or Africa in classical antiquity. The Berber term is Tamazgha. The term maghrib is in origin an Arabic word for "west, occident", denoting the westernmost territories that fell to the Islamic conquests of the 7th century.[2] Today, it is used as a proper noun denoting the Maghreb, also known as المغرب العربي al-maghrib al-`arabī "the Arab west" in Arabic. The definite form al-maghrib is used for the country of Morocco in particular.

Before the establishment of modern nation states in the region in the 20th century, Maghreb referred to a smaller area between the Atlas Mountains range in the south and the Mediterranean Sea, eastern Libya, but not modern Mauritania. As recently as late 19th century it was used to refer to Western Mediterranean region in general, and Algeria, Morocco and Tunisia in particular.[3]

The region was somewhat unified as an independent political entity during the rule of the Berber kingdom of Numidia, and later in the Islamic caliphates under Umayyad, Almoravid and Almohad rule, during the 8th to 13th centuries.

The five modern states of North Africa established the Maghreb Union in 1989 to promote cooperation and economic integration in a common market. It was envisioned initially by Muammar Gaddafi as an Arab superstate, ignoring the Berber identity of many North Africans. The union included Western Sahara implicitly under Morocco's membership,[4] putting Morocco's long cold war with Algeria to a rest. However, this progress was short-lived, and the union is now frozen. Tensions between Algeria and Morocco over Western Sahara re-emerged strongly, reinforced by the unsolved borderline issue between the two countries. These two main conflicts have hindered progress on the union's joint goals and practically made it inactive as a whole.[5]

The popular Berber language alternative term for al-maghrib, popularized by Berber activists in the last quarter of the 20th century is Tamazgha.[6]

The Great Mosque of Kairouan, founded by the Arab general Uqba Ibn Nafi (in 670), is the oldest mosque in the Maghreb;[7] city of Kairouan, Tunisia.

After the end of the Ice Age about ten thousand years ago, when the Sahara dried up, contact between the Maghreb and sub-Saharan Africa was extremely limited.

Many ports along the Maghreb coast were occupied by Phoenicians, particularly Carthaginians. With the defeat of Carthage, Rome took over many of these ports, and ultimately it took control of the entire Maghreb north of the Atlas Mountains. Remaining outside its control were only some of the most mountainous regions like the Moroccan Rif.

The Arabs reached the Maghreb in early Umayyad times. Arab expansion and the spread of Islam pushed the development of trans-Saharan trade. While restricted due to the cost and dangers, the trade was highly profitable. Peoples traded in such goods as salt, gold, ivory, and slaves taken from the Sahel regions as well as southern Europeans enslaved by Muslim pirates. Arab control over the Maghreb was quite weak. Various Islamic groups, such as the Ibadis and the Shia, adopted by some Berbers, quickly threw off Caliphal control in favour of their interpretation of Islam.

The Arabic language became widespread only later, as a result of the invasion of the Banu Hilal, unleashed by the Fatimids in punishment for their Zirid clients' defection in the 12th century. Throughout this period, the Maghreb most often was divided into three states roughly corresponding to modern Morocco, western Algeria, and eastern Algeria and Tunisia. The region was occasionally briefly unified, as under the Almohads, and briefly under the Hafsids. 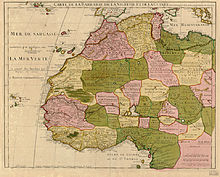 1707 map of northwest Africa by Guillaume Delisle, including the Maghreb

After the Middle Ages, the Ottoman Empire loosely controlled the area east of Morocco.

After the 19th century, areas of the Maghreb were colonized by France, Spain and later Italy.

Today more than two and a half million Maghrebi immigrants live in France, especially from Algeria and Morocco. In addition, there are 3 million French of Maghrebi origin (in 1999) (with at least one grand-parent from Algeria, Morocco or Tunisia).[8] Another estimation gives a number of six million.[9] 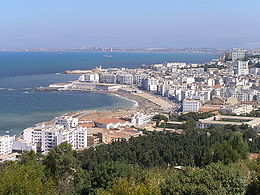 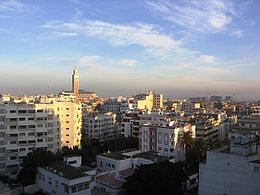 Maghreb is home to 1 per cent of the global population as of 2010. Maghrebi people include Moroccans (along with Sahrawis), Algerians, Libyans, Mauritanians, and Tunisians.[10] Maghrebis are largely composed of Berber and Arab descent with European and Sub-Saharan elements.

Various other influences are also prominent throughout the Maghreb. In northern coastal towns, in particular, several waves of European immigrants influenced the population in the Medieval era. Most notable were the moriscos and muladies, that is, theindigenous Spaniards who had earlier converted to the Muslim faith and were fleeing, together with ethnic Arab and Berber Muslims, from the Spanish Catholic Reconquista. Other European contributions included French, Italians, and others captured by the corsairs.[11]

Historically the Maghreb was home to significant Jewish communities called Maghrebim who predated the 7th century introduction and conversion of the region to Islam. These were later augmented by Spanish Sephardic Jews who, fleeing the Spanish Catholic Inquisition, established a presence in North Africa, chiefly in the urban trading centers. They have contributed to the wider population through conversion and assimilation.

Another significant group are Turks who came over with the expansion of the Ottoman Empire. A large Turkish descended population exists, particularly in Tunisia and Algeria.

Sub-Saharan Africans joined the population mix during centuries of trans-Saharan trade. Traders and slaves went to the Maghreb from the Sahel region. On the Saharan southern edge of the Maghreb are small communities of black populations, sometimes called Haratine, who are apparently descended from black populations who inhabited the Sahara during its last wet period and then migrated north.

In Algeria especially, a large European minority, the "pied noirs", immigrated and settled under French colonial rule in late 19th century. The overwhelming majority of these, however, left Algeria during and following the war for independence.[12]

The Maghreb shares a common culinary tradition. Habib Bourguiba defined it as the part of the Arab World where couscous is the staple food, as opposed to Eastern Arab countries where white rice is the staple food. In terms of food, similarities beyond the starches are found throughout the Arab world. 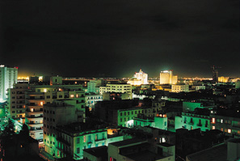 The original religions of the Northern African peoples of the area seem [5] to have been based and related with fertility cults of a strong Matriarchy pantheon, given the social and linguistic structures of the Amazigh cultures antedating all Egyptian and eastern, Asian, northern Mediterranean, and European influences.[13]

Historic records of religion in the Maghreb region show its gradual inclusion in the Classical World, with coastal colonies established first by Phoenicians, some Greeks, and later extensive conquest and colonization by the Romans. By the 2nd century common era, the area had become a center of Phoenician-speaking Christianity,where bishops spoke and wrote in Punic,and even Emperor Septimius Severus was noted by his local accent. Both Roman settlers and Romanized populations converted to Christianity. The region produced figures such as Christian Church writer Tertullian (c. 155 – c. 202); and Christian Church martyrs or leading figures such as Perpetua and Felicity (martyrs, c. 200 CE);St Cyprian of Carthage (+ 258); St. Monica; her son the philosopher St. Augustine, Bishop of Hippo I (+ 430) (1); and St Julia of Carthage (5th century.)

The domination of Christianity ended when Arab invasions brought Islam in 647. Carthage fell in 698 and the remainder of the region followed in subsequent decades. Gradual Islamization proceeded, although surviving letters showed correspondence from regional Christians to Rome up until the 9th century. Christianity was still a living faith. Christian bishoprics and dioceses continued to be active, with relations continuing with Rome. As late as Pope Benedict VII (974-983) reign, a new Archbishop of Carthage was consecrated. Evidence of Christianity in the region then faded through the 10th century.[citation needed]

During the 7th century, the region's peoples began their nearly total conversion to Islam. There is a small but thriving Jewish community, as well as a small Christian community. Most Muslims follow the Sunni Maliki school. Small Ibadi communities remain in some areas. A strong tradition of venerating marabouts and saints' tombs is found throughout regions inhabited by Berbers. Any map of the region demonstrates the tradition by the proliferation of "Sidi"s, showing places named after the marabouts. Like some other religious traditions, this has substantially decreased over the 20th century. A network of zaouias traditionally helped proliferate basic literacy and knowledge of Islam in rural regions.

In the 10th century, as the social and political environment in Baghdad became increasingly hostile to Jews, many Jewish traders emigrated to the Maghreb, especially Morocco. Over the following two or three centuries, such Jewish traders became known as the Maghribis, a distinctive social group who traveled throughout the Mediterranean World. They passed this identification on from father to son. Their tight-knit pan-Maghreb community had the ability to use social sanctions as a credible alternative to legal recourse, which was anyway weak at the time. This unique institutional alternative permitted the Maghribis to very successfully participate in Mediterranean trade.[14]

The Maghreb is divided into a Mediterranean climate region in the north, and the arid Sahara in the south. The Magreb's variations in elevation, rainfall, temperature, and soils give rise to distinct communities of plants and animals. The World Wide Fund for Nature (WWF) identifies several distinct ecoregions in the Maghreb.

The portions of the Maghreb between the Atlas Mountains and the Mediterranean Sea, along with coastal Tripolitania and Cyrenaica in Libya, are home to Mediterranean forests, woodlands, and scrub. These ecoregions share many species of plants and animals with other portions of Mediterranean Basin. The southern extent of the Mediterranean Maghreb corresponds with the 100 mm isohyet, or the southern range of the European Olive (Olea europea)[15] and Esparto Grass (Stipa tenacissima).[16]

The Sahara extends across northern Africa from the Atlantic Ocean to the Red Sea. Its central part is hyper-arid and supports little plant or animal life, but the northern portion of the desert receives occasional winter rains, while the strip along the Atlantic coast receives moisture from marine fog, which nourishes a greater variety of plants and animals. The northern edge of the Sahara corresponds to the 100 mm isohyet, which is also the northern range of the date palm (Phoenix dactylifera).[16]

Genetics of the Maghreb population

The Y-chromosome genetic structure of the Maghreb population seems to be mainly modulated by geography, The Y-DNA Haplogroups E3b and J, which are so common among the population of North African and the Middle East, Haplogroups E3b and J, are the most widespread among North African groups especially E1b1b1b (E-M81, formerly E3b1b) which is typical of the indigenous Berbers of North-West Africa. In some parts of Morocco E1b1b1b can peak at 80% of the population. Followed by Haplogroup J especially J1[21] [6] , which is typically Middle Eastern it can reach a frequencies of 35% in the region,[22][23] and its highest density is founded in the Arabian Peninsula,[23] Followed by Haplogroup R1[24] which has been observed in North African though with lower frequency. The Y-DNA Haplogroups shown above are observed in both Arab and Berber-speakers.

The Northwest-African Y chromosome pool (including both Arab and Berber populations) may be summarized as follows where only two haplogroups E1b1b and J comprise generally more than 80% of the total chromosomes:[25][26][27][28][29][30][31]