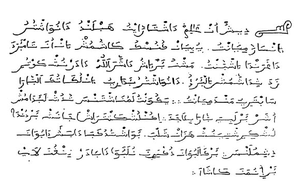 The Spanish and Portuguese word muladi is derived from Arabic muwallad. The basic meaning of muwallad is a person of mixed ancestry, especially a descendant of an Arab and a non-Arab parent, who grew up among Arabs and was educated within the Islamic culture.

According to Dozy, Muwallad means "anyone who, without being of Arab origin, is born among the Arabs and has been raised as an Arab".[2] The word, according to him, does not necessarily imply Arab ancestry, either paternal or maternal.

According to the dictionnary of the Real Academia Española, Muladi means "Christian Spaniard who, during the Arab domination in Spain, embraced Islam and lived among the Muslims." http://buscon.rae.es/draeI/SrvltConsulta?TIPO_BUS=3&LEMA=muladi

According to Bernards and Nawas, the plural form of the word seems to be restricted to al-Andalus, almost exclusively to the areas of Mérida, Granada, Seville and Jaén.[3]

"Muladi" has been offered as one of the possible etymological origins of the still-current Spanish and Portuguese term Mulatto, denoting a person of white and black ancestry. In the Basque language, the word mairuak (builders of semi-circular Arches) referred to Muladi merchants and travelers who built Mosques in the rural regions of Iberia.

Muladi art from Toledo in Al-Andalus depicting the Alcázar in the year 976.AD

In Islamic history muwalladun designates in a broader sense non-Arab neo-Muslims or the descendants of converts. In the Muslim-ruled parts of the Iberian Peninsula, parts of the indigenous until-then Christian population (basically a mixture of the pre-Roman peoples of the Iberian Peninsula, ancient Romans, Visigoths and Suebi) converted to Islam in the 8th and 9th centuries. In the 10th century a massive conversion of Christians took place, so that muladies comprised the majority of the population of Al-Andalus by the century's end. However, the majority of Muwallads had embraced Islam early, but retained many pre-Islamic customs and characteristics.

Conversion to Islam was encouraged by the Ummayad caliphs and Emirs of Córdoba but it was not forced. Many Christians converted to Islam to avoid the Jizya tax which they were subjected to as Dhimmis.[4] Conversion to Islam also opened up new horizons to the native Christians, alleviated their social position, ensured better living conditions, and broadened scope for more technically skilled and advanced work.[5]

The Christians who embraced Islam became Mawali or Clients attached to an Arab tribe and as such, were thoroughly Arabized, adopting the Arab dress code, customs, and language.[6]

Through the cultural Arabization of muladies and their increasing inter-marriage with some Berbers and Arabs present in Iberia, the distinctions between the different Muslim groups became increasingly blurred in the 11th and 12th centuries. The populations mixed with such rapidity that it was soon impossible to distinguish ethnically the elements of foreign origin from the natives. Therefore, they merged into a more homogeneous group of Andalusi Arabs generally also called Moors.[6] 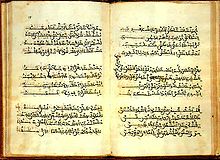 In the process of acculturation, Muwallads may well have adopted an agnatic model of descent, but without abandoning the bilaterality of late Roman kinship. According to Abu Jafar ibn Harun of Trujillo vast but silent majority of Muladi Muslims thrived especially in the Extremadura region of Spain.[6]

Among the Muwalladun were the free-born, enfranchised and slaves. A significant part of the Muwalladun was formed by freed slaves. These were the Saqaliba, or Slavs who became a very important social group in Al-Andalus during the 10th and 11th centuries. Upon adopting the ethnic name of their patrons, the emancipated slaves gradually forgot all about their own ethnic origin.[6] The Slavic Muslim slaves, saqaliba led by Muyahid ibn Yusuf ibn Ali their leader, who could take profit from the progressive crumbling of the Umayyad Caliphate's superstructure to gain control over the province of Denia. The Saqaliba managed to free themselves and run the Taifa which extended its reach as far as the islands of Majorca and its capitol Medina Mayurqa.

The intermarriage of foreign Muslims with native Christians made many Muwallads mindless of their Iberian origin. As a result, their descendants and many descendants of Christian converts forgot the descent of their ancestors and assumed forged Arab genealogies.[6] However, there were a few who were proud of their Roman and Visigothic origins. These included the Banu Angelino and Banu Sabarico of Seville, Banu Qasi of Aragon, Banu l' Longo and Banu Qabturno. Several Muwallad nobles also used the name Al-Quti (The Goth), and some may have been actual descendants from the family of the Visigothic King of Hispania, Wittiza.[6]

The conversion of the native Christians to Islam did not mean the total erasure of previous beliefs and social practises. There is some evidence of a limited cultural borrowing from the Christians by the Muwalladun and other Muslims in Al-Andalus. For instance, the Muslims adoption of the Christian solar calendar and holidays was an exclusively Andalusi phenomenon. In Al-Andalus, the Islamic lunar calendar was supplemented by the local solar calendar, which were more useful for agricultural and navigational purposes. Like the local Mozarabs (Iberian Christians under Muslim rule in the Al-Andalus that remained unconverted to Islam), the Muslims of Al-Andalus were notoriously heavy drinkers. The Muslims also celebrated traditional Christian holidays sometimes with the sponsorship of their leaders, despite the fact that such fraternisation was generally opposed by the Ulema. The Muslims also hedged their metaphysical bets through the use of Roman Catholic sacraments.[7]

Many Muwallads held key posts in the departments of civil administration, justice and the armed forces. Amrus ibn Yusuf, a Muwallad who was originally from Huesca, was appointed governor of Toledo by Hakam I in 797. Towards the end of the 11th century, the Muwalladun held distinctive posts in the judicial departments. The Caliph of Córdoba, Abd ar-Rahman III, once bestowed the post of chief qadi of Córdoba on a Christian convert, whose parents were still Christian and the Fuqaha found much difficulty in dissuading him. The secretary of the Córdoban Emir, Abd'Allah, was a Muwallad. The commander of the Córdoban force in the battle of Alhandega against the Zamorans in 938 was a Neo-Muslim Slavic general named Najdah. The 10th century Muwallad historian Ibn al-Qūṭiyya was descended directly from the maternal side to the Visigothic King Wittiza.[6] In about 889 a ship carrying twenty Berber Muwallad adventurers from Pechina near Almería established a fortress in Fraxinet, in the Gulf of Saint-Tropez in Provence. They spoke both Latin (Mozarabic?) and Arabic.[8]

Several Muwalladun became rich burgesses and powerful magnates by means of their activities in trade, activity and agriculture. The Muwallads of Elvira had become so powerful and strong in the reign of Abd'Allah that they rose under a chief named Nabil and successfully drove the Moors out of the city. The Banu Qasi dynasty which ruled the entire Ebro valley in the 9th and 10th centuries, became so powerful that they broke free from the control of the Umayyad dynasty of Córdoba and turned from a semi-autonomous governorship into an independent taifa.[6]

The Muwalladun were the mainstay of the economic framework of the country. They together with the Mozarabs constituted the productive classes which were craftsmen and small tradesmen in the towns, farmer and labourers in the rural countryside. However, they were inferior to the Arabs and Berbers in social status. Prominent positions in government and society were usually not available to individuals of Muladi descent. In spite of the Islamic doctrine of equality and brotherhood of Muslims, the Muwalladun were often looked down upon with the utmost contempt by the Arab and Berber aristocrats and were usually pejoratively referred to as "the sons of slaves".[6]

The Muwallads, in turn, in spite of their profession of faith, despised the Arabs whom they viewed as colonialists and foreign intruders. This mutual feeling of hatred and suspiscion provoked frequent revolts and led the Muwallads to support the Abbasid political agents, the preachers of Shu'ubiyya (a non-Arab movement), and subversive activities against the Umayyad rule in Iberia.[6] The Shu'ubiyyah of Al-Andalus were active like the Arabs in promoting the Arab-Islamic culture and language and claimed their integration with the Arab ethnic groups. The Shu'ubiyyah movement demanded equality of power, wealth and status of the Non-Arab Berbers and Muwalladun by Arabs. Some judges of Huesca upheld the cause of the Muwalladun in the beginning of the 10th century, and a literary epistle of the middle of the 11th century repeated arguments of Eastern Shu'ubite writers.[9]

In Al-Andalus, the large numbers of Christians adopting Islam prompted concern among the authorities about the weakening of the tax base and further inflamed resentment towards the Muwallads.[10]

The Muwallads were in almost constant revolts against the Arab and Berber immigrants who had carved out large estates for themselves, farmed by Christian serfs or slaves.[10] The most famous of these revolts were led by a Muwallad rebel named Umar ibn Hafsun in the region of Málaga and Ronda mountains. Ibn Hafsun ruled over several mountain valleys for nearly forty years, having the castle Bobastro as his residence. He rallied disaffected muwallads and mozárabs to his cause. Ibn Hafsun eventually renounced Islam with his sons and became a Christian, taking the name Samuel and proclaimed himself not only the leader of the Christian nationalist movement, but also the champion at the same time of a regular crusade against Islam. However, his conversion soon cost him the support of most of his Muwallad supporters who had no intention of ever becoming Christians, and led to the gradual erosion of his power.[11]

There were also other Muwallad revolts throughout Al-Andalus. In the Elvira region, for instance, discord sprang up between the Muwallads and Moors, the latter being led by Sawar ibn Hamdub, and the poet, Sa'ad ibn Judi, both of whom fluctuated between insurrection against Abd'Allah and submission to him. In Seville, the second largest city after Córdoba, there was a vicious feud between the two Arab aristocratic families, Banu Hajjaj and Banu Khaldun, and two Muwallad noble families, Banu Angelino and Banu Sabarico, which finally left Ibrahim ibn Hajjaj as the ruler of an independent city-state.[6]

In 805, the Muwallads of Córdoba, incited by certain theologians, revolted against the Umayyads under Hakim I, but the uprising was suppressed. In 814, there was a second revolt of Muwallads in Corboba, and this time the revolt was put down with the utmost severity, and resulted in the expulsion of 9,500 Muwallads from Córdoba, with over 1,500 going to Alexandria and 8,000 to Fez. In 858, there was a Muwallad revolt in Mérida which was led by Ibn Marwan. The Muwallads complained of the taxation of their lands as if they were still Christian. The revolt's outcome was the defeat of Ibn Marwan. Mérida was subdued, but the centre of revolt soon moved to Badajoz.[6]

The Muwallads were sometimes assisted by the local Mozarab population and occasionally, by the Christian powers, in their revolts. For instance, when the Muwalladun of Toledo, aided by the large Mozarabic population of the city revolted, Ordoño I of Asturias, promptly responded to their appeal for help, but the Emir's forces were routed the Toledans and Asturians on the Guadacelete in 854.[6]

Many minor rebels from among the Muladi leadership took possession of various sites, evolving into semi-independent Emirs. These included:

On the western frontier of Al-Andalus, the Muwalladun and Berber families divided the control of the region containing Mérida, Badajoz, and their environs.[6]