The Transfiguration of Jesus is an event reported by the in which is transfigured upon a mountain (), and the three Apostles are described as interpreting Jesus' statement as a reference to .(

Christian commemorations of the Transfiguration

In the Eastern Orthodox, Catholic, and Anglican churches, the Feast of the Transfiguration is observed on and is considered a major feast, numbered among the twelve in Orthodoxy. In all three churches, if the feast falls on a Sunday, its liturgy takes the place of the Sunday liturgy. In some s the last Sunday in the (that immediately preceding ) is also devoted to this event. 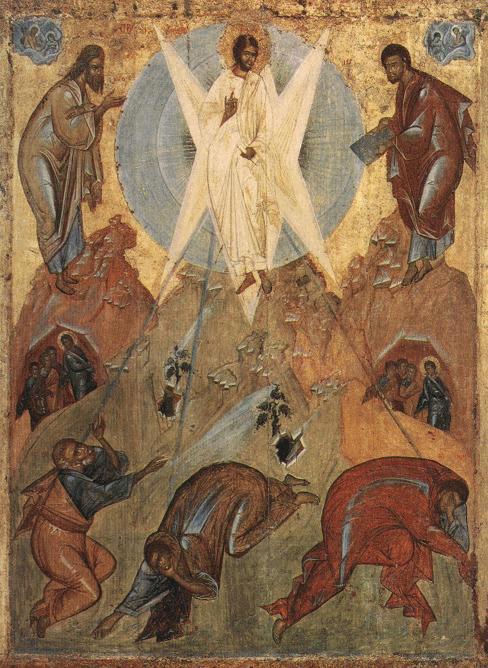 In the , grapes are traditionally brought to church to be blessed after the on this day (if grapes are not available in the area, apples or some other fruit may be brought). This begins the "Blessing of " for the year. The Transfiguration falls during the , but fish, wine and oil are allowed to be consumed on this day in recognition of the feast. The Transfiguration is the second of the "Three Feasts of the Saviour in August", the other two being the (August 1) and the of Christ (August 16). The Orthodox view the Transfiguration as not only a feast in honor of Jesus, but a feast of the ; for all three Persons were actively present: spoke from heaven; was the one being transfigured, and was present in the form of a cloud. In this sense, the transfiguration is also considered the "Small Epiphany" (the "Great Epiphany" being that of the , where the Holy Trinity appears in a similar pattern).

In the Catholic Church, the Transfiguration was once celebrated locally in various parts of the Catholic world on different days, including August 6, but was not universally recognized. In , the repulsed an Ottoman invasion of the Balkans by breaking the . News of the victory arrived in Rome on August 6. [http://www.breviary.net/propsaints/propsaints03/propsaints03283.htm] Given the importance to international politics at that time of such battles between Christian and Muslim nations, in celebration of the victory Pope elevated the Transfiguration to a Feast day to be celebrated in the entire Catholic Church.