The Melchizedek priesthood is the name of several priesthoods in different religions. Priesthood is generally attributed to Melchizedek as he is the first individual to be given the title Kohen (priest) in the bible (Torah). 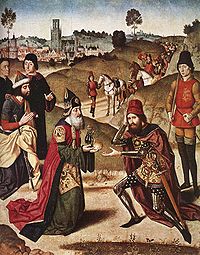 Meeting of Abraham and Melchizedek — by Dieric Bouts the Elder, 1464–67

Melchizedek is a figure in the Hebrew Bible. There is no other evidence other than the Biblical record that indicates that Melchizedek was a historical figure. Some scholars[who?] maintain that grammar and stylistic considerations indicate that the account of Melchizedek is a later because of the mention of Abraham[clarification needed].

In some translations[which?], the Book of Psalms names Melchizedek as representative of the priestly line through which a future king of Israel's Davidic line was ordained. Alternatively, it may be more accurate that this term was here intended to be treated as an agglutinated improper noun, and thus translated as rightful king rather than left as Melchizedek; this interpretation is taken by some modern translations, such as the New JPS Tanakh.

The Law of Moses stipulates that only the male descendants of Aaron of the tribe of Levi be commissioned to serve as Jewish priests) before the God of Israel. This commission is believed in Judaism to be a "a covenant of everlasting priesthood" and not eligible for replacement by other tribes of Israel.

Judaic midrash (exegesis) identifies Melchizedek with Shem the son of Noah.[citation needed] Although the Book of Genesis affirms that Melchizedek was "priest of God Most High." (Genesis 14:18), The Midrash and Babylonian Talmud maintain that the priesthood held by Melchizedek, who pre-dated the patriarch Levi by five generations (Melchizedek pre-dates Aaron by five generations; Abraham, Issac, Jacob, Levi, Kehoth, Amram, Aaron) was given in his stead to Abraham who in turn passed it on to his patrilineal descendents, Issac and then to Jacob. Midrashic literature attributes this transition as a consequence due to Melchizedek preceding the name of Abraham to that of God,[1] while some Jewish commentators, such as Chaim ibn Attar, write that Melchizedek gave the priesthood to Abraham willingly.

Maimonides, in his Mishna Torah compilation, explains that Jacob separated his son Levi from his other sons and appointed him to instruct and teach the ways of service to God, specifically the servicial methods used by -his forfather- Abraham, to his brothers. He also instructed his sons to perpetuate this status of Levi ("Shevet Levi") for eternity (Maimonides, Avodah Zorah 1:15). For the prelude of this choice see Targum Yonathan to Genesis 32:25, and/or Pirkei de-Rabbi Eliezer ch. 37. In midrash, it is written that Amram the son of Kohath the son of Levi was the spiritual leader of the sons of Jacob ("Israel") during their Egyptian Bondage.[citation needed] Following his passing, his post was assumed by his son Aaron.

At the time of the erection of the Tabernacle, God commanded Moses to appoint Aaron and his sons to the Jewish priestly service as a precondition to God revealing his Shechinah amongst the nation of Israel;

And Ahron and his sons I will sanctify to serve me and I will dwell amidst the sons of Israel and I will be to them a God, and they will know that I (am) God their Master that took them out from the land of Egypt (in order that) I (will) dwell in their midst
—Exodus 29:44-46

King David in the Psalms refers to the future King of kings or Messiah as a "priest for ever after the order of Melchizedek." (Psalm 110:1-4.)

And verily they that are of the sons of Levi, who receive the office of the priesthood, have a commandment to take tithes of the people according to the law, that is, of their brethren, though they come out of the loins of Abraham: But he whose descent is not counted from them received tithes of Abraham, and blessed him that had the promises" (Hebrews 7:5-6).

If therefore perfection were by the Levitical priesthood, (for under it the people received the law,) what further need was there that another priest should rise after the order of Melchisedec, and not be called after the order of Aaron? For the priesthood being changed, there is made of necessity a change also of the law" (Hebrews 7:11-12).

The author of the Epistle to the Hebrews in the New Testament discussed this subject considerably, listing the following reasons for why the priesthood of Melchizedek is superior to the Aaronic priesthood:

The epistle goes on to say that the covenant of Jesus is superior to the covenant the Levitical priesthood is under. Some Christians hold that Melchizedek was a type of Christ, and some other Christians hold that Melchizedek indeed was Christ. Reasons provided include that Melchizedek's name means "king of righteousness" according to the author of Hebrews, and that being king of Salem makes Melchizedek the "king of peace." Heb. 7:3 states, "Without father or mother, without genealogy, without beginning of days or end of life, like the Son of God he (Melchizedek) remains a priest forever." Melchizedek gave Abraham bread and wine, which Christians consider symbols of the body and blood of Jesus Christ, the sacrifice to confirm a covenant.

In the Church of Jesus Christ of Latter-day Saints 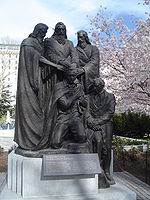 In The Church of Jesus Christ of Latter-day Saints, the Melchizedek Priesthood is viewed as the priesthood authority of the Twelve Apostles of Jesus and other Old Testament prophets, higher than that of the Aaronic authority of John the Baptist and of the Levites. According to the Book of Mormon, the prophet Melchizedek preached repentance to the people of a wicked city, and established peace in the land. According to Alma 13:18, Melchizedek's efforts earned him the title of "the prince of peace." Of particular importance is the parallel Hebrew meaning of "prince of peace" and "king of Salem," another of Melchizedek's titles, and his association with (or typology of) Jesus Christ, who is also called the Prince of Peace (Isa. 9:2) as well as the Great High Priest (Heb. 4:14). Later, Melchizedek's people were, according to Joseph Smith, Jr., caught up, or "translated" (see Translation (LDS Church), to meet the city of Enoch (Joseph Smith Translation of Genesis 14:34). The priesthood is referred to by the name of Melchizedek because he was such a great high priest (Doctrine & Covenants Section 107:2). The Doctrine and Covenants states that before Melchizedek's day the Priesthood "was called the Holy Priesthood, after the Order of the Son of God. But out of respect or reverence to the name of the Supreme Being, to avoid the too-frequent repetition of his name, they, the church, in the ancient days, called that priesthood after Melchizedek, or the Melchizedek Priesthood" (Doctrine & Covenants Section 107:3-4). Initially, the only Melchizedek Priesthood office in the LDS Church was elder. Later revelations extended the office complement to Seventy, High Priest, and Apostle.

Interpretations of the Melchizedek priesthood

Catholics find the roots of their priesthood in the tradition of Melchizedek. (CCC 1544)[3] In Genesis 14:18, Melchizedek offers a sacrifice of bread and wine. Christ therefore fulfilled the prophecy of Ps 110:4, that he would be a priest "after the order of Melchizedek," at the Last Supper, when he broke and shared bread with his disciples. Catholics take seriously Christ's command that the Apostles should "do this in memory of Me." As such, the Catholic Church continues to offer sacrifices of bread and wine at Mass, as part of the sacrament of the Eucharist.

Some Christian evangelicals and Messianic Jews hold that Christ will return as the true Messiah in the name. According to this view, which is taken from a literalist interpretation of Revelation 20, he will serve as both King and High Priest (e.g. the Melchizedek priesthood) in a coming millennium of the Messiah.

A more mainstream Protestant theological understanding simply holds that the mysterious Melchizedek priesthood refers to Jesus as the eternal priest. His once-made sacrifice fulfilled the need for atonement of sins and he currently rules within the Church. In this via traditions of the Book of Hebrews, Jesus has ever been, is, and will ever be the only totally perfect priest (Hebrews 9–-7). Amillennialists believe that the messiah has already come, and his earthly role has been fulfilled. This is contrary to millenarianism which expects a pre-millennial return of Christ as Messiah.

Some Christians believe Jesus Christ the Son came to Earth at various times before the New Testament, including once as Melchizedek himself. These appearances are called Christophanies. Others still maintain that Melchizedek is actually Archangel Michael: Michael is designated in the apocryphal Book of Enoch and the canonical Book of Daniel as "the prince of Israel". He is the angel of forbearance and mercy (Enoch, xl:3) who taught Enoch the mysteries of clemency and justice (lxxi:2). In the book of Jubilees (i:27 and ii:1), the angel who is said to have instructed Moses on Mount Sinai and to have delivered to him the tables of the Law is most probably Michael. Still others believe that Michael is Jesus.