listen) is the largest city in the Ancash Region of Peru, and the capital of both Santa Province and Chimbote District.

The city is located on the coast in Chimbote Bay, south of Trujillo and 420 kilometers (260 mi) north of Lima on the North Pan-American highway. It is the start of a chain of important cities like Trujillo, Chiclayo and Piura. The advantages of this geographic location made Chimbote into a transshipment junction for the Santa River valley.

In 1835, when General Santa Cruz granted Chimbote's first official acknowledgement, Chimbote was a village of fishermen with a population of no more than 800.

In 1871, an agreement was made with Henry Meiggs to build a railroad towards the interior of the country. Chimbote was classified as a port, even though its population remained around 1,000. The opening of the Pan-American Highway created easy access to Lima in the 1930s.

In 1940, Chimbote was still a small fishing port, with only 2,400 inhabitants in an urbanized area of 80 hectares (0.80 km2; 0.31 sq mi). In 1943, the government created the Corporación Peruana del Santa (Peruvian Corporation of Santa). This entity assumed ownership of the railroad, made improvements to the port, and began work on a hydroelectric power station on the Río Santa (in the Cañón del Pato [Duck Canyon] in Huallanca). The first stage of the power station was inaugurated in 1958; also that year, an iron and steel plant was built.[nb 1] By 1943, the first companies dedicated to the extraction of liver from the Pacific bonito fish arrived. This liver was sold for a high price abroad due to World War II.

Chimbote has a variable but warm climate. On average, the warmest month is February with temperatures a little over 26 °C (79 °F). September is considered the average coolest month, at around 13 °C (55 °F). The annual average temperature ranges between 13 to 28 °C (55 to 82 °F).

The city gets little to no precipitation; however, thick fog predominates through the months of May to November, usually overnight. Rainfall usually comes in February. 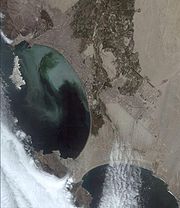 The influx of residents was closely bound to the creation of the Corporación Peruana del Santa, to the start and development of the fishing industry, and to the establishment of the iron and steel plant ("Siderperu"). Together, these multiplied the commercial and productive activities of the port. At the beginning of 1996, as Peruvian public companies were privatized, the Peruvian-Brazilian company Acerco bought Siderperu.

During the 1970s, the El Niño climate pattern, an earthquake, and overfishing drastically affected the fishing industry, and restrictions were imposed to ensure its survival. More than 75 percent of Peru's fishing industry is based in Chimbote.

Chimbote is the largest fishing port in Peru. Chimbote has more than 30 fish factories. Chimbote's active commerce and its diversified industrial development are characteristic of the city. Its population includes workers who have experience in fishing, naval, canning, and the iron-and-steel industry.

Shortly after the fish canning industry declined, the industrialization of anchoveta fishing peaked. This attracted people from all over Peru, due to the high wages paid in the fishing industry at the time, fueling Chimbote's suburban growth. The strong migratory wave toward the city increased because of the serious crisis of the countryside in the 1960s, particularly in Ancash, Cajamarca and the northern part of La Libertad Region. The axis of development moved from the Pima cotton, sugarcane, and rice plantations to the large city. In addition, Chimbote was a natural exit channel for the exports of the Santa valley, and a starting point for the entry to the Callejón de Huaylas.

The Peruvian anchoveta boom created wealth in the city, but it soon ended due to indiscriminate fishing that overwhelmed the bio-mass. An earthquake in 1970 damaged to the facilities of the fishing industries, causing unemployment and impoverishment. During this period, the Diocese of Chimbote created the Social Welfare Commission, to organize diverse popular dining places in conjunction with Unicef.[vague]In 2004, the Roman Catholic Diocese of Pittsburgh raised funds for the Chimbote Mission through the Chimbote Foundation.[2]

Chimbote is surrounded by two natural bays, the Bay of Chimbote (or Ferrol) and the Bay of Samanco, both with excellent harbor conditions. Chimbote forms a conurbation with Nuevo Chimbote District to the south. Between these districts, the Humedales de Villa María, a swamp, is home to a local species of heron, along with many species of frogs and fish. The swamp is formed by the Lacramarca River.

To the south of the city, there are many beaches, such as Vesique, Los Chimús, Tortugas, Caleta Colorada and el Dorado. Also located near Chimbote is the Isla Blanca (white isle, in English), which takes its name from the white color of the ground. Isla Blanca measures approximately 3,200 meters (10,500 ft) in length and 920 meters (3,020 ft) in width, and reaches 204 meters (669 ft) above sea level.

Located next to the city is the Cerro de la Juventud (Mountain of Youth), also called Cerro de la Paz (Mountain of Peace). Since 1985, this tourist attraction attracts hundreds annually. Visitors appreciate a panoramic view of Chimbote's bay from the top of this mountain. Tourists can also visit Isla Blanca Boulevard, which has many beautiful marble sculptures and fountains.

From Chimbote, some short tourist circuits can be taken:

Chimbote has two important celebrations during the year: Holy Week and The Festivity of San Pedrito of Chimbote (also called Chimbote's Civic Anniversary).

The city is known for its ceviche, a popular Peruvian dish whose ingredients include white fish, octopus, seashell, squid, crab, and red hot pepper.

The Chimbote-Huallanca rail line, built in 1922, serves as a railway for coal and iron mines on the interior and a railway for the river valley by transporting rice, cotton, sugarcane, and bananas.

El Chimbador Bus Terminal is Chimbote's primary ground transportation facility. The bus terminal is located outside of the city. It has become a vital connection for the region's workers, travelers and visitors, serving nearly 6,000 passengers a day.[citation needed] Currently[when?] there are 30 bus carriers offering services for national and international travel.

The port of Chimbote is one of the most beautiful and safest ports in the Peruvian coast. It extends 12 kilometers (7.5 mi), from Caleta Colorada Bay (Red Creek Bay) in the north, where the present marine facilities are located, to Anconcillo in the south.

The city is served by the Teniente FAP Jaime Montreuil Morales Airport, operated by CORPAC S.A. It was created in 1957 under the government of President Manuel Prado Ugarteche. There are regular flights to Lima by LC Busre.