Drava or Drave (Hungarian: Dráva; German: Drau; Italian, Croatian, and Slovene: Drava) is a river in southern Central Europe, a tributary of the Danube. It sources in Toblach/Dobbiaco, Italy, and flows east through East Tirol and Carinthia in Austria, into Slovenia (142 km),[1] and then southeast, passing through Croatia and forming most of the border between Croatia and Hungary, before it joins the Danube near Osijek.

In the ancient times the river was called Dravus. The name is most likely Celtic or pre-Celtic in origin (see Old European hydronymy). The Drava and Spöl are the only two rivers that originate in Italy and drain into the Danube drainage basin. It is the fourth largest and longest Danube tributary.[2] The Gail in Austria, the Meža and Dravinja in Slovenia, and the Bednja in Croatia from the right; the Gurk and the Lavant in Austria, and the Mur (near Legrad) in Croatia from the left are its main tributaries.

The Drava flows through Innichen/San Candido in Italy, Lienz, Spittal an der Drau, Villach, and Ferlach in Austria, Dravograd, Vuzenica, Muta, Ruše, Maribor, Ptuj, and Ormož in Slovenia, Varaždin and Osijek in Croatia, and Barcs in Hungary, being navigable for about 90 km from Čađavica in Croatia to its outfall.

The hydrological parameters of Drava are regularly monitored in Croatia at Botovo, Terezino Polje, Donji Miholjac and Osijek.[3] 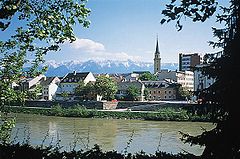 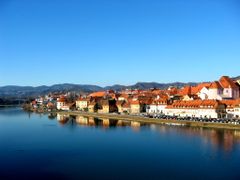 The Drava at Maribor, Slovenia.