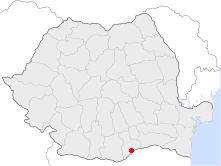 Giurgiu is the capital city of , , in the . It is situated amid mud-flats and marshes on the left bank of the facing the n city of on the opposite bank. Three small islands face the city, and a larger one shelters its port, Smarda. The rich corn-growing land to the north is traversed by a railway to , the first line opened in Romania, which was built in 1869 and afterwards extended to Smarda. Giurgiu exports timber, grain, salt and petroleum, and imports coal, iron, and textiles.

The , the only one in the shared n-Romanian section of the Danube, crosses the river nearby.

The area around Giurgiu was densely populated at the time of the ns () as archeological evidence shows and even the capital of was in this area (it is thought to be in on the Argeş river). During the Roman times this was the site of Theodorapolis, a city built by the Roman emperor Justinian (-).

The city of Giurgiu was probably established in the as a port on the by the Genoese merchant adventurers, who established a bank, and a trade in silks and velvets. They called the city after the patron saint of Genoa, San Giorgio (); and hence comes its present name. It was first mentioned in Codex Latinus Parisinus, in 1395 during the reign of and was conquered by the Ottomans in 1420 as a way to control the Danube traffic. Ottomans named the city as "Yergöğü", which means "Earthsky". Most probably, this name was given because of the similarity between the pronunciation sound of the original name of the city "Giurgiu" and "Yergöğü".

As a fortified city, Giurgiu figured often in the wars for the conquest of the lower Danube; especially in the struggle of Mihai Viteazul (1593–1601) against the Turks, and in the later . It was burned in 1659. In 1829, its fortifications were finally razed, the only defence left being a castle on the island of , united to the shore by a bridge.

In 1952–1954, during the Communist regime, the helped build the bridge between Giurgiu and Ruse, The Bridge of Friendship, the only bridge on the Danube linking Romania and Bulgaria.