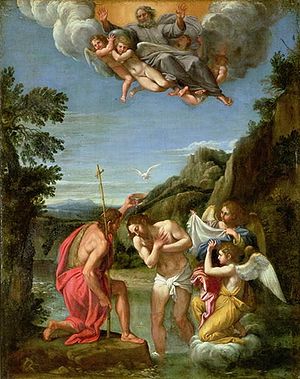 Francesco Albani's The Baptism of Christ, when Jesus became one with God according to Adoptionism

Adoptionism, sometimes called dynamic monarchianism, is a minority Christian belief that Jesus was adopted as God's son (Son of God) at his baptism. According to Epiphanius's account of the Ebionites,[1] the group believed that Jesus was chosen because of his sinless devotion to the will of God.

Adoptionism was declared heresy at the end of the 2nd century and was rejected by the First Council of Nicaea, which held to the orthodox doctrine of the Trinity, identifying Jesus as eternally begotten of God.[2]

Some scholars see Adoptionist concepts in the Gospel of Mark and in the writings of the Apostle Paul. According to this view, though Mark has Jesus as the Son of God, occurring at the strategic points of 1:1 ("The beginning of the gospel about Jesus Christ, the Son of God", but not in all versions, see Mark 1) and 15:39 ("Surely this man was the Son of God!"), but the Virgin Birth of Jesus has not been developed.[3] [4] By the time the Gospels of Luke and Matthew were written, Jesus is portrayed as being the Son of God from the time of birth, and finally the Gospel of John portrays the Son as existing "in the beginning". [5]

In The Orthodox Corruption of Scripture, popular author and text critic Bart D. Ehrman argues that the Adoptionist Theology may date back almost to the time of Jesus and his view is shared by many other scholars[citation needed]. The first leader of the Church was James the Just who succeeded his brother Jesus of Nazareth. [6] They were located in and about Jerusalem, perhaps in the Cenacle, and proclaimed that Jesus was the promised Messiah. These early Jewish Christians were thought to have been called Nazarenes. The term Nazarene was first applied to Jesus.[7] and later to the Jewish Sect that believed Jesus was the Messiah.[8] It is close to an historical certainty that Matthew belonged to this group.[9] Some believe that the non-canonical Gospel of the Hebrews or the Gospel of the Apostles [10][11] [12] [13][14] was an early account of the life and teachings of Jesus, written by a person named Matthew.[15] According to the Church Fathers, he was the same person as the Apostle Matthew. No copies exist: what is known about this book is from quotes, including by that of the church leader Papias ca. 125. As recorded in Epiphanius's account, when Jesus is baptized it states, "Jesus came up from the water, Heaven was opened, and He saw the Holy Spirit descend in the form of a dove and enter into Him. And a voice from Heaven said, ‘You are my beloved Son; with You I am well pleased.’ And again, ‘Today I have begotten You.’ Immediately a great light shone around the place." [16][17][18]

Due to recorded predictions of the destruction of the temple, the Gospel of Mark is believed by many modern-critical scholars to have been composed around or shortly after the fall of Jerusalem, and near universal, scholarly consensus holds that it was the first written of the four canonical gospels.[19][20][21][22][22][23] [24] [25] [26] [27] The phrase "Son of God" is not present in some early manuscripts at Mk 1:1.[28] Ehrman uses this omission to support the notion that the title "Son of God" is not used of Jesus until his baptism, and that Mark reflects an adoptionist view. The words, "Today I have begotten you," are omitted from the canonical Gospel of Mark, however, and it is therefore generally believed to have less adoptionist tendencies than the Gospel of the Hebrews.[5]

Paul's writings do not mention a Virgin birth of Christ, and some contend that Paul had never heard of it[who?]. Paul wrote that Jesus was "born of a woman, born under the law" and "as to his human nature was a descendant of David" in the Epistle to the Galatians and the Epistle to the Romans. The Epistle to the Hebrews states [29] that God said, "You are my son. Today I have begotten you," a phrase that shows adoptionist tendencies. It is also almost a direct quote from the second Psalm. [30] [31]

The Gospels of Matthew and Luke were written several years after Paul's letters. [32] The authors composed their gospels based on earlier Christian documents such as the Q Gospel and the Gospel of Mark.[33][34]

In the 2nd century, adoptionism was one of two competing doctrines about the nature of Jesus Christ, the other (perhaps endorsed in the Gospel of John) being that he pre-existed as some sort of divine concept, agency, or spirit (the Logos of God).[35]

Historically, there were three waves of Adoptionist speculation if we exclude the hypothetical beliefs of the primitive church that cannot be determined with certainty. The first, which dates from the 2nd century, differs significantly from the subsequent two (dating respectively from the 8th and the 12th century), which follow the definition of the dogma of the Trinity and Chalcedonian Christology.

Adoptionism is one of two main forms of monarchianism (the other is modalism, which regards "Father" and "Son" as two aspects of the same subject). Adoptionism (also known as dynamic monarchianism) denies the pre-existence of Christ, and although it explicitly affirms his deity, many classical trinitarians claim that the doctrine implicitly denies it. Under Adoptionism Jesus is currently divine and has been since his adoption, although he is not equal to the Father.[36]

Adoptionism was one position in a long series of Christian disagreements about the precise nature of Christ (see Christology) in the developing dogma of the Trinity, an attempt to explain the relationship between Jesus of Nazareth, both as man and (now) God, and God the Father while identifying as monotheistic. It differs significantly from the doctrine of the Trinity that was later affirmed by the ecumenical councils.

The first known exponent of Adoptionism in the 2nd century is Theodotus of Byzantium. He taught[37] that Jesus was a man born of a virgin according to the Council of Jerusalem, that he lived like other men, and was most pious; but that at his baptism in the Jordan the Christ came down upon the man Jesus in the likeness of a dove. Therefore wonders (dynameis) were not wrought in him until the Spirit (which Theodotus called Christ) came down and was manifested in Him.[original research?] The belief was declared heretical by Pope Victor I.

In the 3rd century, Paul of Samosata, Patriarch of Antioch, promoted adoptionism. He said Jesus had been a man who kept himself sinless and achieved union with God. His views, however, did not neatly fit in either of the two main forms of Monarchianism.[citation needed]

Spanish Adoptionism was a theological position which was articulated in Umayyad and Christian-held regions of the Iberian peninsula in the 8th and 9th centuries. The issue seems to have begun with the claim of archbishop Elipandus of Toledo that – in respect to his human nature – Christ was adoptive Son of God. Another leading advocate of this Christology was Felix of Urgel. In Spain, Adoptionism was opposed by Beatus of Liebana, and in the Carolingian territories, the Adoptionist position was condemned by Pope Hadrian I, Alcuin of York, Agobard, and officially in Carolingian territory by the Council of Frankfurt (794).

Despite the shared name of "Adoptionism" the Spanish Adoptionist Christology appears to have differed sharply from the Adoptionism of early Christianity. Spanish advocates predicated the term adoptivus of Christ only in respect to his humanity; once the divine Son "emptied himself" of divinity and "took the form of a servant" (Philippians 2:7), Christ's human nature was "adopted" as divine.[39]

Historically, many scholars have followed the Adoptionists' Carolingian opponents in labeling Spanish Adoptionism as a minor revival of “Nestorian” Christology.[40] John C. Cavadini has challenged this notion by attempting to take the Spanish Christology in its own Spanish/North African context in his important study, The Last Christology of the West: Adoptionism in Spain and Gaul, 785-820.[41]

A third wave was the revived form ("Neo-Adoptionism") of Peter Abelard in the 12th century. Later, various modified and qualified adoptionist tenets emerged from some theologians in the 14th century. Duns Scotus (1300) and Durandus of Saint-Pourçain (1320) admit the term Filius adoptivus in a qualified sense. In more recent times the Jesuit Gabriel Vásquez, and the Lutheran divines Georgius Calixtus and Johann Ernst Immanuel Walch, have defended adoptionism as essentially orthodox.

A form of adoptionism surfaced in Unitarianism during the 18th as the virgin birth was increasingly denied by Unitarians[citation needed]. In the 19th century the term Psilanthropism, was applied by such as Samuel Taylor Coleridge who so called his own view that Jesus was the son of Joseph.[42])

In his novel Slaughterhouse Five, Kurt Vonnegut makes reference to a fictional work called "The Gospel from Outer Space," which is exactly like the canonical gospels, but it involves an Adoptionist scene during the Crucifixion. It appears Vonnegut was unaware that this was already an existing theology, and that he came up with it independently.