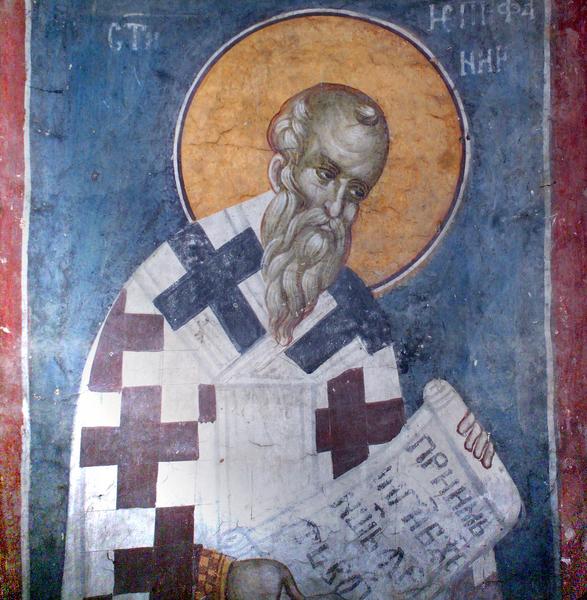 Epiphanius (ca. 310&ndash;320 &ndash; 403) was bishop of Salamis and metropolitan of Cyprus at the end of the 4th century AD. He is considered a . He gained the reputation of a strong defender of orthodoxy. He is best known for composing a very large compendium of the heresies down to his own time, full of quotations from them.

He was born into a family in the small settlement of Besanduk, near , , but converted to , and lived as a in , where he was educated and came into contact with Valentinian groups. Returning to around 333, when still a young man, he founded a monastery at Ad nearby [The more famous near was founded by an named Epiphanius towards the end of the sixth century; it was explored by an expedition from the , 1912-14.] which is often mentioned in the of with and John, Bishop of Jerusalem. He was a , and lived and studied as superior of the monastery for thirty years. He became versed in several languages including Hebrew, Syriac, Egyptian, Greek, and and was called by Jerome on that account "Pentaglossis" ("Five tongued").

His reputation for learning prompted his nomination and as of [Salamis was also known as Constantia after Constantine II.] in 367. He was also the Metropolitan of the . He served as bishop for nearly forty years, as well as traveling widely to combat unorthodox beliefs. He was present at a synod in (376) where the questions were debated against the heresy of . He upheld the position of Bishop Paulinus, who had the support of , over that of , who was supported by the Eastern Churches. In 382 he was present at the , again upholding the cause of Paulinus. During a visit to Palestine in 394 he attacked 's followers and urged the Bishop of to condemn his writings. Origen's writings were eventually condemned at the in 553. When Epiphanius was nearly 80, in 402, at the behest of Bishop Theophilus of Alexandria, the saint went to to support Theophilus in his campaign against , and the four "Tall Brothers." When he realized he was being used as a tool by Theophilus against Saint John Chrysostom, who had given refuge to the monks persecuted by Theophilus and who were appealing to the emperor, Epiphanius started back to Salamis, only to die on the way home in 403.

His earliest known work is the "Ancoratus" ("the well anchored man"), which includes arguments against and the teachings of .

His best-known book is the "" which means "Medicine-chest" (also known as "Adversus Haereses", "Against Heresies"), presented as a book of antidotes for those bitten by the serpent of heresy. Written between 374 and 377, it forms a handbook for dealing with the arguments of heretics. It lists 80 heresies, some of which are not described in any other surviving documents from the time. While Epiphanius often let his zeal come before facts - he admits on one occasion that he writes against the Origenists based only on hearsay ("Panarion", Haeresis 71) - the "Panarion" is a valuable source of information on the Christian church of the fourth century. The "Panarion" was only recently (1987 and 1990) translated into English.

Aside from the polemics by which he is known, Epiphanius wrote a work of biblical ism, called, for one of its sections, "On Measures and Weights" (περί μέτρω καί στάθμων). It was composed in Constantinople for a Persian priest, in 392. [Allen A. Shaw, "On Measures and Weights by Epiphanius" "National Mathematics Magazine" 11.1 (October 1936: 3-7).] The first section discusses the canon of the and its versions, the second of measures and weights, and the third, the geography of . The texts appear not to have been given a polish but consist of rough notes and sketches, his modern editor, Allen A. Shaw, concluded; nevertheless Epiphanius' work on was important in the .

The collection of homilies traditionally ascribed to a "Saint Epiphanius, bishop" are dated in the late fifth or sixth century and are not connected with Epiphanius of Salamis by modern scholars. [Alvar Erikson, "Sancti Epiphani Episcopi Interpretatio Evangelorum" (Lund) 1938, following Dom Morin.]

*CathEncy|url=http://www.newadvent.org/cathen/13393b.htm|title=Epiphanius of Salamis
* [http://www.tertullian.org/fathers/epiphanius_weights_03_text.htm Epiphanius, On Biblical Weights and Measures] English translation of a Syriac text
* [http://www.tertullian.org/rpearse/epiphanius.html Some excerpts from the "Panarion"]
* [http://essenes.crosswinds.net/panarion.htm Further excerpts from the "Panarion"]
* [http://www.ccel.org/fathers/NPNF2-06/letters/letter51.htm Letter from Epiphianus, Bishop of Salamis, in Cyprus, to John, Bishop of Jerusalem]
* [http://www.documentacatholicaomnia.eu/30_20_0320-0403-_Epiphanius_Salaminis_Episcopus.html Opera Omnia by Migne Patrologia Graeca with analytical indexes]