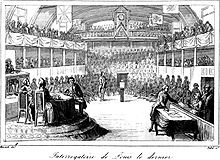 During the French Revolution, the National Convention or Convention, in France, comprised the constitutional and legislative assembly which sat from 20 September 1792 to 26 October 1795 (the 4th of Brumaire of the year IV under the French Republican Calendar adopted by the Convention). It held executive power in France during the first years of the French First Republic. It was succeeded by the Directory, commencing 2 November 1795. Prominent members of the original Convention included Maximilien Robespierre of the Jacobin Club, Jean-Paul Marat (affiliated with the Jacobins, though never a formal member), and Georges Danton of the Cordeliers. From 1793 to 1794, executive power was de facto exercised by the Convention's Committee of Public Safety.

During the insurrection of 10 August 1792, when the populace of Paris stormed the Tuileries and demanded the abolition of the monarchy, the Legislative Assembly decreed the provisional suspension of King Louis XVI and the convocation of a "national convention" which should draw up a constitution. At the same time it was decided that deputies to that convention should be elected by all Frenchmen 25 years old or more, domiciled for a year and living by the product of their labor. The National Convention was therefore the first French assembly elected by universal male suffrage, without distinctions of class. The age limit of the electors was further lowered to 21, and that of eligibility was fixed at 25 years.

The first session was held 20 September 1792. The following day, the French monarchy was abolished. A little over a year later, 22 September would become the base date of the new French Revolutionary Calendar, the beginning of the Year I of the French Republic.[1]

The Convention lasted for three years and came after the National Assembly and Legislative Assembly. The country was at war, and it seemed best to postpone the implementation of the new constitution until peace should be concluded. At the same time, as the Convention prolonged its powers, it extended them considerably in order to meet the pressing dangers which menaced the Republic.

Although it was a legislative assembly, it took over the executive power, entrusting it to its own members. This "confusion of powers", contrary to the philosophical theories – those of Montesquieu especially – which had inspired the Revolution at first, was one of the essential characteristics of the Convention. The series of exceptional measures by which that confusion of powers was created constitutes the "Revolutionary government" in the strict sense of the word, a government which was principally in vigour during the period called the "Reign of Terror". There is thus a distinction to be made, discussing the Convention, between these temporary expedients and those measures intended to be permanent.

The first years of the Convention were the height of the importance of the revolutionary political clubs such as the Jacobins and Cordeliers; the informally constituted Girondists, although past the peak of their power, were also an important factor. By the end of the Convention, most prominent members of all of these groups were dead, the bulk of them victims either of the Terror or of the Thermidorian Reaction that brought the Terror to an end.[2]

The Convention held its first session in a hall of the Tuileries, then it sat in the Salle du Manège, and finally from 10 May 1793 in that of the Spectacles (or Machine), an immense hall in which the deputies were but loosely scattered. This last hall had tribunes for the public, who often influenced the debate by interruptions or by applause.[3]

The members of the Convention came from all classes of society, but the most numerous were lawyers. Seventy-five members had sat in the National Constituent Assembly, 183 in the Legislative Assembly. The full number of deputies was 749, not counting 33 from the colonies, of whom only some arrived in Paris. Besides these, however, the newly formed départements annexed to France from 1792 to 1795 were allowed to send deputations. Many of the original deputies died or were exiled during the Convention, but not all their places were filled by suppléants. Some members proscribed during the Terror returned after the legislative coup of 9 Thermidor began the Thermidorian Reaction. Finally, many members were sent away, either to the départments or to the armies, on missions which lasted sometimes for a considerable length of time. For all these reasons it is difficult to find out the number of deputies present at any given date, for votes by roll-call were rare. During the Terror the number of those voting averaged only 250.

According to its own ruling, the Convention elected its president every fortnight. He was eligible for re-election after the lapse of a fortnight. Ordinarily the sessions were held in the morning, but evening sessions also occurred frequently, often extending late into the night. Sometimes in exceptional circumstances the Convention declared itself in permanent session and sat for several days without interruption. For both legislative and administrative the Convention used committees, with powers more or less widely extended and regulated by successive laws. The most famous of these committees included the Committee of Public Safety (Comité de salut public), the Committee of General Security (Comité de sûreté générale), and the Committee of Education (Comité de l’instruction).

The article on the Convention in the 1911 Encyclopædia Britannica concludes, "The work of the Convention was immense in all branches of public affairs. To appreciate it without prejudice, one should recall that this assembly saved France from a civil war and invasion, that it founded the system of public education (Museum, École Polytechnique, École Normale Supérieure, École des langues orientales, Conservatoire), created institutions of capital importance, like that of the Grand Livre de la Dette publique, and definitely established the social and political gains of the Revolution." By a decree of 4 February 1794 (16 pluviôse) it also ratified and expanded to the whole French colonial empire the 1793 abolition of slavery on Saint-Domingue by civil commissioners Sonthonax and Polverel, though this did not affect Martinique or Guadeloupe and was abolished by the law of 20 May 1802.