Marie François Sadi Carnot (French pronunciation: [maʁi fʁɑ̃swa sadi kaʁno]; 11 August 1837 – 25 June 1894) was a French statesman and the fourth president of the Third French Republic. He served as the President of France from 1887 until his assassination in 1894.

He was the son of the statesman Hippolyte Carnot and was born in Limoges, Haute-Vienne. His third given name Sadi was in honour of his uncle Nicolas Léonard Sadi Carnot a physicist who excelled in thermodynamics, who was always known as Sadi Carnot. Like his uncle, he too came to be known as Sadi Carnot. He was educated as a civil engineer , and was a highly distinguished student at both the École Polytechnique and the École des Ponts et Chaussées. After his academic course he obtained an appointment in the public service. His hereditary republicanism caused the government of national defence to entrust him in 1870 with the task of organizing resistance in the départements of the Eure, Calvados and Seine Inférieure, and he was made prefect of Seine Inférieure in January 1871. In the following month he was elected to the French National Assembly by the département Côte-d'Or. In August 1878 he was appointed secretary to the minister of public works. In September 1880 he became minister, and again in April 1885, passing almost immediately to the ministry of finance, which he held under both the Ferry and the Freycinet administrations until December 1886. 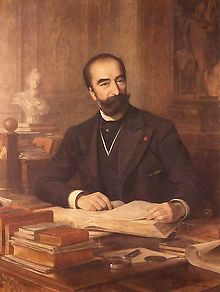 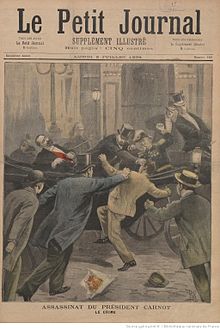 When the Daniel Wilson scandals occasioned the downfall of Jules Grévy in December 1887, Carnot's reputation for integrity made him a candidate for the presidency, and he obtained the support of Georges Clemenceau and many others, so that he was elected by 616 votes out of 827. He assumed office at a critical period, when the republic was all but openly attacked by General Boulanger.

President Carnot's ostensible part during this agitation was confined to augmenting his popularity by well-timed appearances on public occasions, which gained credit for the presidency and the republic. When early in 1889, Boulanger was finally driven into exile, it fell to Carnot to appear as head of the state on two occasions of special interest, the celebration of the centenary of the French Revolution in 1889 and the opening of the Paris Exhibition of the same year. The success of both was regarded as a popular ratification of the republic, and though continually harassed by the formation and dissolution of ephemeral ministries, by socialist outbreaks, and the beginnings of anti-Semitism, Carnot had only one serious crisis to surmount, the Panama scandals of 1892, which, if they greatly damaged the prestige of the state, increased the respect felt for its head, against whose integrity none could breathe a word. He was in favour of the Franco-Russian Alliance, and received the Order of St Andrew from Alexander III. 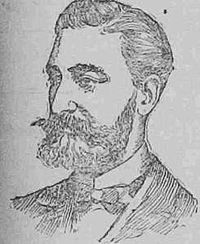 Sadi Carnot from an 1894 newspaper.

Carnot was reaching the zenith of popularity, when, on 24 June 1894, after delivering at a public banquet at Lyon a speech in which he appeared to imply that he nevertheless would not seek re-election, he was stabbed by an Italian anarchist named Sante Geronimo Caserio. Carnot died shortly after midnight on 25 June. The stabbing aroused widespread horror and grief, and the president was honoured with an elaborate funeral ceremony in the Panthéon.

Caserio described the assassination as a political act. He was executed on 14 August 1894.[1]