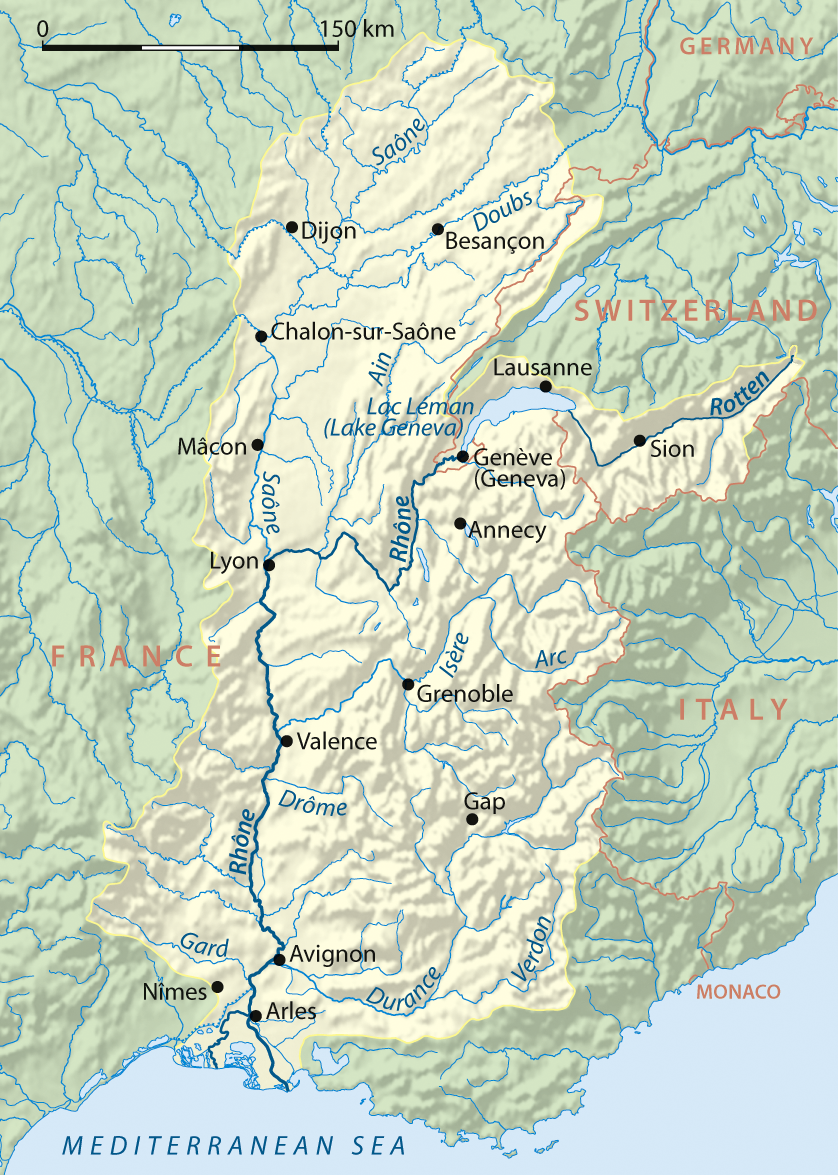 Before railroads and highways were invented, the Rhone was an important inland trade and transportation route, connecting the cities of , , , and to the Mediterranean ports of , and . Before this, travelling down the Rhone by barge would take 3 weeks - it now only takes 3 days. The Rhône is classified as a class V waterway [For classification of waterways see http://www.bureauvoorlichtingbinnenvaart.nl/index.php?option=com_content&task=view&id=25&Itemid=36] from the mouth of the Saône river to the sea. The Saône, which is also canalized, connects the Rhône ports to the cities of , and . Smaller vessels (up to CEMT class I) can travel further northwest, north and northeast via the Centre-Loire-Briare and Loing Canals to the , via the Canal de la Marne à la Saône (recently often called the "Canal entre Champagne et Bourgogne") to the , via the Canal des Vosges (formerly called the "Canal de l'Est - Branche Sud") to the and via the Canal du Rhône au Rhin to the .

The Rhone is infamous for its strong current when the river carries large quantities of water: current speeds up to 10 kilometers per hour (6 mph) are sometimes reached, particularly in the stretch below the last lock at and in some of the diversion canals. The ten river locks are operated daily from 05:00 a.m. till 09:00 p.m., but night operation can be requested and is usually granted [ [http://www.noordersoft.com/indexen.html NoorderSoft Waterways Database] ] .

Up to Brig, the Rhone is a torrent, and then becomes a great mountain river running SW through a glacier valley. Then, at Martigny it turns NW towards (French "Lac Léman"). It enters Lake Geneva near the Swiss town of Bouveret and exits it at the city of Geneva before entering France. The average annual discharge from Lake Geneva is 570 cubic metres per second (20,000 ft3/s) (

At , the Rhone divides itself in two arms, forming the delta, with all branches flowing into the . One arm is called the "Grand Rhône", the other one is the "Petit Rhônet". The average annual discharge at Arles is 2,300 m3/s (81,000 ft3)/s).

The Rhone has been an important highway since the times of the Greeks and Romans, but it was a difficult navigation, suffering from fierce currents, shallows, floods in spring and early summer when the ice was melting and droughts in late summer. Until the 19th century passengers travelled in "coches d'eau" (water coaches) drawn by men or horses or under sail. Most travelled with a painted cross covered with religious symbols as a protection against the hazards of the journey. [H. McKnight. "Cruising French Waterways", Adlard Coles 1991.]

Trade on the upper river used "barques du Rhône", sailing barges, 30 metres by 3.5 metres (100 ft x 10 ft), with a convert|75|t|lb|adj=on capacity. As many as 50 to 80 horses were employed to haul trains of 5 to 7 craft upstream. Goods would be transhipped at Arles into convert|23|m|adj=on sailing barges called "allèges d'Arles" for the final run down to the Mediterranean.

The first experimental was built at Lyon by in 1783, but regular services were not started until 1829 and continued till 1952. Steam passenger vessels 80 to 100 metres (260–330 ft) long made up to convert|20|km/h and could do the downstream run from Lyon to Arles in a day. Cargo was hauled in "bateau-anguilles", boats 157 metres by 6.35 metres (520 ft x 21 ft) with paddle wheels amidships and "bateaux crabes" where a huge toothed 'claw' wheel convert|6.5|m across which gripped the river bed in the shallows supplemented the paddles wheels.In the 20th century powerful motor barges propelled by diesel engines were introduced, carrying convert|1500|t|lb.

In 1933 the (CNR) was established to tame the river. Some progress in deepening the navigation channel and constructing scouring walls but brought this to a halt. In 1942, following the collapse of , Italian military forces occupied southeastern France up to the eastern banks of the Rhône, as part of the Italian Fascist regime's expansionist agenda. In 1948 construction started on a series of locked barrages and canal cuts with the joint aim of improving navigation and generating electricity, with locks raising boats up to convert|23|m. About 1/13 of France's electricity supply is now provided by these power stations.

The word "Rhone" comes from "Rhodanus", which itself comes from Greek IPA| ("Rhodanos"), which is the Greek rendering of the (Celtic) name of the river, as heard by the Greeks living in the colony of "Massalia" (). The Celtic name of the river, something like "Rodo" or "Roto", literally "that which rolls", or "that which runs", is a frequent name of rivers in the ancient Celtic tongue. It was also the name of the lower , as well as several other rivers of western Europe. This Celtic name comes from the Proto-Indo-European root *ret- ("to run, roll"), which gave the word "rota" ("wheel") in Latin, from which is derived "rotate" and "to roll" in English. s in modern Celtic languages are Irish "rith" and Welsh "rhedeg", both meaning "to run".

Some scholars posit that the root "rot-" or "rod-" found in the name "Rhone" as well as in the name of many western European rivers, and whose original meaning seems to be "river", is in fact , in which case it would only be a coincidence that it resembles the Proto-Celtic verb "reto" ("to run"). Further research is needed to decide between these two theories.

In French, the adjective derived from the river is "rhodanien", as in "le sillon rhodanien" (literally "the furrow of the Rhone"), which is the name of the long straight Saône and Rhone rivers valley, a deep cleft running due south to the Mediterranean and separating the from the .

Cities and towns along the Rhone include: