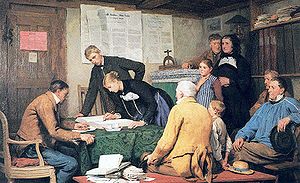 Civil marriage is marriage performed by a government official and not a religious organization.

Every country maintaining a population registry of its residents keeps track of marital status, and most countries believe that it is their responsibility to register married couples. Most countries define the conditions of civil marriage separately from religious requirements. Certain countries, such as Israel, only allow couples to register on the condition that they have first been married in a religious ceremony recognised by the state, or were married in a different country.

In medieval Europe, marriage was governed by canon law, which recognised as valid only those marriages where the parties stated they took one another as husband and wife, regardless of the presence or absence of witnesses. It was not necessary, however, to be married by any official or cleric. This institution was cancelled in England with the enactment of "Lord Hardwicke's Marriage Act" of 1753, which required that, in order to be valid and registered, all marriages were to be performed in an official ceremony in a religious setting recognised by the state, i.e. Church of England, the Quakers, or in a Jewish ceremony. Any other form of marriage was abolished. Children born into unions which were not valid under the Act would not automatically inherit the property or titles of their parents. For historical reasons, the Act did not apply in Scotland. Consequently, until 1940, it continued to be enough in Scotland for a man and a woman to pledge their commitment to each other in front of witnesses to legalise their marriage. This led to an industry of "fast marriages" in Scottish towns on the border with England; the town of Gretna Green was particularly well known for this. In 1836 the requirement that the ceremony take place in a religious forum was removed, and registrars were given the authority to register marriages not conducted by a religious official.

In other European countries 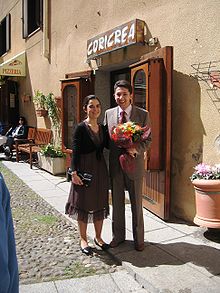 A couple waiting to get married in the town of Alghero on the island of Sardinia, Italy.

Many European countries had institutions similar to common-law marriage. In 1566, the edict of the Council of Trent was proclaimed denying Catholics any form of marriage not executed in a religious ceremony before a priest and two witnesses.

The Protestant pastor and theologian of Geneva John Calvin decreed that, in order for a couple to be considered married, they must be registered by the state in addition to a church ceremony.

In 1792, with the French Revolution, religious marriage ceremonies in France were made secondary to civil marriage. Religious ceremonies could still be performed, but only for couples who had already been married in a civil ceremony. Napoleon later spread this custom throughout most of Europe. In present-day France only civil marriage has legal validity. A religious ceremony may be performed after the civil union, but has no legal effect.

In Germany the Napoleonic code was valid only in territories conquered by Napoleon. With the fall of his empire, civil marriage in Germany began to die out. However, certain sovereign German states introduced civil marriages, which were either obligatory (like the French model) or optional, with either a religious or civil ceremony being accepted. Already before 1848 the Duchy of Saxe-Weimar-Eisenach enacted optional civil marriages, followed by the German republics of the Free City of Frankfurt upon Main (1850, obligatory), Free and Hanseatic City of Hamburg (1851, optional) and Free and Hanseatic City of Lübeck (1852, optional). German grand duchies such as Oldenburg (1852/1855, optional), Baden (1860) and Hesse (1860) as well as the Kingdom of Württemberg (1863) followed suit.[1] Civil marriages enabled interfaith marriages as well as marriages between spouses of different Christian denominations. After the union of Germany as one empire in 1871, the Reichstag adopted a bill initiated by Chancellor Otto von Bismarck as the "Civil Marriage Law" in 1875; since then, only civil marriages have been recognised in Germany. Religious ceremonies may still be performed at the couple's discretion. Until Dec. 31, 2008, religious marriages could not be performed until the couple had first married in a civil ceremony.

Civil marriage in the world currently

Today marriages in England must be held in authorised premises, which may include register offices, premises such as stately homes, castles and hotels that have been approved by the local authority, churches or chapels of the Church of England or Wales, and other churches and religious premises that have been registered by the registrar general for marriage.[2]

Civil marriages require a certificate, and at times a license, that testify that the couple is fit for marriage. A short time after they are approved in the superintendent registrar's office, a short non-religious ceremony takes place which the registrar, the couple and two witnesses must attend; guests may also be present.

In all states in the United States, it is possible to obtain a civil marriage. Such ceremonies are conducted before a local civil authority, such as a mayor, judge, deputy marriage commissioner or other public official. It is not uncommon for these ceremonies make mention of a deity, but most do not reference any specific religion. Many of these ceremonies take place in the town hall or local courthouse. As part of such ceremonies, a religious official such as a rabbi, pastor, or qadi may be given the authority to conduct the marriage by the state, thus unifying the religious with the civil ceremony.

In many countries such as France, The Netherlands, Belgium, Austria, Brazil, Switzerland and Russia, there is a civil ceremony requirement. Following the civil marriage ceremony, couples are free to marry in a religious ceremony. Such ceremonies, however, only serve to provide a religious recognition of the marriage, since the state's recognition has already been given. In some of these countries (e.g. The Netherlands and Belgium) most couples get married without any religious ceremony at all. Full, formal weddings, complete with wedding gowns and the presence of family and friends, are usually conducted in special ceremonial rooms in the town hall.

Countries with no civil marriage

There is no civil marriage in many Arab countries like Egypt, Lebanon, Syria [3], Jordan [4], UAE [5], Saudi Arabia, Yemen, Libya, Mauritania, as well as in Indonesia [6], Iran and Israel, among other countries; all marriages are conducted by religious authorities, and are registered by civil authorities only after having been registered by authorities of officially approved religions (Egypt, Israel and Lebanon all recognize Christianity, Islam and Judaism; in many Arab countries almost 100% citizens are Muslim), or, having been registered abroad. This yields particular problems for those who are refused divorce by their spouses, or couples in religious traditions that forbid divorce altogether. Malaysia allows civil marriage for non-Muslim only, while Kuwait, Bahrain, Afghanistan[7] allow it for foreign citizens only. 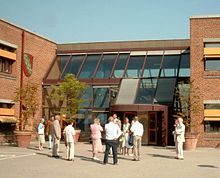 Since April 2001 to today, there are 10 countries, the Netherlands, Belgium, Spain, Canada, South Africa, Norway, Portugal, Sweden, Iceland and Argentina, which recognise marriages between same-sex couples, thus giving them the same rights afforded to heterosexual married couples. Israel,[8] Aruba, the Netherlands Antilles and one U.S. state, Maryland, recognise same-sex marriages registered in other countries, but do not recognise such marriages performed within their borders.

Six states in the United States legally allow same-sex civil marriage. These are Massachusetts, Connecticut, Iowa, New Hampshire, Vermont and New York. In 29 countries worldwide, and several other states within the U.S., a same-sex couple can be legally partnered in a civil union or registered partnership. Couples in these partnerships, first recognised in Denmark in 1989, are afforded rights and obligations similar to, but not identical to, those of a married couple. At the federal level in the United States, The Defense of Marriage Act (DOMA) defines marriage as being between a male and female. Additionally, many individual states in the U.S. do not recognise civil unions and refuse to afford same-sex couples in sexual relationships the same rights and responsibilities as married opposite-sex couples.