Michel Ney (French pronunciation: [miʃɛl ˈnɛ]), 1st Duc d'Elchingen, 1st Prince de la Moskowa (10 January 1769 – 7 December 1815) was a French soldier and military commander during the French Revolutionary Wars and the Napoleonic Wars. He was one of the original 18 Marshals of France created by Napoleon I. He was known as Le Rougeaud ("red faced" or "ruddy"[1]) by his men and nicknamed le Brave des Braves ("the bravest of the brave") by Napoleon. 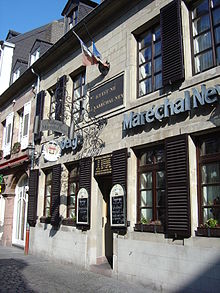 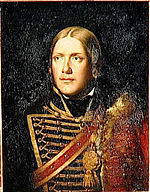 Michel Ney was born in Saarlouis, the second son of Pierre Ney (1738–1826), a master barrel-cooper and veteran of the Seven Years' War, and of his wife Margarethe Grewelinger (1739–1791). Ney was the paternal grandson of Matthias Ney (1700–1780) and wife Margarethe Becker (d. 1767), and the maternal grandson of Valentin Grewelinger and wife Margaretha Ding.[2] His hometown at the time of his birth comprised a French-speaking enclave in a predominantly German-speaking portion of Lorraine, and Ney grew up bilingual.

Ney was educated at the Collège des Augustins, and subsequently became a notary in Saarlouis, and then overseer of mines and forges.

The life as a civil servant did not suit Ney, and he enlisted in the Colonel-General Hussar Regiment in 1787.[2] Ney rapidly rose through the non-commissioned ranks. He served in the Army of the North from 1792–94, with which he saw action at the Cannonade of Valmy, the Battle of Neerwinden, and other engagements. Ney was commissioned in October 1792, transferred to the Sambre-et-Meuse in June 1794, and wounded at the Siege of Mainz. Ney was promoted to général de brigade in August 1796, and commanded cavalry on the German Fronts. On 17 April 1797, during the battle of Neuwied, Ney led a cavalry charge against Austrian lancers trying to seize French cannons. The lancers were beaten back, but Ney’s cavalry were counter-attacked by heavy cavalry. During the mêlée, Ney was thrown from his horse and made a prisoner of war; on 8 May he was exchanged for an Austrian general.[3] Following the capture of Mannheim, Ney was promoted to géneral de division in March 1799. Later in 1799, Ney commanded cavalry in the armies of Switzerland and the Danube. At Winterthur, Ney was wounded in the thigh and wrist. After Ney’s recovery he fought at Hohenlinden under General Moreau in December 1800. From September 1802, Ney commanded French troops in Switzerland and performed diplomatic duties. 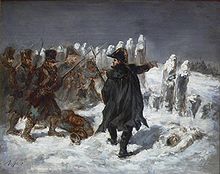 On 19 May 1804, Ney received his Marshal's baton, emblematic of his status as a Marshal of the Empire, the Napoleonic era's equivalent of Marshal of France.[4] In the 1805 campaign Ney took command of VI Corps of La Grande Armée, and was praised for his conduct at Elchingen.[4] In November 1805, Ney invaded the Tyrol, capturing Innsbruck from Archduke John. In the 1806 campaign, Ney fought at Jena and then occupied Erfurt. Later in the campaign, Ney successfully besieged Magdeburg. In the 1807 campaign Ney arrived with reinforcements in time to save Napoleon from defeat at Eylau, although the battle ended as a draw. Later in the campaign, Ney fought at Güttstadt, and commanded the right wing at Friedland. On 6 June 1808, Ney was created Duke of Elchingen.[4] In August 1808 Ney was sent to Spain in command of VI Corps, and won a number of minor actions. In 1809 he routed an Anglo-Portuguese force under Sir Robert Wilson at Baños. In 1810 Ney joined Marshal Masséna in the invasion of Portugal, where he took Ciudad Rodrigo from the Spanish and Almeida from the British and Portuguese, brusquely defeated the British on the River Côa, and fought at Buçaco. During the retreat from Torres Vedras, Ney worsted Wellington's forces in a series of lauded rearguard actions (Pombal, Redinha, Casal Novo, Foz d'Aronce) with which he delayed the pursuing enemy forces enough to allow the main French force to retreat unmolested. He was ultimately removed from command for insubordination.[4] 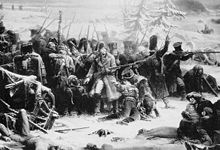 Marshall Ney supporting the Rear Guard During the Retreat from Moscow, by Adolphe Yvon on exhibition at the Manchester Art Gallery 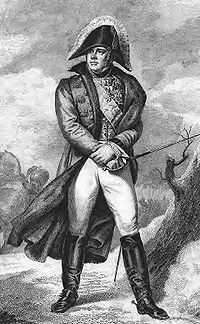 Known as "The Bravest of the Brave", Ney displayed great courage in action, above all during the retreat from Moscow, when he was reputed to have been the last Frenchman to leave Russian soil

Ney was given command of III Corps of La Grande Armée during the 1812 invasion of Russia. At Smolensk, Ney was wounded in the neck, but recovered enough to later fight in the central sector at Borodino. During the retreat from Moscow, Ney commanded the rear-guard and was anecdotally known as "the last Frenchman on Russian soil". After being cut off from the main army, Ney managed to rejoin it, which delighted Napoleon.[4] For this action Ney was given the nickname "the bravest of the brave" by Napoleon.[4] Ney fought at Beresina and helped hold the vital bridge at Kovno (modern-day Kaunas), where legend portrays Ney as the last of the invaders to cross the bridge and exit Russia.[4] On 25 March 1813, Ney was given the title of Prince of the Moskowa.[4] During the 1813 campaign Ney fought at Weissenfels, was wounded at Lützen, and commanded the left wing at Bautzen. Ney later fought at Dennewitz and Leipzig, where he was again wounded. In the 1814 campaign in France, Ney fought various battles and commanded various units. At Fontainebleau Ney became the spokesman for the Marshals' revolt on 4 April 1814, demanding Napoleon's abdication. Ney informed Napoleon that the army would not march on Paris; Napoleon responded "the army will obey me!" to which Ney answered, "the army will obey its chiefs".[5]

When Paris fell and the Bourbons reclaimed the throne, Ney, who had pressured Napoleon to accept his first abdication and exile, was promoted, lauded, and made a peer by the newly enthroned Louis XVIII. Although Ney had pledged his allegiance to the restored monarchy, the Bourbon court reacted coolly to his common origins. 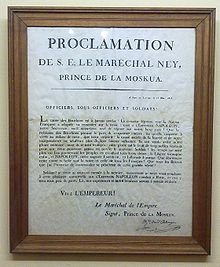 When hearing of Napoleon’s return to France, Ney, determined to keep France at peace and to show his loyalty to Louis XVIII, organized a force to stop Napoleon’s march on Paris. Ney also pledged to bring Napoleon back alive in an iron cage. Napoleon was aware of Ney’s plans and sent him a letter which said, in part, ‘I shall receive you as after the Battle of the Moskowa’.[6] Despite Ney’s promise to the King, he joined Napoleon at Auxerre, on 18 March 1815.

On 15 June 1815, Napoleon appointed Ney commander of the left wing of the Army of the North. On 16 June Napoleon's forces split up into two wings to fight two separate battles simultaneously. Ney attacked Wellington at Quatre Bras (and received criticism for attacking slowly,[7]) while Napoleon attacked Blücher's Prussians at Ligny. Although Ney was criticized for not capturing Quatre Bras early, there is still debate as to what time Napoleon actually ordered Ney to capture Quatre Bras.[8] At Ligny, Napoleon ordered General d'Erlon to move his corps (currently on Napoleon's left and Ney's right) to the Prussians' rear in order to cut off their line of retreat. D'Erlon began to move into position, but suddenly stopped and began moving away, much to the surprise and horror of Napoleon. The reason for the sudden change in movement is that Ney had ordered d'Erlon to come to his aid at Quatre Bras. Without d'Erlon's corps blocking the Prussians' line of retreat, the French victory at Ligny was not complete, and the Prussians were not routed.[9] To be fair, Ney was d'Erlon's direct superior and Napoleon never informed Ney of his plans.

At Waterloo Ney was again in command of the left wing of the army. At around 3:30 p.m., Ney ordered a mass cavalry charge against the Anglo-Allied line. Ney's cavalry overran the enemy cannons, but found the infantry formed in cavalry-proof square formations. Ney, without infantry or artillery support, was unable to break the squares. The action earned Ney criticism, and some argue that it led to Napoleon’s defeat at Waterloo.[7] There is still debate as to the responsibility for the cavalry charge and why it was unsupported. Ney’s cavalry also failed to spike enemy cannons (driving an iron spike into the firing hole) while they were under French control (during a cavalry attack the crew of a cannon retreated into the squares for protection, and then re-manned their piece as the horsemen receded). Ney’s cavalry carried equipment needed to spike cannons, and spiking the cannons would likely have made them useless for the rest of the battle. The loss of a large number of cannons would weaken an army and could have caused the Anglo-Allied force to withdraw from the battle.[10] Ney was seen during one of the charges beating his sword against the side of a British cannon in furious frustration. During the battle he had five horses killed under him.[11]

There has been a theory that the logic of his deciding on some of his actions at Waterloo was affected by post-traumatic stress syndrome caused by his experiences in the Russian campaign.[citation needed] 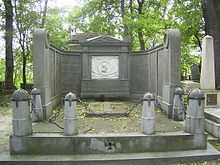 When Napoleon was defeated, dethroned, and exiled for the second time in the summer of 1815, Ney was arrested (on 3 August 1815), and tried (4 December 1815) for treason by the Chamber of Peers. On 6 December 1815 he was condemned, and executed by firing squad in Paris near the Luxembourg Garden on 7 December 1815 – an event that deeply divided the French public. He refused to wear a blindfold and was allowed the right to give the order to fire, reportedly saying:

"Soldiers, when I give the command to fire, fire straight at my heart. Wait for the order. It will be my last to you. I protest against my condemnation. I have fought a hundred battles for France, and not one against her ... Soldiers, Fire!"[12]

Ney's execution was an example intended for Napoleon's other marshals and generals, many of whom were eventually exonerated by the Bourbon monarchy. Ney is buried in Paris at Père Lachaise Cemetery.

One of the more colorful legends of Ney that grew up after his execution was that he had managed to escape to the United States. Proponents of this theory argue that Ney had Masonic ties, including to the Duke of Wellington, who helped him fake his execution and flee abroad. According to this account, the soldiers in the firing squad put blood packets over his heart and then shot blanks at the Marshal. He was then smuggled to the United States and continued his life as a school teacher.

A man called Peter Stuart Ney arrived in the United States in 1816, and later taught school in North and South Carolina, including at Davidson College, where he designed the school seal still in use. He died in 1846, reportedly after uttering the final words, "Bessières is dead; the Old Guard is dead; now, please, let me die."[13] On his gravestone in Cleveland, North Carolina, at Third Creek Presbyterian Church on Third Creek Church Road, one will find the words "(...) soldier of the French Revolution under Napoleon Bonaparte (...)." The legend gained enough ground for P.S. Ney's grave to be exhumed in 1887 and a plaster cast made of the skull by a local doctor, though it was subsequently lost. In 1936, a letter sent to TIME magazine from a Charles W. Allison from Charlotte, North Carolina, claimed that the skull had been found in the doctor's family attic by his daughter. This skull, he reported, "shows evidence of having been scarred by bullets and swords".[14]

Another legend has Michael Rudolph, a Continental Army officer in the American Revolutionary War, making his way to France after his forced resignation in 1793 and eventually becoming Ney.[15]

Ney and his wife had four sons:[citation needed]