Manchester Art Gallery is a publicly-owned art gallery in Manchester, England. It was formerly known as Manchester City Art Gallery. The gallery was opened in 1824 and today occupies three buildings, the oldest of which - designed by Sir Charles Barry - is Grade I listed[1] and was originally home to the Royal Manchester Institution. The gallery was extended by Hopkins Architects in 2002 to take in the Manchester Athenaeum, designed in the Palazzo style by Barry in 1826. The gallery is free to enter and houses the civic art collection, which includes works of local and international significance.

The two-storey gallery, designed by Barry, is built in rusticated ashlar to a rectangular in plan on a raised plinth. The roof is hidden by a continuous dentilled cornice and plain parapet. Its eleven-bay facade has two three-bay side ranges and a central five-bay pedimented projecting portico with six Ionic columns. Set back behind the parapet is an attic with small windows that forms a lantern above the entrance hall.[1] 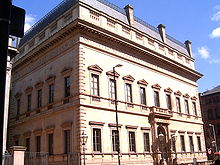 The Manchester Art Gallery is strong in its representation of the English school, with works by Thomas Gainsborough and the Pre-Raphaelite Brotherhood.

The gallery houses several works by the French impressionist Pierre Adolphe Valette who painted and taught in Manchester in the early years of the 20th century and some of his scenes of foggy Manchester streets and canals are displayed. A Cézanne hangs in the same room, showing the similarity in treatment and subject between his misty French river bridge and Valette's bridge in a pre-Clean Air Act Mancunian fog. L. S. Lowry was one of Valette's students and the influence on Lowry of impressionism can be seen at the gallery, where paintings by the two artists hang together.

The museum houses The Picnic (1908), a work by the British Impressionist painter Wynford Dewhurst, who was born in Manchester.

As well as paintings, the museum holds collections of glass, silverware and furniture – including two pieces by the Victorian reformist architect and designer William Burges. 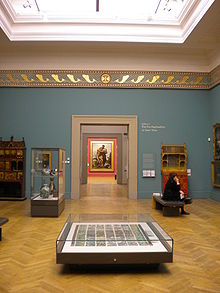 The Good Samaritan by G F Watts framed by doorways 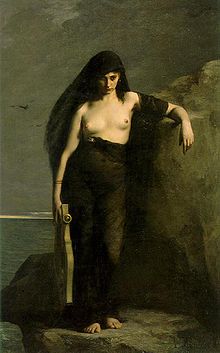 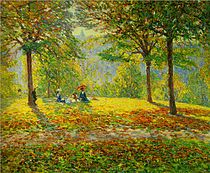