Guillaume-Chrétien de Lamoignon de Malesherbes (6 December 1721 – 23 April 1794), often referred to as Malesherbes or Lamoignon-Malesherbes, was a French statesman, minister, and afterwards counsel for the defence of Louis XVI.

Born at Paris from a famous legal family, he was educated for the legal profession. The young lawyer soon proved his intellectual capacity, when he was appointed president of the cour des aides in the parlement of Paris in 1750 on the promotion of his father, Guillaume de Lamoignon de Blancmesnil, to be chancellor. One of the chancellor's duties was to control the press, and this duty was entrusted to Malesherbes by his father during his eighteen years of office, and brought him into connection with the public far more than his judicial functions. To carry it out efficiently he kept in communication with the literary leaders of Paris, and especially with Diderot, and Friedrich Melchior, baron von Grimm even goes so far as to say that "without the assistance of Malesherbes the Encyclopédie would probably never have been published".

In 1771 he was called to become involved in in politics; the parlements of France had been dissolved, and a new method of administering justice devised by Maupeou, which was in itself commendable as tending to the better and quicker administration of justice, but pernicious as exhibiting a tendency to over-centralization, and as abolishing the hereditary "nobility of the robe", which, with all its faults, had from its nature preserved some independence, and been a check on the royal power. Malesherbes presented a strong remonstrance against the new system, and was at once banished to his country seat at Malesherbes,[1] to be recalled, however, with the old parlement on the accession of Louis XVI, and to be made minister of the maison du roi in 1775.

He held office only nine months, during which, however, he directed his attention to the police of the kingdom, which came under his department, and did much to check the odious practice of issuing lettres de cachet. The protest of the cour des aides in 1775 (Les Remontrances) is one of the most important documents of ancien régime France. It gives a complete survey of the corrupt and inefficient administration, and presented the king with most outspoken criticism. 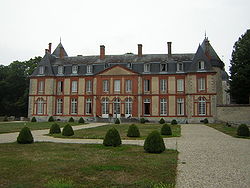 On retiring from the ministry with Turgot in 1776, he betook himself entirely to a happy country and domestic life and travelled through Switzerland, Germany and the Netherlands. An essay on Protestant marriages (1787) did much to procure for them the civil recognition in France. He had always been an enthusiastic botanist; his avenue at Malesherbes[2] was world famous; he had written against Buffon on behalf of the botanists whom Buffon had attacked, and had been elected a member of the Académie des sciences as far back as 1750. He was now elected a member of the Académie française, and everything seemed to promise a quiet and peaceful old age spent in the bosom of his family and occupied with scientific and literary pursuits, when the king in his difficulties wished for the support of his name, and summoned him back to the ministry in 1787.

On 17 April, the King read a speech, written by Lamoignon's cousin Chrétien François de Lamoignon, that spoke of judicial reforms of 'breathtaking sweep and boldness'.[3] The main aim of the reforms was to undermine the power of the Parlement in favour of government-controlled grands bailliages and create an 'enlightened justice'.[3] But, in fact, the people of France reacted angrily - considering Lamoignon's policies an extension of governmental despotism - causing many of the provincial intendants to flee:

In the Breton city of Rennes, the intendant, Bertrand de Moleville, barely escaped being stoned. In early June, when the Parlementaires were required to leave by lettres de cachet, it was the intendant, not the magistrates, who beat a hasty retreat. It took an investment of some eight thousand troops in the city before the situation was calmed in July.[4]

Lamoignon-Malesherbes held office but a short time, but returned to his country life this time with a feeling of insecurity and disquiet, and, as the troubles increased, retired to Malesherbes.[5]

Nevertheless, in December 1792, in spite of the fair excuse his old age and long retirement would have given him, he voluntarily left his asylum and undertook, with François Tronchet and Raymond Desèze, the defence of the king before the Convention, and it was his painful task to break the news of his condemnation to the king. After this effort he returned once more to the country, but in December 1793 he was arrested with his daughter, his son-in-law M. de Rosanbo, and his grandchildren, imprisoned in the Prison Port-Libre, and on the 23 April 1794 he was guillotined, after having seen all whom he loved in the world executed before his eyes for their relationship to him.

The 1911 Encyclopædia Britannica writes of him

Malesherbes is one of the sweetest characters of the 18th century; though no man of action, hardly a man of the world, by his charity and unfeigned goodness he became one of the most popular men in France, and it was an act of truest self-devotion in him to sacrifice himself for a king who had done little or nothing for him.

He was the great-grandfather of Alexis de Tocqueville.