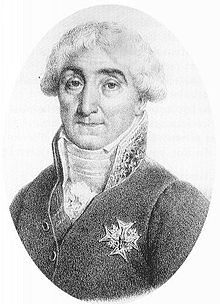 Raymond Romain, Comte de Sèze or Desèze (September 26, 1750 – May 2, 1828) was a French advocate. Together with François Tronchet and Malesherbes, he defended Louis XVI, when the king was brought before the Convention for trial.

de Sèze was born in Bordeaux, Aquitaine, and studied in the famous law school of that city. He gained a reputation for remarkable passion and persuasivness, and came to prominence in 1789 when he defended the Baron de Bensenval against charges of high treason. When, at forty-four, he was called out of retirement to aid the last push of the kings defence, he was considered one of the best lawyers in the kingdom. Though he had to prepare his defence arguments in a short amount of time, his brilliance shone through in a first draft that, although moving, Louis rejected as too rhetorical, saying, "I do not want to play on their (the Convention's) feelings". When the time for the real defence came, despite having had no sleep for over four days, he pled the king's case for three hours, arguing eloquently yet discreetly that the revolution spare his life. Beginning with a description of why the charges were invalid (under the terms of the constitution of 1791 Louis, as king, was immune from prosecution), he attacked the right of Convention to stand as judge and jury. Finally, he moved to a rejection of the charges in the acte enonciatif drawn up by the constitution charge by charge, with a royalist history of the revolution, portraying Louis as 'the restorer of French Liberty". He finished, like many of the set-piece speeches of the revolution, with an appeal to history:

Louis ascended the throne at the age of twenty, and at the age of twenty he gave to the throne the example of character. He brought to the throne no wicked weaknesses, no corrupting passions. He was economical, just, severe. He showed himself always the constant friend of the people. The people wanted the abolition of servitude. He began by abolishing it on his own lands. The people asked for reforms in the criminal law... he carried out these reforms. The people wanted liberty: he gave it to them. The people themselves came before him in his sacrifices. Nevertheless, it is in the name of these very people that one today demands... Citizens, I cannot finish... I stop myself before History. think how it will judge your judgement, and that the judgement of him will be judged by the centuries.

Jean-Paul Marat, the démagogue of the sans-culottes, was favourably impressed, and declared: "de Séze read a long speech made with a great deal of art". The Commune, the most violent of the factions at the time, described the speech as "very adroit". Nevertheless, the case was lost, and the king was sent to the guillotine. de Sèze himself was also imprisoned during the revolution, but he managed to elude the scaffold. After release upon the fall of Robespierre, he disappeared from public life, serving neither the Directory nor the Napoleonic government, both of which he saw as illegitimate. Upon the return of the Bourbons he was made a peer, as well as a judge and a member of the French Academy, before dying at the age of seventy eight.