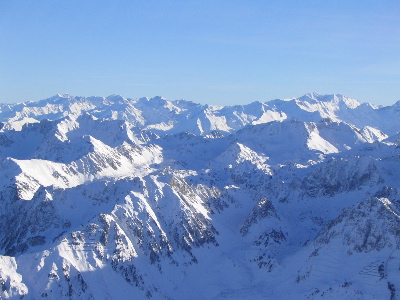 The Pyrenees ( _es. Pirineos; French: "Pyrénées"; Catalan: "Pirineus"; Occitan: "Pirenèus"; Aragonese: "Perinés"; Basque: "Pirinioak") are a range of mountains in southwest that form a between and . They separate the from the rest of continental Europe, and extend for about convert|430|km|mi|0|abbr=on from the (Cap Higuer) to the ().

For the most part, the main crest forms a massive divider between France and Spain, with the tiny country of sandwiched in between. Catalonia and the Basque Country are the human cultural regions that extend on both sides of the mountain range, with a northern and a southern part on each side [Preamble of the [http://www.cg66.fr/culture/patrimoine_catalanite/catalanite/charte_catalan.pdf "Charter of the Catalan Language"] ] [cite book |year=1995|title=Collins Road Atlas of Europe|publisher= Harper Collins|location=London|pages= 28-29|isbn= 0-00-448148-8] .

According to the the Pyrenees are named after Pyrene ("fire" in Greek) the daughter of Bebryx who was supposedly raped by . Terrified by having given birth to a serpent, she fled to the mountains and was either buried or eaten by wild animals. placed the setting of this mythological legend on his map of the as early as 450 BC.

Politically, the are part of the following provinces, from east to west: Girona, Barcelona, Lleida, Huesca, , and .

The independent principality of is sandwiched in the eastern portion of the mountain range between the and .

Physiograpically, the Pyrenees are typically divided into three sections: the Atlantic (or Western), the Central, and the Eastern Pyrenees. Together, they form a distinct physiographic province of the larger Alpine System division.The Central Pyrenees extend westward from the to the pass to the east, and they include the highest summits of this range:
* or "Pic de Néthou" convert|3404|m|ft|0 in the Maladeta ridge,
* convert|3375|m|ft|0,
* or "Monte Perdido" or "Mont Perdut" convert|3355|m|ft|0.

In the Western Pyrenees the average elevation gradually increases from the west to the east, from the near the of the . In the Eastern Pyrenees, with the exception of one break at the eastern extremity of the Pyrénées Ariégeoises, the mean elevation is maintained with remarkable uniformity until a sudden decline occurs in the portion of the chain known as the Albères.

The Pyrenees are older than the : their s were first deposited in coastal basins during the and eras. Between 100 and 150 million years ago, during the Lower period, the Bay of Biscay fanned out, pushing present-day Spain against France and putting large layers of in a vise grip. The intense pressure and uplifting of the Earth's crust first affected the eastern part and stretched progressively to the entire chain, culminating in the epoch.

The eastern part of the Pyrenees consists largely of and ose rocks, while in the western part the granite peaks are flanked by layers of . The massive and unworn character of the chain comes from its abundance of , which is particularly resistant to , as well as weak glacial development.

Conspicuous features of Pyrenean scenery are:
* the absence of great s, such as those that fill the lateral valleys of the Alps
* the rarity and great elevation of passes
* the large number of the mountain torrents locally called "gaves", which often form lofty s, surpassed in Europe only by those of
* the frequency with which the upper end of a valley assumes the form of a semicircle of precipitous cliffs, called a .

The highest is that of Gavarnie (462 m or 1,515 ft), at the head of the ; the , in the same valley, is perhaps the most famous example of the "cirque" formation. Low passes are lacking, and the principal roads and the railroads between France and Spain run only in the lowlands at the western and eastern ends of the Pyrenees, near sea level. Between the two ends of the range, the only two passes worth mentionings are the , between the valley of the Têt and the valley of the Segre, and the or , where there were old s, but apparently, no modern highways.

A notable visual feature of this is , a gap in the ridge line, which in legands was created by .

The metallic s of the Pyrenees are not in general of much importance now, though there were mines at in Ariège and at the foot of in long ago. deposits capable of being profitably worked are situated chiefly on the Spanish slopes, but the French side has beds of . The open pit of Trimoun (Ariège) is one of the greatest sources of in Europe.

s are abundant and remarkable, and especially noteworthy are the s, of which the Alps are very deficient. The hot springs, among which those of , , and may be mentioned, are sulphurous and mostly situated high, near the contact of the granite with the stratified rocks. The lower springs, such as those of (), () and (Aude), are mostly selenitic and not very warm.

This all leads to a marked contrast between different sections of the mountain range in more than one respect. Some s are found in the western and especially the snowy central Pyrenees, but the eastern Pyrenees are without any glaciers - with the quantity of snow falling there being insufficient to cause their development. The glaciers are confined to the northern slopes of the central Pyrenees, and do not descend, like those of the Alps, far down into the valleys, but have their greatest lengths along the direction of the mountain chain. They form, in fact, in a narrow zone near the crest of the highest mountains. Here, as in the other great mountain ranges of central Europe, there is great evidence of a much wider extension of the glaciers during the s. The case of the glacier in the valley of Argelbs in the "département" of Hautes-Pyrénées is the best-known instance.

The snow-line varies in different parts of the Pyrenees from about 2,700 to 2,800 meters above sea-level.

A still more marked effect of the preponderance of rainfall in the western half of the chain is seen in the vegetation. The lower mountains in the extreme west are wooded, but the extent of forest declines eastwards, and the eastern Pyrenees are peculiarly wild and barren, all the more since it is in this part of the chain that granitic masses prevail. There is a change, moreover, in the composition of the flora in passing from west to east. In the west the flora resembles that of central Europe, while in the east it is distinctly Mediterranean in character, though the difference of latitude is only about 1°, on both sides of the chain from the centre whence the Corbières stretch north-eastwards towards the central plateau of France. The Pyrenees are relatively as rich in endemic species as the Alps, and among the most remarkable instances of that endemism is the occurrence of the monotypic genus "" (family ), only on a high alpine pass between the and . The genus most abundantly represented in the range is that of the s, several species of which are endemic here.

The mysteriously became extinct in January 2000; the native Pyrenean was hunted to near-extinction in the 1990s, but it was re-introduced in 1996 when three bears were brought from . The bear population has bred successfully, and there are now believed to be about 15 brown bears in the central region around Fos, but only four native ones are still living in Aspe valley.

In their the Pyrenees present some striking instances of . The is found only in some of the streams of the northern slopes of these mountains, but the only other member of this genus are confined to the rivers of the in southern . The Pyrenean euprocte (""), an endemic relative of the , also lives in streams and lakes located at high altitudes. Among the other peculiarities of the Pyrenean fauna are blind insects in the s of Ariège, the principal genera of which are "" and "".

The ethnology, , institutions and history of the Pyrenean region form an interesting study: see ; ; ; Basque Country; ; ; ; . For their history, see also , .

Languages spoken in the area are, notably, Spanish, French, Catalan (in and ), and the . Also spoken, in a minor extent, are the (the and dialects in France and the Aranese dialect in the ), and Aragonese.

Both sides of the Pyrenees are popular spots for winter sports such as and . The Pyreenees are also a good place for European and North African athletes to do high-altitude training in the summertime, such as by and cross-country running.

In the summer and the autumn, the Pyrenees are usually featured in two of cycling's epic grand tours, the held annually in July and the held in September. The stages held in the Pyrenees are often crucial legs of both tours, drawing hundreds of thousands of spectators to the region, too.

Three main s run the length of the mountain range; the GR 10 across the northern slopes, the GR 11 across the southern slopes, and the HRP which traverses peaks and ridges along a high altitude route. In addition, there are numerous marked and unmarked trails throughout the region.

"" is a dog- competition held in the Pyrenees.