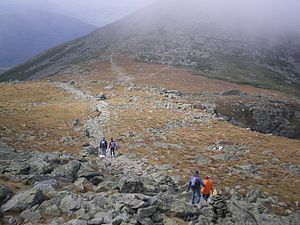 The saddle between Mount Washington and Mount Clay. 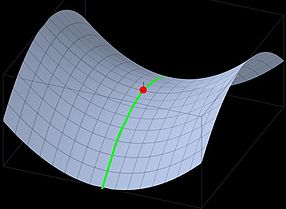 On this topological saddle surface a red dot marks the saddle point and a green line shows the route of steepest descent. 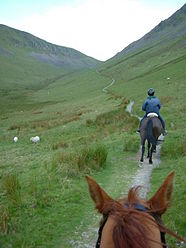 A photo of the approach to the same pass as in the above map (looking from the north-northeast).

A mountain pass (also gap, notch, col, saddle, hause, bwlch (Welsh), brennig or bealach (Gaelic)) is a route through a mountain range or over a ridge. If following the lowest possible route, a pass is locally the highest point on that route. Since many of the world's mountain ranges have presented formidable barriers to travel, passes have been important since before recorded history, and have played a key role in trade, war, and migration.

Mountain passes are analogous to the mathematical concept of a topological saddle surface, with a saddle point marking the highest point between two valleys and the lowest point along a ridge.[1][2] On a topographic map, passes are characterized by contour lines with an hourglass shape, which indicates a low spot between two higher points.[3]

Passes are often found just above the source of a river, constituting a sort of "bridge" over to the headwaters of a different river. Passes may be very short, consisting of steep slopes to the top of the pass, or valleys of many kilometres, whose highest point is only identifiable by surveying.

Roads have long been built, and more recently railways, through passes. Some high and rugged passes may have tunnels bored underneath to allow faster traffic flow throughout the year.

The top of a pass is frequently the only flat ground in the area, a high vantage point, so it is often a preferred site for buildings. For countries whose borders are delimited by a mountain range, the pass is typically part of the border, and the facilities likely include a border control or customs station, and possibly a military post as well, as relatively few soldiers are required to guard a pass. For passes with roads, it is also customary to have a small roadside sign giving the name of the pass and its elevation above mean sea level. An example of this is Argentina and Chile that share the world's third longest international border, 5,300 kilometres (3,300 mi) long, running from north to the south through the Andes mountains, having a total of 42 mountain passes between them.[4] [5]

As well as offering relatively easy travel between valleys, passes also provide a route between two mountain tops with a minimum of descent. As a result, it is common for tracks to meet at a pass; this often makes them convenient routes even when travelling between a summit and the valley floor.

There are thousands of named passes around the world, some of which are well-known, such as the Great St. Bernard Pass at 2,473 metres (8,114 ft) in the Alps, the Khyber Pass at 1,027 metres (3,369 ft) between Afghanistan and Pakistan, and the Khardung La at 5,359 metres (17,582 ft) in Jammu and Kashmir, India. The Marsimik La at 5,590 metres (18,340 ft) is a lesser-known pass; it is one of the world's highest motorable passes and lies in India, on the northern-most tip of the Changthang Plateau, near the Chinese border.

There are many words for pass in the English-speaking world. In the United States, pass is very common in the West, the word gap is common in the southern Appalachians, notch in parts of New England, and saddle in northern Idaho. Scotland has the Gaelic term bealach (anglicised "Balloch"). In the Lake District of north west England, the term hause is often used, although the term pass is also common—one distinction is that a pass can refer to a route, as well as the highest part thereof, while a hause is simply that highest part, often flattened somewhat into a high level plateau.