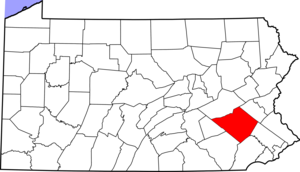 Reading (pronEng|ˈrɛdɪŋ) is the county seat of and the center of the . As of 2005, the city had a population of 83,463, making it the fifth largest city in Pennsylvania after Philadelphia, Pittsburgh, Allentown, and Erie, and the sixth largest municipality after Upper Darby Township.

Overlooking the city on Mount Penn is Reading's symbol, a Japanese-style visible from everywhere in town and referred to locally as "the Pagoda." It was built in 1908 as a hotel and restaurant, but was never used for that purpose. It remains a tourist attraction. In 2007, plans were announced to renovate the area surrounding the Pagoda. The vision is to include walking paths and, possibly, a new mountaintop restaurant.

Duryea Drive, which ascends Mount Penn in a series of sharp bends, was a testing place for early automobiles and was named for .

The city lent its name to the now-defunct , which brought anthracite coal from the Pennsylvania to cities along the . The is one of the four railroad properties in the classic English-language version of the Monopoly board game.

During the general decline of heavy manufacturing, Reading was one of the first localities where outlet shopping became a tourist industry. It has been known as "The Pretzel City" because of numerous local bakeries. It is also known as "Baseballtown," after the trademarked this moniker to market Reading's rich history. Legendary left-handed pitcher Ty Sofflet led Reading to several fast-pitch softball victories in the mid-1970's [Sports Illustrated, May 28, 1979] .

The city is host to numerous professional athletes. Among the athletes native to the Reading are , , and forward .

The book and movie "" took place in Reading. It was written by who was born in nearby Shillington. He fictionalized the name of Reading to "Brewer".

The , something more than a collection of rowhouses, factories, warehouses, and railroad tracks, was captured by watercolorist Matthew Daub from the mid-1990's. [Exhibit Catalog: In The Shadow of Industry, Watercolors and Drawings of Eastern Pennslyvania, Robert P. Metzger, PhD., Reading Public Museum, 2001] Filmmakers Gary Adelstein, Costa Mantis, and Jerry Orr's "Reading 1974: Portrait of a City", relying heavily on montage, is a cultural time capsule.

During the , Reading was a military base for a chain of forts along the Blue Mountains. Meanwhile the region was being settled by emigrants from southern and western . The Pennsylvanian German dialect was spoken in Reading well into the 1950's and later.

By the time of the , the area's industry had a total production which exceeded England's, an output that would help supply 's troops with cannons, rifles, and ammunition in the Revolutionary War. During the early period of the conflict, Reading was a depot again for military supply. Hessian prisoners from the were also detained here.

The (P&R) was incorporated in . During the Depression of 1877, a statewide railroad strike over delayed wages led to a violent protest and clash with the National Guard in which six Reading men were killed. [Zinn, Howard. "A People's History of the United States 1492-Present" (New York: HarperPerennial, 1995), p. 243.] After over a century of prosperity, the Reading Company was forced to file for bankruptcy protection in 1971. The bankruptcy was a result of dwindling coal shipping revenues and strict government regulations that denied railroads the ability to set competitive prices, required high taxes, and forced the railroads to continue to operate money-losing lines. On April 1, 1976, the Reading Company sold its current railroad interests to the newly formed Consolidated Railroad Corporation ().

In 1927, Reading elected J. Henry Stump as its first and only Socialist mayor. Stump was re-elected on two other occasions, and during his first term, the entire city government was Socialist. Many tangible improvements were made during his tenure. [ [http://www.berkshistory.org/articles/stump.html# Historical Review of Berks County, Summer, 1958] ]

Reading experienced continuous growth until the 1930s, when its population reached nearly 120,000. From the 1940s to the 1970s, however, the city saw a sharp downturn in prosperity, largely owing to the decline of the heavy industry and railroads, on which Reading had been built, and a general flight to the suburbs.

In , caused extensive flooding in the city, not the last time the lower precincts of Reading were inundated by the as a similar, though not as devastating, flood occurred during June 2006.

The Reading Glove and Mitten Manufacturing Company founded in 1899 just outside Reading city limits in West Reading and Wyomissing boroughs changed its name to Vanity Fair in 1911 and is now the major clothing manufacturer In the early 1970s, the original factories were developed to create the , the first outlet mall in the United States. The mall is so successful that it draws hundreds of thousands of tourists to Reading every year.

The 2000 census showed that Reading's population decline had begun to reverse itself. This was attributed to an influx of residents from , as well as from the extension of from 's northwest suburbs.

Like all metropolitan areas, Reading has its share of obstacles to overcome, namely crime. [ [http://www.morganquitno.com/xcit06pop.htm#METRO City Crime Rankings by Population Group ] ] However, new crime fighting strategies appear to be having an impact, as in 2006 the city dropped in the rankings of dangerous cities, and then again in 2007.

In December 2007, the NBC Today Show featured Reading as one of the "Top Up and Coming Neighborhoods" in the United States. [ [http://video.msn.com/video.aspx?mkt=en-us MSN Video ] ] The researchers who conducted the study were looking for undiscovered areas that are 'Up and Coming.' In this comprehensive study, professionals were looking for areas of big change, renovations, cleanups of parks, waterfronts, and warehouses. The criteria for the study of these neighborhoods was hip factor, nightlife, creative types, new cars, and ladies sitting on park benches.

The , the montaine formation streching north into New Jersey, has come to be associated with naturally-occurring Radon gas, however homes in Reading proper are not particularly affected.

Public transit in Reading and its surrounding communities has been provided since 1973 by BARTA, the Berks Area Reading Transit Authority. BARTA operates a fleet of 61 buses serving 21 routes, mostly originating at the BARTA Transportation Center in Downtown Reading.

A number of federal and state highways allow entry to and egress from Reading. U.S. Route 222 Business is designated as Lancaster Avenue, Bingaman Street, South 4th Street, and 5th Street. U.S. Route 422 Business is designated as Penn Street, Cherry Street, Franklin Street, and Perkiomen Avenue. , the major east-west artery, circles the western edge of the city and is known locally as The West Shore Bypass. PA Route 12 is known as the Warren Street Bypass, as it bypasses the city to the north. PA Route 10 is known as Morgantown Road.

The most congested intersection in Reading and all of is in the Millmont section of the city, where U.S. Route 222 Business, U.S. Route 422, and PA Route 10 all converge.

Reading and the surrounding area is serviced by the , a general aviation airfield. Scheduled commercial airline service to Reading ended in 2004, though Reading is a short drive from , , and .

In the late 1990s and up to 2003, Philadelphia-based , in cooperation with Reading-based funded a study called the Schuylkill Valley Metro which included plans to extend both sides of SEPTA's R6 regional railroad line to , Reading, and , Pennsylvania. The project suffered a major setback when it was rejected by the Federal Transit Administration New Starts program, which cited doubts about the ridership projections and financing assumptions used by the study. With the recent surge in gasoline prices and ever-increasing traffic, the planning commissions of Montgomery County and have teamed to study the feasibility of a simple extension of the R6 from Wyomissing to Norristown, PA. Options to be studied include complete electrification of the line, diesel service (with a cross-platform change in Norristown), or an electric-diesel hybrid. The study had been expected to be completed sometime during the summer of 2008 [http://www.r6extension.com] .

In recent years, Reading, like many other cities in the , has experienced an influx in immigration and migration as has made traditional points of entry in the prohibitively expensive. In 2000, 23.46% of Reading residents were of Puerto Rican ancestry. The city also contains sizable populations of Dominican and Mexican ancestry.

In 2000, the Reading metropolitan statistical area was the second most segregated place for s in the United States, behind only the area. Only 2.1% of the rest of Berks County is Hispanic or Latino, while this ethnic group is highly concentrated in certain city neighborhoods. [http://www.bccf.org/ICGR/StrategyBoard3-5-04vF.ppt]

Reading is also seeing some migration of college-educated individuals fleeing high housing costs in the , although this number is dwarfed by the number settling in the city's eastern suburbs such as Exeter Township, closer to the border with Montgomery County.

The Reading School District provides elementary and middle schools for the city's children. Numerous are also available. It is possible to get a complete education, from Kindergarten through college, on one street, 13th.

The is an art, science, and history museum in Reading.