Memorial Day
This article is about the American holiday. For other uses, see Memorial Day (disambiguation).

Memorial Day is a United States federal holiday observed on the last Monday of May.[1] Formerly known as Decoration Day, it originated among black and Northern white communities after the American Civil War to commemorate the fallen Union soldiers of the Civil War. (Southern ladies organizations and southern schoolchildren had decorated Confederate graves in Richmond and other cities during the Civil War, but each region had its own date. Most dates were in May.) By the 20th century Memorial Day had been extended to honor all Americans who have died in all wars. Memorial Day is a day of remembering the men and women who died while serving in the United States Armed Forces.[2] As a marker it typically marks the start of the summer vacation season, while Labor Day marks its end.

By the early 20th century, Memorial Day was an occasion for more general expressions of memory, as people visited the graves of their deceased relatives, whether they had served in the military or not. It also became a long weekend increasingly devoted to shopping, family gatherings, fireworks, trips to the beach, and national media events such as the Indianapolis 500 auto race, held since 1911 on the Sunday of Memorial Day weekend.[3] 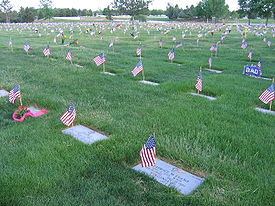 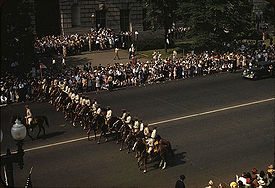 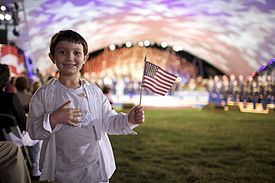 The first known observance of a Memorial Day-type observance was in Charleston, South Carolina on May 1, 1865; freedmen (freed slaves) commemorated and celebrated at the Washington Race Course, today the location of Hampton Park. 257 Union soldiers had been buried there, and the freedmen labeled the gravesite "Martyrs of the Race Course".[4]

In a recent lecture, David Blight, a history professor at Yale University, told the story of the first Memorial Day:

"During the last months of the [American Civil] war the Confederate Army turned the Washington race course [in Charleston, South Carolina] into an open air prison. And in that open air prison in the in-field of the horse track about 260 odd Union soldiers had died of disease and exposure. And they were buried in unmarked graves behind the grandstand of the race track. And by the way, there was no more important and symbolic site in low country planter slave holding life than their race track. The black folks of Charleston got organized. They knew about all this. They went to the site. They reinterred the buried men. They couldn’t mark them with names. They didn’t have any names. Then they made them proper graves. They built a fence around the cemetery. And over an archway they painted the inscription: “Martyrs of the Race Course.” And then on May 1, 1865 they held a parade of 10,000 people on the race track led by 3,000 black children carrying arms full of roses singing John Brown’s Body. As many as could fit got into the gravesite. Five black preachers read from scripture. A children’s choir sang the national anthem, America the Beautiful[sic][5] , and several spirituals. And then they broke from that and did what essentially you or I do on Memorial Day: They ran races, listened to speeches, the troops marched back and forth, and they held picnics. This was the first Memorial Day. African-Americans invented Memorial Day in Charleston, South Carolina. What you have there is black Americans recently freed from slavery announcing to the world with their flowers, their feet, and their songs what the War had been about. What they basically were creating was the Independence Day of a Second American Revolution.”[6]

The friendship between General John Murray, a distinguished citizen of Waterloo, New York, and General John A. Logan, who helped bring attention to the event nationwide, was likely a factor in the holiday's growth. On May 5, 1868, in his capacity as commander-in-chief of the Grand Army of the Republic - the organization for Northern Civil War veterans - Logan issued a proclamation that "Decoration Day" should be observed nationwide.[7] It was observed for the first time on May 30 of the same year; the date was chosen because it was not the anniversary of a battle.

There were events in 183 cemeteries in 27 states in 1868, and 336 in 1869. The northern states quickly adopted the holiday; Michigan made "Decoration Day" an official state holiday in 1871 and by 1890 every northern state followed suit. The ceremonies were sponsored by the Women's Relief Corps, which had 100,000 members. By 1870, the remains of nearly 300,000 Union dead had been buried in 73 national cemeteries, located mostly in the South, near the battlefields. The most famous are Gettysburg National Cemetery in Pennsylvania and Arlington National Cemetery, near Washington.

The Memorial Day speech became an occasion for Veterans, Politicians and Ministers to commemorate the War - and at first to rehash the atrocities of the enemy. They mixed religion and celebratory nationalism and provided a means for the people to make sense of their history in terms of sacrifice for a better nation, one closer to God. People of all religious beliefs joined together, and the point was often made that the German and Irish soldiers had become true Americans in the "baptism of blood" on the battlefield. By the end of the 1870s the rancor was gone and the speeches praised the brave soldiers both Blue and Gray. By the 1950s, the theme was American exceptionalism and duty to uphold freedom in the world.

Ironton, Ohio, lays claim to the nation's oldest continuously running Memorial Day parade. Its first parade was held May 5, 1868, and the town has held it every year since. According to CBS news, the Memorial Day parade in Doylestown, Pennsylvania, predates Ironton's by one year. [8]

Beginning in 1866, the Southern states had their own Memorial Days, ranging from April 26 to mid-June. The birthday of Confederate President Jefferson Davis, June 3, became a state holiday in 10 states by 1916. Across the South, associations were founded after the War to establish and care for permanent cemeteries for Confederate soldiers, organize commemorative ceremonies and sponsor impressive monuments as a permanent way of remembering the Confederate cause and tradition. Women provided the leadership in these associations, paving the way to establish themselves as capable of public leadership. The most important was the United Daughters of the Confederacy, which grew from 20,000 members in 1900 to nearly 100,000 women by 1920.

The earliest Confederate Memorial Day celebrations were simple, somber occasions for veterans and their families to honor the day and attend to local cemeteries. Around 1890, there was a shift from this consolatory emphasis on honoring specific soldiers to public commemoration of the Confederate cause. Changes in the ceremony's hymns and speeches reflect an evolution of the ritual into a symbol of cultural renewal and conservatism in the South. By 1913, however, the theme of American nationalism shared equal time with the Lost Cause.

Women in Columbus, Mississippi in 1866 laid flowers at the graves of both the Union and Confederate casualties buried in its cemetery.[9]

The ceremonies and Memorial Day address at Gettysburg National Park were nationally famous, starting in 1868. In July 1913, veterans of the United States and Confederate armies gathered in Gettysburg to commemorate the fifty-year anniversary of one of the Civil War's bloodiest and most famous battle. The four-day "Blue-Gray Reunion" featured parades, re-enactments, and speeches from a host of dignitaries, including President Woodrow Wilson, the first Southerner in the White House since the War. Congressman James Heflin of Alabama was given the honor of the main address. Heflin was a noted orator; two of his best-known speeches were an endorsement of the Lincoln Memorial and his call to make Mother's Day a holiday, but his choice as Memorial Day speaker was met with criticism. He was opposed for his racism, but his speech was moderate, stressing national unity and goodwill, and the newspapers, including those who opposed his invitation to speak, praised him.

The preferred name for the holiday gradually changed from "Decoration Day" to "Memorial Day", which was first used in 1882. It did not become more common until after World War II, and was not declared the official name by Federal law until 1967. On June 28, 1968, the Congress passed the Uniform Holidays Bill, which moved four holidays, including Memorial Day, from their traditional dates to a specified Monday in order to create a convenient three-day weekend. The change moved Memorial Day from its traditional May 30 date to the last Monday in May. The law took effect at the federal level in 1971. The Veterans of Foreign Wars (VFW) and Sons of Union Veterans of the Civil War (SUVCW) advocate returning to the original date, although the significance of the date is tenuous. The VFW stated in a 2002 Memorial Day Address:

Changing the date merely to create three-day weekends has undermined the very meaning of the day. No doubt, this has contributed a lot to the general public's nonchalant observance of Memorial Day.[10]

Since 1987, Hawaii's Senator Daniel Inouye, a World War II veteran, has introduced a measure to return Memorial Day to its traditional date.[11]

After some initial confusion and unwillingness to comply, all 50 states adopted Congress's change of date within a few years. Memorial Day endures as a holiday which most businesses observe because it marks the unofficial beginning of summer.

Many people observe Memorial Day by visiting cemeteries and memorials. A national moment of remembrance takes place at 3 pm local time. Another tradition is to fly the flag of the United States at half-staff from dawn until noon local time. Volunteers often place American flags on each grave site at National Cemeteries.

For many Americans, the central event is attending one of the thousands of parades held on Memorial Day in large and small cities all over the country. Most of these feature marching bands and an overall military theme with the National Guard and other servicemen participating along with veterans and military vehicles from various wars.

Because Memorial Day is generally associated with the start of the summer season, it's common tradition to inaugurate the outdoor cooking season on Memorial Day with a barbecue.[12]

The National Memorial Day Concert takes place on the west lawn of the United States Capitol. The concert is broadcast on PBS and NPR. Music is performed, and respect is paid to the men and women who gave their lives for their country.

Sociologists, following the lead of Robert Bellah, often make the argument that America has a secular "civil religion" - one with no association with any religious denomination or viewpoint - that has incorporated Memorial Day as a sacred event. The obligation both collective and individual to carry out God's will on earth is a theme that lies deep in the American tradition. With the Civil War, a new theme of death, sacrifice and rebirth enters the civil religion. Memorial Day gave ritual expression to these themes, integrating the local community into a sense of nationalism. The American civil religion in contrast to that of France was never anticlerical or militantly secular; in contrast to Britain it was not tied to a specific denomination like the Church of England. Instead the Americans borrowed selectively from different religious traditions in such a way that the average American saw no conflict between the two, thus mobilizing deep levels of personal motivation for the attainment of national goals.[13]

In literature and music

Charles Ives's symphonic poem Decoration Day depicted the holiday as he experienced it in his childhood, with his father's band leading the way to the town cemetery, the playing of "Taps" on a trumpet, and a livelier march tune on the way back to the town. It is frequently played with three other Ives works based on holidays as the second movement of A New England Holidays Symphony.