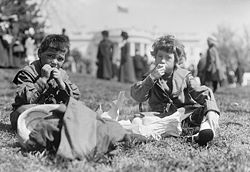 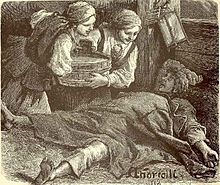 Easter Monday is the day after Easter Sunday and is celebrated as a holiday in some largely Christian cultures, especially Roman Catholic and Eastern Orthodox cultures. Easter Monday in the Roman Catholic liturgical calendar is the second day of the octave of Easter Week.

Formerly, the post-Easter festivities involved a week of secular celebration, but this was reduced to one day in the 19th century. Events include egg rolling competitions and, in predominantly Roman Catholic countries, dousing other people with water which traditionally had been blessed with holy water the day before at Easter Sunday Mass and carried home to bless the house and food.

In the Eastern Orthodox Church and those Eastern Catholic Churches which follow the Byzantine Rite, Easter Monday is known as Bright Monday or Renewal Monday, and is the second day of Bright Week. The services are exactly the same as on Pascha (Easter Sunday), except that the hymns from the Octoechos are in Tone Two. It is customary to have a Crucession (procession headed by a cross) either after Paschal Matins or after the Paschal Divine Liturgy. It is customarily a day for visiting family and friends. Easter Monday is also the day when the feast day of St. George is celebrated, in years when St George's Day (April 23) falls during Holy Week or on Easter Sunday.

In Australia, Easter Monday is a public holiday. People enjoy outdoor sporting events, such as the Oakbank Easter Racing Carnival in South Australia, Australian Three Peaks Race in Tasmania as well as the Stawell Gift.

In Egypt, the ancient festival of Sham El Nessim (Arabic: شم النسيم‎, literally meaning "smelling of the breeze") is celebrated on the Coptic (i.e. Eastern) Easter Monday, though the festival dates back to Pharonic times (about 2700 BC). It is celebrated by both Egyptian Christians and Muslims as an Egyptian national holiday rather than as a religious one. Traditional activities include painting eggs, taking meals outdoors, and eating feseekh (fermented mullet). 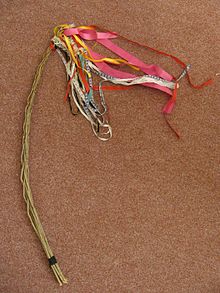 Dyngus Day or Wet Monday (Polish Śmigus-Dyngus or lany poniedziałek) is the name for Easter Monday in Poland. In the Czech Republic it is called velikonoční pondělí or pomlázka. In Slovakia veľkonočný pondelok (Easter Monday) is called Šibačka/Polievačka or Oblievačka. too. In Hungary Locsolkodás. All countries practice a unique custom on this day.

In Poland, Hungary, Slovakia, and the Czech Republic[3] traditionally, early in the morning boys awake girls by pouring a bucket of water on their head and striking them about the legs with long thin twigs or switches made from willow, birch or decorated tree branches; however, the earliest documented[citation needed] records of Dyngus Day in Poland are from the 15th century, almost half a millennium after Poland adopted Christianity.

Benedykt Chmielowski in Nowe Ateny cite after "Carolo Berthold" that this ritual was already in custom in 750, 250 years before Poland officially adopted Christianity. See religious syncretism.

One theory is that Dyngus originates from the baptism on Easter Monday of Mieszko I (Duke of the Polans, c. 935–992) in 966 AD, uniting all of Poland under the banner of Christianity. Dyngus and Śmigus were twin pagan gods; the former representing water and the moist earth (Dyngus from din gus – thin soup or dingen – nature); and the latter representing thunder and lightning (Śmigus from śmigać or to make a whooshing sound). In this theory, the water tradition is the transformation of the pagan water god into the Christian baptism. The custom of pouring water was an ancient spring rite of cleansing, purification, and fertility. It is alleged that the pagan Poles bickered with nature/Dyngus by means of pouring water and switching with willows to make themselves pure and worthy of the coming year. Others have suggested that the striking tradition is the transformation of the ritual "slap" of Christian confirmation. However, still others suggest that the Śmigus tradition is actually simply a youthful recapitulation of a Good Friday Polish tradition, in which parents wake their children with switches from twigs, saying the words of a Lenten prayer "God's wounds" – "Boże rany".

Early, the Dyngus custom was clearly differentiated from śmigus: dyngus was the exchange of gifts (usually eggs, often decorated – pisanka pl. pisanki), under the threat of water splashing if one party did not have any eggs ready, while Śmigus referred to the striking.

Later the focus shifted to the courting aspect of the ritual, and young unmarried girls were the only acceptable targets. A boy would sneak into the bedroom of the girl he fancied and awaken her by drenching her with multiple buckets of water. Politics played an important role in proceedings, and often the boy would get access to the house only by arrangement with the girl's mother.

Throughout the day, girls would find themselves the victims of drenchings and leg-whippings, and a daughter who was not targeted for such activities was generally considered to be unattractive and unmarryable in this very coupling-oriented environment.

Most recently, the tradition has changed to become fully water-focused, and the śmigus part is almost forgotten. It is quite common for girls to attack boys just as fiercely. With much of Poland's population residing in tall apartment buildings, high balconies are favorite hiding places for young people who gleefully empty buckets of water or more recently throw plastic bags or water balloons onto random passers-by.

Another related custom, unique to Poland is that of sprinkling bowls (garce) of ashes on people (starts men on women) or houses, celebrated a few weeks earlier at the "półpoście." This custom is almost forgotten, but still practiced in the area around borders of Mazuria and Masovia.

Though not largely observed in the United States, the day remains informally observed in some areas such as the state of North Dakota, and some cities in New York, Michigan, and Indiana. Easter Monday was a public holiday in North Carolina from 1935 to 1987. Texas and Maryland schools often have two holidays on Good Friday and Easter Monday.

Traditionally Polish areas of the country such as Chicago, and more recently Cleveland,[4] observe Easter Monday as Dyngus Day.[5][6] In the United States, Dyngus Day celebrations are widespread and popular in Buffalo; Wyandotte and Hamtramck in Michigan; South Bend and La Porte in Indiana; and Hanover, New Hampshire. Wet Monday is also celebrated at Jonathan Edwards College, one of the residential colleges at Yale University, when each year the freshman class storms the college with water weapons, where upperclassmen are ready to defend the college and ensure no one goes home dry.[citation needed]

Although Dyngus Day was celebrated in traditional Polish neighborhoods of Buffalo dating back to the 1870s, modern Dyngus Day in Buffalo had its start with the Chopin Singing Society. Judge Ann T. Mikoll and her late husband Theodore V. Mikoll held the first party at the Society's clubrooms in the Buffalo Central Terminal. The Society left the East Side in the 1980s and moved to new clubrooms in nearby Cheektowaga, where the festival attracted a new generation of revelers. In recent years, the focus of Buffalo's Dyngus Day celebration has returned to the Historic Polonia District in the form of large parties at the Buffalo Central Terminal, St. Stanislaus - Bishop & Martyr Church, the Adam Mickiewicz Library and Dramatic Circle, and at many family-owned Polish taverns. The World's First Dyngus Day Parade, inaugurated in 2006, makes its way through the Polonia District from the Broadway Market to Buffalo Central Terminal. In 2008, the parade attracted more than 25,000 people.[7]

In 2006, two-time Grammy Award nominated Polka band Jerry Darlak & the Touch recorded the "Everybody's Polish on Dyngus Day" polka. "The polka is meant to capture the uniqueness of the Buffalo Dyngus Day celebration," explained the song's composer, Ray Barsukiewicz. Lyrics include references to pussy willows, the sprinkling of water, polka dancing and parties that last until daylight. That same year, Lenny Gomulka and the Chicago Push released the "Dyngus Day in Buffalo Polka" to recognize Buffalo's time-honored traditions. Gomulka is regarded as one of the nation's premiere polka stars, having been nominated for 11 Grammy Awards.

In 2007, the world's oldest working fireboat, the Edward M. Cotter, received the honor of being named the "World's Largest Dyngus Day Squirt Gun". "This could explains [sic] why the Cotter is painted red & white," said Marty Biniasz, alluding to the colors of the Polish flag and the Cotter's current livery. "It's only right that The Dyngus Day Capital of the World should have the World's Largest Squirt Gun. We are proud to now make Buffalo's most-loved ship part of our Dyngus Day Buffalo tradition."

Robert F. Kennedy's 1968 appearance was marked by his downtown rally attended by a crowd of over 6,000, his participation in the Dyngus Day parade, and his leading of the crowds at the West Side Democratic Club in the traditional Polish well wishing song Sto Lat (phonetic: 'sto laht') which means "100 years". Indiana was RFK's first primary and first primary victory, which set in motion momentum and victories that would have led to his nomination as the Democratic Party candidate for President had he not been assassinated.[8][9]

Starting in 2004, Rose-Hulman Institute of Technology in Terre Haute, Indiana began celebrating Dyngus Day at the request of South Bend students. The event includes free Polish sausage for students as well as a free concert.[8][9]

Elsewhere in the world

Easter Monday is an official holiday in the following countries (The Eastern Orthodox Church observes Easter on a different date due to use of the Julian Calendar vs. the Gregorian Calendar, which is used in the Western Church to determine the date of Easter each year. Nations on this list indicated as "Eastern Christian" observe Easter according to the Eastern Orthodox calendar, which will differ on most years from the Western observance)