This article is about the island nation in the Caribbean. For other uses, see Montserrat (disambiguation). 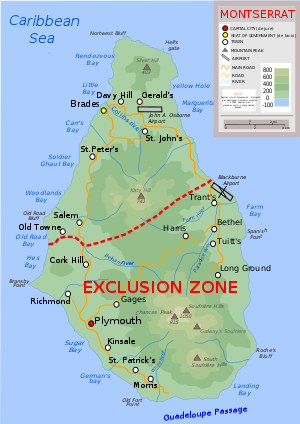 /mɒntsəˈræt/) is a British overseas territory located in the Leeward Islands, part of the chain of islands called the Lesser Antilles in the West Indies. This island measures approximately 16 km (9.9 mi) long and 11 km (6.8 mi) wide, giving 40 kilometres (25 mi) of coastline.[2] On his second voyage to the New World in 1493, Christopher Columbus named the Caribbean island after the mountain of Montserrat located near the city of Barcelona, Spain. Montserrat is nicknamed the Emerald Isle of the Caribbean both for its resemblance to coastal Ireland and for the Irish ancestry of its inhabitants.

Montserrat's Georgian era historic capital city of Plymouth was destroyed and two-thirds of the island's population was forced to flee because of an eruption of the previously dormant Soufriere Hills volcano that began on July 18, 1995.[3] The eruption continues today on a much reduced scale, the damage being confined to the areas around Plymouth, including its docking facilities and the former W. H. Bramble Airport, the remnants of which were buried by flows from volcanic activity on February 11, 2010. An "exclusion zone" extending from the south coast of the island north to parts of the Belham Valley has been imposed because of the size of the existing volcanic dome and the resulting potential for pyroclastic activity. At present visitors are not permitted entry into the exclusion zone, but an impressive view of the destruction of Plymouth can be had from the top of Garibaldi Hill in Isles Bay. Relatively quiet since early 2010, the volcano continues to be closely monitored by the Montserrat Volcano Observatory.

The village of Brades currently serves as the temporary centre of government while construction proceeds on a new town at Little Bay in the north of the island.

Montserrat was populated by Arawak and Carib native peoples when it was claimed by Christopher Columbus on his second voyage in 1493, naming the island Santa María de Montserrat, after the Monastery of Montserrat in northeastern Spain. The island fell under English control in 1632[4] when anti-Catholic violence in Nevis forced a group of Irish, many of whom had been unwillingly transported from Ireland as indentured servants, to settle in Montserrat. A neo-feudal colony developed.[5] The importation of African slaves, common to most Caribbean islands, began early and an economy based on sugar, rum, arrowroot and Sea Island cotton was established using slave labor. By the late 1700s there were many plantations on the island.

In 1782, during the American Revolutionary War, Montserrat was briefly captured by France. It was returned to the United Kingdom under the Treaty of Paris which ended that conflict. A failed slave uprising on March 17, 1768[6] led to the celebration of St Patrick's Day as a public holiday in Montserrat, and festivities held that week celebrate the culture of Montserrat, through songs, dances, and traditional costumes and foods. Slavery was abolished in Montserrat in 1834.

Falling sugar prices during the nineteenth century had an adverse effect on the island's economy, and in 1869 the British philanthropist Joseph Sturge formed the Montserrat Company to buy sugar estates that were no longer economically viable. The company planted lime trees, started the commercial production of lime juice, set up a school, and sold parcels of land to the inhabitants of the island, with the result that much of Montserrat came to be owned by smallholders.[7]

From 1871 to 1958 Montserrat was administered as part of the Federal Colony of the British Leeward Islands, becoming a province of the short-lived West Indies Federation from 1958 to 1962. In 1979, Beatles producer George Martin’s AIR Studios Montserrat opened and the island attracted world-famous musicians who came to record in the peaceful, quiet and lush tropical surroundings of Montserrat.[8] The last decade of the 20th century, however, brought two events which devastated the island.

In the early hours of September 17, 1989 Hurricane Hugo, a Category 4 storm, struck Montserrat with full force producing sustained winds of 140 miles per hour and damaging over 90 percent of the structures on the island. AIR Studios closed, and the tourist economy upon which the island depended was virtually wiped out. Within a few years the island had recovered considerably—only to be struck again by disaster.

Plymouth, the former capital city and major port of Montserrat, July 12, 1997, after pyroclastic flows burned much of what was not covered in ash.

In July 1995, Montserrat's Soufriere Hills volcano, dormant for centuries, rumbled to life and began an eruption which eventually buried the island's capital, Plymouth, in more than 12 metres (39 ft) of mud, destroyed its airport and docking facilities, and rendered the southern half of the island uninhabitable. Following the destruction of Plymouth, more than half of the population left the island due to the economic disruption and lack of housing. After a period of regular eruptive events during the late 1990s, including one on June 25, 1997 in which 19 people died when they were overtaken by a pyroclastic flow, the volcano's activity in recent years has been confined to infrequent ventings of ash, mostly into the uninhabited areas in the south but occasionally extending into the northern and western parts of the island. The southern part of the island has been evacuated and visits are severely restricted.[9]

The most recent period of increased activity at the Soufriere Hills volcano, from November 2009 through February 2010, saw ash venting, a vulcanian explosion which sent pyroclastic flows down several sides of the mountain, and on February 11, 2010 a partial collapse of the lava dome that sent a column of ash more than 20,000 feet (6,100 m) into the air, raining down on several nearby islands including Guadeloupe and Antigua. Since 2010, the volcano has been relatively quiet.[10]

Despite the volcanic activity, much of Montserrat remains lush and green. In February 2005, The Princess Royal officially opened a new airport at Gerald's in the north (renamed the John A. Osborne Airport); As of 2011[update] it handles several flights daily operated by Fly Montserrat Airways. Docking facilities are in place at Little Bay, where a new capital town is being constructed.

The people of Montserrat were granted full residency rights in the United Kingdom in 1998, and citizenship was granted in 2002. 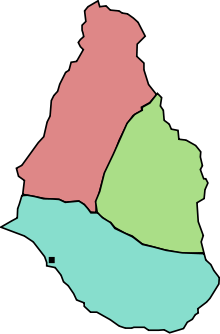 Map of Montserrat's parishes: Saint Peter is shown in pale red, Saint Georges in green and Saint Anthony in blue.

Montserrat is divided into three parishes: 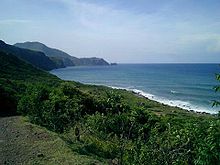 The island of Montserrat is located approximately 480 km (300 mi) east-southeast of Puerto Rico and 48 km (30 mi) southwest of Antigua. It comprises 104 km2 (40 sq mi) but is currently gradually increasing in size owing to the buildup of volcanic deposits on the southeast coast. The island is 16 km (9.9 mi) long and 11 km (6.8 mi) wide, with rock cliffs rising 15 to 30 m (50–100 feet) above the sea and a number of smooth bottomed sandy beaches scattered among coves on the western (Caribbean) side of the island.

Montserrat, like many isolated islands, is home to some exceptionally rare plant and animal species. Work undertaken by the Montserrat National Trust in collaboration with the Royal Botanic Gardens, Kew has centred on the conservation of pribby (Rondeletia buxifolia) in the Centre Hills region. Until 2006, this species was known only from one book about the vegetation of Montserrat.[13] In 2006, conservationists also rescued several plants of the endangered Montserrat orchid (Epidendrum montserratense) from dead trees on the island and installed them in the security of the island’s botanic garden.

Montserrat is known for its coral reefs and its caves along the shore. These caves house many species of bats, and efforts are underway to monitor and protect the ten species of bats from extinction.[14][15]

From 1979 to 1989 Montserrat was home to a branch of George Martin's AIR Studios which made the island popular with working musicians who often went there to record while taking advantage of the island's climate and beautiful surroundings.

Since the devastations of Hurricane Hugo and the eruption of the Soufriere Hills Volcano, the Montserratian economy has been effectively halted. Export businesses currently based in Montserrat deal primarily in the selling and shipping of aggregate for construction. Imports include virtually everything available for sale on the island.

The island's operating budget is largely supplied by the British government and administered through the Department for International Development (DFID) amounting to approximately £25 million per year. Additional amounts are secured through income and property taxes, license and other fees as well as customs duties levied on imported goods.

Note: an estimated 8,000 refugees left the island (primarily to the UK) following the resumption of volcanic activity in July 1995; few have returned. Pre-eruption population was 13,000 in 1994.

Ethnic groups: Black, White, Mulatto, Creole. The island's population is mainly a mix of British, Irish and Africans with other minorities.

See also: Music of Montserrat and Cricket in the West Indies

Saint Patrick's Day is a public holiday in Montserrat.

Montserrat has its own FIFA Affiliated Football Team, and has twice competed in the World Cup qualifiers. A field for the team was built near the airport by FIFA. The Montserrat team are currently tied for 203rd place in the FIFA world rankings with 4 other teams, including American Samoa and San Marino. In 2002, the team competed in a friendly match with the second-lowest-ranked team in FIFA at that time, Bhutan, in The Other Final- the same day as the final of the 2002 World Cup. Bhutan won 4-0.