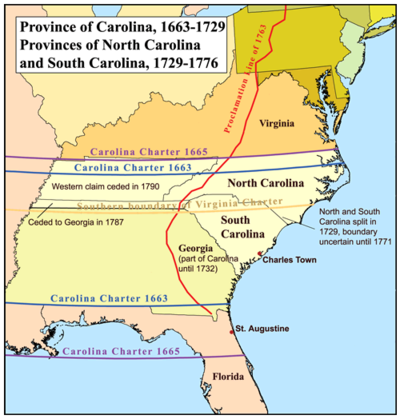 A map of the Province of Carolina.

King Charles II of England granted the Carolina charter in 1663 for lands south of Virginia Colony and north of Spanish Florida. Because the northern half of the colony differed significantly from the southern half, and because transportation and communication between the two settled regions was difficult, starting in 1691 a separate deputy governor was named to administer the northern half of the colony. The division of the colony into North and South was complete by 1712, although the same proprietors continued to control both colonies. A rebellion against the proprietors in South Carolina in 1719 led to the appointment of a royal governor in that colony in 1720, but the proprietors continued to appoint the governor of North Carolina.

In 1729, after nearly a decade-long attempt by the British government to locate and buy out seven of the eight Lords Proprietors, both Carolinas became royal colonies. The remaining one-eighth share of the Province (part of North Carolina known as the Granville District) was retained by members of the Carteret family until 1776; see John Carteret, 2nd Earl Granville.

Two important maps of the province were produced: one by Edward Moseley in 1733, and another by John Collet in 1770. Of the latter, much had been compiled by William Churton prior to his death in 1767. Many of the settlers of the North Carolina colony were poor tobacco farmers who made their living off this single cash crop.