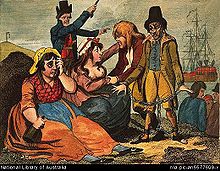 Women in England mourning their lovers who are soon to be transported to Botany Bay, 1792

Transportation or penal transportation is the deporting[1] of convicted criminals to a penal colony. Examples include transportation by France to Devil's Island and by the UK to its colonies in the Americas, from the 1610s through the American Revolution in the 1770s, and then to Australia between 1788 and 1868.

Transportation punished both major and petty crimes in Great Britain and Ireland from the 17th century until well into the 19th century. A sentence could be for life or a specific period. The penal system required the convicts to work, on government projects such as road construction, building works and mining, or assigned to free individuals as unpaid labour. Women were expected to work as domestic servants and farm labourers.

A convict who had served part of his time might apply for a ticket of leave permitting some prescribed freedoms. This enabled some convicts to resume a more normal life, to marry and raise a family, and a few to develop the colonies while removing them from the society. Exile was an essential component and thought a major deterrent. Transportation was also seen as a humane and productive alternative to execution, which would most likely have been the sentence to many if transportation had not been introduced.

In British colonial India, opponents of British rule were transported to the Cellular Jail in the Andaman islands. 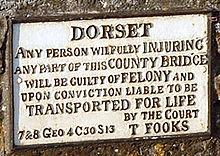 This notice on a bridge in Dorset warns that damage to the bridge can be punished by transportation.

The gaols became overcrowded and dilapidated ships were pressed into service, the hulks moored in various ports as floating gaols. The number of convicts transported to North America is not verified although it has been estimated to be 50,000 by Dr John Dunmore Lang. These went originally to New England, the majority of prisoners taken in battle from Ireland and Scotland. Some were sold as slaves to the Southern states.[4]

From the 1620s until the American Revolution, the British colonies in North America received transported British criminals, effectively double the period that Australian colonies received convicts. The American Revolutionary War brought that to an end and, since the remaining British colonies in what is now Canada were close to the new United States of America, prisoners sent there might become hostile to British authorities. Thus, the British Government was forced to look elsewhere.

In 1787, the "First Fleet" departed from England, to establish the first British settlement in Australia, as a penal colony. They arrived at Port Jackson (Sydney) on 26 January 1788, a date now celebrated as Australia Day. In 1803, Van Diemen's Land (Tasmania) was also settled as a penal colony, followed by the Moreton Bay Settlement (Queensland) in 1824. The other Australian colonies were "free settlements", as non-convict colonies were known. However, the Swan River Colony (Western Australia) accepted transportation from England and Ireland in 1851, to resolve a long-standing labour shortage. Until the massive influx of immigrants during the Australian gold rushes of the 1850s, the settler population had been dominated by English and Irish convicts and their descendants.

Transportation from Britain/Ireland officially ended in 1868 although it had become uncommon several years earlier.[5]