Minorca or Menorca (Catalan: Menorca, IPA: [məˈnɔrkə]; Spanish: Menorca, IPA: [meˈnorka]; from Latin: Insula Minor, later Minorica "minor island") is one of the Balearic Islands located in the Mediterranean Sea belonging to Spain. It takes its name from being smaller than the nearby island of Majorca.

The island is known for its collection of megalithic stone monuments: navetes, taules and talaiots, which speak of a very early prehistoric human activity. Some of the earliest culture on Minorca was influenced by other Mediterranean cultures, including the Minoans of ancient Crete. For example the use of inverted plastered timber columns at Knossos is thought to have influenced early peoples of Minorca in imitating this practice.[1]

The end of the Punic wars saw an increase in piracy in the western Mediterranean. The Roman occupation of Hispania had meant a growth of maritime trade between the Iberian and Italian peninsulas. Pirates took advantage of the strategic location of the Balearic Islands to raid Roman commerce, using both Minorca and Majorca as bases. In reaction to this, the Romans invaded Minorca. By 121 BC both islands were fully under Roman control, later being incorporated into the province of Hispania Citerior.

In 13 BC Roman emperor Augustus reorganized the provincial system and the Balearic Islands became part of the Tarraconensis imperial province. The ancient town of Mago was transformed from a Carthaginian town to a Roman town.[2] 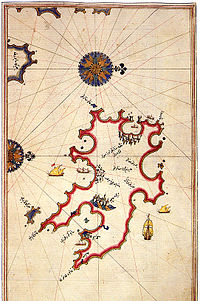 The island had a large Jewish population.[3] The Letter on the Conversion of the Jews by a fifth century bishop named Severus tells of the conversion of the island's Jewish community in AD 418. A number of Jews, including Theodore, a rich representative Jew who stood high in the estimation of his coreligionists and of Christians alike, underwent baptism. The act of conversion brought about, in fact, within a previously peaceful coexisting community by means of the expulsion of the ruling Jewish elite into the bleak hinterlands, the burning of synagogues, and the gradual reinstatement of certain Jewish families after the coerced acceptance of Christianity and its supremacy and rule in order to allow survival for those who had not already perished.[3] Many Jews remained within the Jewish faith while outwardly professing Christian faith. Some of these Jews form part of the Xueta community.

When Minorca became an English possession in 1713, the English willingly proffered an asylum to thousands of Jews from African cities.[citation needed] A synagogue was soon erected in Mahon.

The Vandals easily conquered the island in the 5th century. The Byzantine Empire recovered it in 534. Following the Moorish conquest of peninsular Spain, Minorca was annexed to the Caliphate of Córdoba in 903 and given the Arabicized name of Manûrqa, with many Moors emigrating to the island. In 1231, after Christian forces reconquered Majorca, Minorca chose to become an independent Islamic state, albeit one tributary to King James I of Aragon. The island was ruled first by Abû 'Uthmân Sa'îd Hakam al Qurashi (1234–1282), and following his death by his son, Abû 'Umar ibn Sa'îd (1282–1287). An Aragonese invasion, led by Alfonso III, came on 17 January 1287; its anniversary is now celebrated as Minorca's national day. Some of the Muslim inhabitants of the island were enslaved and sold in the slave markets of Ibiza, Valencia and Barcelona, while others became Christians.

Until 1344 the island was part of the Kingdom of Majorca, also an Aragonese vassal state, which was itself annexed to Aragon, and subsequently to the Unified Kingdom of Spain. During the 16th century, Turkish naval attacks destroyed Maó, and the then capital, Ciutadella, before Turkish settlement took place on some of the island.

Invaded by Britain's Royal Navy in 1708 during the War of the Spanish Succession, Minorca became temporarily a British possession. Great Britain took possession in 1713 under the terms of the Article XI of the Treaty of Utrecht. Under the governorship of General Richard Kane, this period saw the island's capital moved to Port Mahon, and a naval base established in that town's harbour.

During the Seven Years' War, however, Spain regained the island in 1756 after the battle of Minorca. British resistance persisted at Port Mahon, but the garrison was forced to capitulate under honourable terms, including free passage back to Britain, on 29 June of that same year. Thanks to the Treaty of Paris (1763), however, the British returned to the island again following Britain's victory in the Seven Years War. During the American War of Independence, the British were defeated for a second time, in this instance by a combination of French and Spanish forces, which regained the island after a long siege of St. Philip's Castle in Port Mahon on 5 February 1782. The British ceded the island back to Spain the next year in the Treaty of Versailles. Minorca was invaded by the British once again in 1798, during the French Revolutionary Wars, but it was finally and permanently repossessed by Spain by the terms of the Treaty of Amiens in 1802. The British influence can still be seen in local architecture with elements such as sash windows.

As the rest of the Balearic Islands, Minorca was not occupied by the French during the Peninsular War, as it was successfully protected by the British Navy, this time allied to Spain.

During the Spanish Civil War, Minorca stayed loyal to the Republican Spanish Government, while the rest of the Balearic Islands supported the Nationalists. It did not see combat, except for aerial bombing by the Italians of Corpo Truppe Volontarie Air Force. Many Minorcans were also killed when taking part in a failed invasion of Majorca. Also some Majorcans and a priest were executed in Minorca during Pedro Marqués Barber era (July–December 1936). After the Nationalist victory in 1939, the British Navy assisted in a peaceful transfer of power in Minorca and the evacuation of some political refugees aboard HMS Devonshire.

In October 1993, Minorca was designated by UNESCO as a biosphere reserve. In July 2005, the island's application to become the 25th member of the International Island Games Association was approved.

The location of Minorca in the middle of the western Mediterranean was a staging point for the different cultures since prehistoric times. This Balearic Island has a mix of colonial and local architecture.

The fiestas take place throughout the summer in different towns around the island, and have their origins in the early 14th century.[5] The international opera week and international organ festival in Mahon and, the summer music festival and Capella Davidica concerts in Ciutadella are the main events of the island.

Minorca’s cuisine is dominated by the Mediterranean diet which is known to be very healthful. Whilst many of the locals have adopted modern attitudes they still uphold certain old traditions like chivalry, courtesy and, of course, hospitality.[6]

Minorca is especially well known for its traditional summer fiestas, which intrigue many visitors. The 'Festes de Sant Joan' is held annually in Ciutadella. The festes lasts for three days. On the first day, a man bears a well-groomed sheep upon his shoulders and parades around the local streets. In the late evening, main streets are closed and bonfires held upon them.

On the second day, locally bred black horses are the star of the show. Dressed up for the occasion with ribbons and rosettes. The riders, or caixers, ride the horses through the streets and encourage them, along with a tumultuous crowd of people, to rear up on their hind legs. The brave can be found running underneath them as they do so.

The third day sees intense competition between the riders in a harmless form of jousting that involves spearing a suspended ring with a lance at considerable speed. The festes is brought to a close with a firework display.

The two official languages are Spanish and Balearic Catalan.[7] Natives to the island speak the variety of Catalan called Menorquí, and they typically speak Spanish fluently as a second language; many immigrants are monolingual in Spanish.

Between Menorquí and standard Catalan proper, as with most Balearic dialects, the most distinctive difference is the different word used for the article "the", where Menorquí uses "es" for masculine and "sa" for feminine. Menorquí thus shares the source of its article with many Sardinian varieties (masc. sing. su, fem sing. sa), rather than the standard Catalan "el" and "la", common to other Romance languages (e.g. Spanish el, la, Italian il, la), corresponding to a form which was historically used along the Costa Brava of Catalonia, from where it is supposed that the islands were repopulated after being conquered from the Moors. Menorquí also has a few English loan words dating back to the British occupation such as "grevi", "xumaquer", "boinder" and "xoc" taken from "gravy", "shoemaker", "bow window" and "chalk", respectively.

Lingering British influence is seen in the Minorcans' taste for gin, which during local festes honoring towns' patron saints is mixed with bitter lemon to make a golden liquid known as a Pomada. One common factor amongst in Minorca is a steady, and often extreme, imbibement of Pomada throughout the whole day.[citation needed] Also famous is Formatge de Maó, a cheese typical of the island.

It is thought that mayonnaise was brought back to France from Mahon, Minorca, after Louis-François-Armand du Plessis de Richelieu's victory over the British at the city's port in 1756.[citation needed]

One of the typical gastronomic products of Minorca are sweets known as flaons.

Minorca is rich in wild flowers typical of the Mediterranean with a number of endemic species and many orchids. Most are in flower early in the year in late March, April and May.

30 species of butterflies have been recorded on Minorca and most are on the wing from March to late September. The species that occur include the Cleopatra, Lang's Short Tailed Blue and the spectacular Two-tailed Pasha.
Despite not having many large wetlands dragonflies abound on Minorca. Seventeen species have been recorded including the magnificent Emperor Dragonfly.

Menorca does not have many species of reptiles or amphibians. There are three species of amphibia; Green Toad (Bufo viridis), Marsh Frog and Stripeless tree frog (Hyla meridionalis). The common lizard seen all over the island is the Italian Wall Lizard (Podarcis siculus) although the Moroccan Rock Lizard (Scelaris perspicillata) also occurs. The Balearic endemic Lilford's Wall Lizard (Podarcis lilfordi) can be found on many of the offshore islands. Two species of Gecko can be found on Minorca, the Moorish (Tarentola mauritanica) and the Turkish (Hemidactylus turcicus) also called the Mediterranean House Gecko. Four species of snake occur: the Viperine Snake (Natrix maura); Grass Snake; False Smooth Snake (Macroprotodon cucullatus) and the Ladder Snake (Rhinechis scalaris).

Hermann's Tortoise (Testudo hermanni) is quite common and can be found all over the island. Two terrapin species are also found, the native European pond terrapin (Emys orbicularis) and the introduced American red-eared slider (Trachemys scripta).

The birdlife of Minorca is very well known. Menorca is a well watched island which is on the migration route of many species and good number of passage migrants can be seen in spring. Residents include Audouin's Gull, Blue Rock Thrush, and Thekla Lark. Booted eagle and Red Kite are easy to see as is Egyptian Vulture in the right habitat. In summer you get Bee-eaters and Minorca has major colonies of Cory's Shearwater and Balearic Shearwater.

Minorca does not have any large mammals, apart from humans. There are some small mammals including Rabbits, Rats, Mice, Pine Marten and the North African sub-species of Hedgehog. 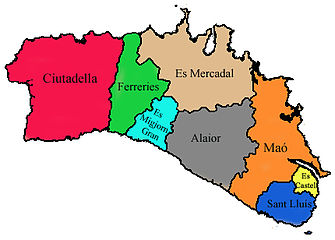 The major towns are Maó and Ciutadella. The island is administratively divided into eight municipalities (from west to east):

The areas and populations of the municipalities (according to the Instituto Nacional de Estadística, Spain) are: