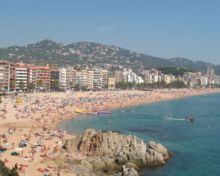 The Costa Brava is a coastal region of northeastern Catalonia, Spain, in the comarques of Alt Empordà, Baix Empordà and Selva, in the province of Girona. Costa is the Catalan and Spanish word for 'coast', and Brava means 'rugged' or 'wild'. The Costa Brava stretches from Blanes, 60 km (37 mi) northeast of Barcelona, to the French border.

In the 1950s, the Costa Brava was identified by the Spanish government and local entrepreneurs as being suitable for substantial development as a holiday destination, mainly for package holiday tourists from Northern Europe and especially, the United Kingdom and France. The combination of a very good summer climate, nature, excellent beaches and a favourable foreign exchange rate was exploited by the construction of large numbers of hotels and apartments in such seaside resorts as Blanes, Tossa de Mar, and Lloret de Mar. Tourism rapidly took over from fishing as the principal business of the area. 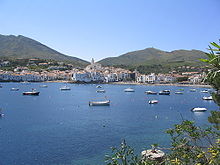 While part of the Costa Brava coastline lent itself to tourist developments on a very large scale, other parts have retained a more traditional look and have become "hidden gems" for visitors who want a little more than sun, sand and sangria. Small towns like Cadaqués, which is close to the French border and close to the foothills of the Pyrenees, have attracted artists, such as Salvador Dalí, Joan Miró and Pablo Picasso. The Dalí Theatre and Museum in Figueres is one of the most important and visited museums in Catalonia. One can also visit Dalí's House-Museum in Port Lligat, near Cadaqués and the Castle of Púbol in Púbol. The coast between Roses and Tossa de Mar has many delightful small coastal towns, such as Pals, Begur, Tamariu, S'Agaró, Empuriabrava, Llafranc, L'Estartit, Aigua Blava, Fornells, Calella de Palafrugell, Calonge, Palamós and Sant Feliu de Guíxols. 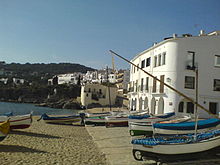 In 1998, the coastal towns of the Costa Brava signed a charter, called the Carta de Tossa, which undertook to pursue environmental protection, along with tourism. This recognised the value of the region's wide range of natural habitats and microclimates [1]. The Medes Islands off the coast of L'Estartit are in Spain's first marine reserve and provide a home to a wide range of fish and aquatic flora. The nearby wildfowl reserve on marshlands at Aiguamolls de l’Empordà also saved land from the potential ravages of development.