Costa del Sol
This article is about the Spanish region. For the building complex in Singapore, see Costa Del Sol, Singapore. 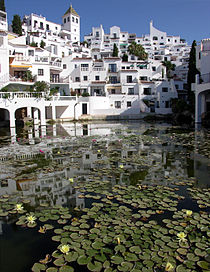 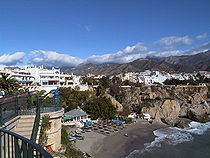 Beaches in the Costa del Sol.

The Costa del Sol (Spanish pronunciation: [ˈkosta ðel sol]; "Sunny Coast" or more literally, "Coast of the Sun") is a region in the south of Spain, in the autonomous community of Andalusia, comprising the coastal towns and communities along the Mediterranean coastline of the Málaga province. The Costa del Sol is situated between two lesser known costas: Costa de la Luz and Costa Tropical. Formerly made up only of a series of small, quiet fishing settlements, the region has been completely transformed during the latter part of the 20th century into a tourist destination of world renown.

It includes the city of Málaga and the towns of Torremolinos, Benalmádena, Fuengirola, Mijas, Marbella, San Pedro de Alcántara, Estepona, Manilva, Casares, Rincon de la Victoria, Vélez-Málaga, Nerja, Frigiliana and Torrox. The Costa del Sol extends from the cliffs at Maro in the East to Punto Chullera in the west. Settlement in the region dates back to the Bronze Age, and has been colonised and ruled by many cultures such as the Phoenicians, Greeks, Carthaginians, Romans, Vandals, Visigoths and Moors, before the Reconquista.

Historically its population lived in the fishing villages, and in the "white" villages a little distance inland, in the mountains running down to the coast. The area was discovered and developed to meet the demands of international tourism in the 1950s and has since been a popular destination for foreign tourists not only for its beaches but also for its local culture. The area is particularly famous for its towns like Marbella, which provides the Costa del Sol with its reputation for being a playground for its super-rich and famous visitors.

During the late 1970s and 1980s, the region was also known in the United Kingdom as the "Costa del Crime", due to the trend for British gangsters to escape from legal trouble at home by moving there to live their lives in luxury. Due to tense relations between the two nations over Gibraltar, extradition between the two countries was not followed. This phenomenon has been alluded to in television shows such as Auf Wiedersehen, Pet and in the more recent films Sexy Beast and The Business.[1][2]

The Costa del Sol is a popular tourist region that welcomes millions of people annually, who mostly arrive at International Malaga airport and head to one of the many resorts located along this stretch of coastline from Manilva in the west to Nerja in the east.[3][4]