Gecko
This article is about the type of animal. For other uses, see Gecko (disambiguation).

Geckos are lizards belonging to the family Gekkonidae, found in warm climates throughout the world. They range from 1.6 cm to 60 cm.

Geckos are unique among lizards in their vocalizations, making chirping sounds in social interactions with other geckos. Gekkonidae is the largest family of lizards, with over 2000 different species worldwide and many others likely yet to be discovered. The New Latin gekko and English gecko stem from the Malay gēkoq, which is imitative of the sound the animals make.[2]

All geckos, excluding the Eublepharinae subfamily, have no eyelids and instead have a transparent membrane which they lick to clean. Many species will, in defense, expel a foul-smelling material and feces onto their aggressors. There are also many species that will drop their tails in defense, a process called autotomy. Many species are well known for their specialized toe pads that enable them to climb smooth and vertical surfaces, and even cross indoor ceilings with ease (one hypothesis explains the ability in terms of the van der Waals force). These antics are well-known to people who live in warm regions of the world, where several species of geckos make their home inside human habitations. These species (for example the House Gecko) become part of the indoor menagerie and are often welcome guests, as they feed on insects, including mosquitoes. Unlike most lizards, geckos are usually nocturnal and are great climbers.

The largest species, the Kawekaweau, is only known from a single, stuffed specimen found in the basement of a museum in Marseille, France, and one documented sighting in the wild in 1870. This gecko was 60 cm (24 in) long and it was endemic to New Zealand, where it lived in native forests. It was probably wiped out along with much of the native fauna of these islands in the late 19th century, when new invasive species such as rats and stoats were introduced to the country during European colonization. The smallest gecko, the Jaragua Sphaero, is a mere 1.6 cm long and was discovered in 2001 on a small island off the coast of the Dominican Republic.[3] 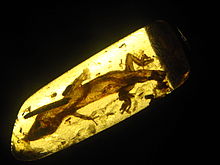 Geckos come in various patterns and colors such as purple, pink, blue, and black, and are among the most colorful lizards in the world.

Some are subtly patterned and somewhat rubbery looking, while others are brightly colored. Some species can change color to blend in with their environment or with particular temperatures. Some species are parthenogenic, which means the female is capable of reproducing without copulating with a male. This improves the gecko's ability to spread to new islands. However, in a situation where a single female gecko populates an entire island, the island will suffer from a lack of genetic variation within the geckos that inhabit it. The gecko's mating call sounds like a shortened bird chirping which attracts males, when they are around. This allows a female to reproduce with more genetic variation, by using sexual reproduction instead of asexual. 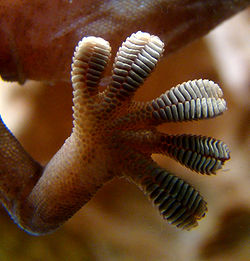 The toes of the gecko have a special adaptation that allows them to adhere to most surfaces without the use of liquids or surface tension. The spatula tipped setae on gecko footpads allow attractive forces called van der Waals interactions to arise between the adhesive setae and the surface. One study suggested that capillary adhesion might play a role,[4] but that hypothesis has been rejected by more recent studies.[5][6][7]

These van der Waals interactions involve no fluids; in theory, a boot made of synthetic setae would adhere as easily to the surface of the International Space Station as it would to a living room wall, although adhesion varies with humidity.[6][7] The setae on the feet of geckos are also self cleaning and will usually remove any clogging dirt within a few steps.[8][9] Teflon, which has very low van der Waals forces,[10] is more difficult for geckos to adhere to than many other surfaces.

Geckos' toes seem to be "double jointed", but this is a misnomer. Their toes actually bend in the opposite direction from our fingers and toes. This allows them to overcome the van der Waals force by peeling their toes off surfaces from the tips inward. In essence, this peeling action alters the angle of incidence between millions of individual setae and the surface, reducing the Van der Waals force. Geckos' toes operate well below their full attractive capabilities for most of the time. This is because there is a great margin for error depending upon the roughness of the surface, and therefore the number of setae in contact with that surface. 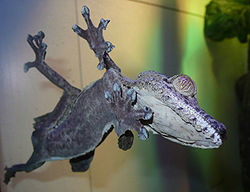 Use of small van der Waals attraction force requires very large surface areas: every square millimeter of a gecko's footpad contains about 14,000 hair-like setae. Each seta has a diameter of 5 micrometers. Human hair varies from 18 to 180 micrometers, so a human hair could hold between 3 and 36 setae. Each seta is in turn tipped with between 100 and 1,000 spatulae.[8] Each spatula is 0.2 micrometer long[8] (one five-millionth of a meter), or just below the wavelength of visible light.[11] 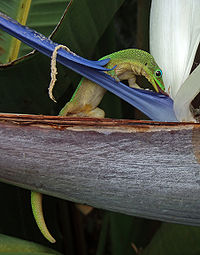 Gold dust day gecko licking nectar from the flower of a Strelitzia plant, also known as "bird of paradise." 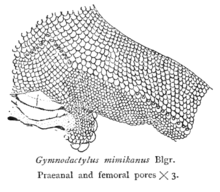 Pores on the skin are often used in classification. 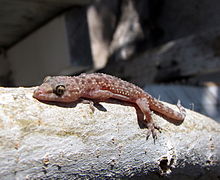