Crickets, family Gryllidae (also known as "true crickets"), are insects somewhat related to grasshoppers, and more closely related to katydids or bush crickets (family Tettigoniidae). They have somewhat flattened bodies and long antennae. There are about 900 species of crickets. They tend to be nocturnal and are often confused with grasshoppers because they have a similar body structure including jumping hind legs. Crickets are harmless to humans.

The sound emitted by crickets is commonly referred to as chirping; the scientific name is stridulation. Only the male crickets chirp. The sound is emitted by the stridulatory organ, a large vein running along the bottom of each wing, covered with "teeth" (serration) much like a comb. The chirping sound is created by running the top of one wing along the teeth at the bottom of the other wing. As he does this, the cricket also holds the wings up and open, so that the wing membranes can act as acoustical sails. It is a popular myth that the cricket chirps by rubbing its legs together.

There are four types of cricket song: The calling song attracts females and repels other males, and is fairly loud. The courting song is used when a female cricket is near, and is a very quiet song. An aggressive song is triggered by chemoreceptors on the antennae that detect the near presence of another male cricket and a copulatory song is produced for a brief period after a successful mating.[citation needed]

Crickets chirp at different rates depending on their species and the temperature of their environment. Most species chirp at higher rates the higher the temperature is (approximately 62 chirps a minute at 13°C in one common species; each species has its own rate). The relationship between temperature and the rate of chirping is known as Dolbear's Law. According to this law, counting the number of chirps produced in 14 seconds by the snowy tree cricket common in the United States and adding 40 will approximately equal the temperature in degrees Fahrenheit.[1]

Crickets, like all other insects, are cold-blooded. They take on the temperature of their surroundings. Many characteristics of cold-blooded animals, like the rate at which crickets chirp, or the speed at which ants walk, follow an equation called the Arrhenius equation. This equation describes the activation energy or threshold energy required to induce a chemical reaction. For instance, crickets, like all other organisms, have many chemical reactions occurring within their bodies. As the temperature rises, it becomes easier to reach a certain activation or threshold energy, and chemical reactions, like those that occur during the muscle contractions used to produce chirping, happen more rapidly. As the temperature falls, the rate of chemical reactions inside the crickets' bodies slow down, causing characteristics, such as chirping, to also slow down.

Crickets have tympanic membranes located just below the middle joint of each front leg (or knee). This enables them to hear another cricket's song.

The calling song of a field cricket.

In 1975, Dr. William H. Cade discovered that the parasitic tachinid fly Ormia ochracea is attracted to the song of the male cricket, and uses it to locate the male in order to deposit her larvae on him. It was the first example of a natural enemy that locates its host or prey using the mating signal[2]. Since then, many species of crickets have been found to be carrying the same parasitic fly, or related species. In response to this selective pressure, a mutation leaving males unable to chirp was observed amongst a population of field crickets on the Hawaiian island of Kauai, giving these crickets the obvious advantage of eluding their parasitoid opponents.

Crickets are omnivorous scavengers who feed on organic materials, as well as decaying plant material, fungi, and some seedling plants. Crickets eat their own dead when there are no other sources of food available, and exhibit predatorial behavior upon weakened, crippled crickets.

Crickets have relatively powerful jaws, and several species have been known to bite humans.[3]

Crickets mate in late summer and lay their eggs in autumn. The eggs hatch in the spring and have been estimated to number as high as 200 per fertile female.[citation needed] Species Acheta domestica however lays eggs almost continually, with the females capable of laying at least twice a month. Female crickets have a long needlelike egg-laying organ called an ovipositor.

Crickets are popular as a live food source for carnivorous pets like frogs, lizards, tortoises, salamanders, and spiders. Feeding crickets with nutritious food in order to pass the nutrition onto animals that eat them is known as gut loading. In addition to this, the crickets are often dusted with a mineral supplement powder to ensure complete nutrition to the pet. 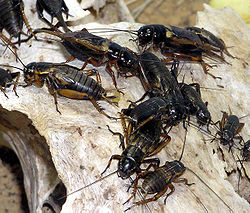 Subfamilies of the family Gryllidae:

In addition to the above subfamilies in the family Gryllidae, several other orthopteran groups outside of this family also may be called crickets:

The folklore and mythology surrounding crickets is extensive.[4] The singing of crickets in the folklore of Brazil and elsewhere is sometimes taken to be a sign of impending rain, or of a financial windfall. In Álvar Núñez Cabeza de Vaca's chronicles of the Spanish conquest of the Americas, the sudden chirping of a cricket heralded the sighting of land for his crew, just as their water supply had run out.[5] In Caraguatatuba, Brazil, a black cricket in a room is said to portend illness; a gray one, money; and a green one, hope.[5] In Alagoas state, northeast Brazil, a cricket announces death, thus it is killed if it chirps in a house.[6] In the village of Capueiruçu in Bahia State, a constantly chirping cricket foretells pregnancy, but if it pauses, money is expected.[7] The mole cricket locally known as "paquinha", "jeguinho", "cachorrinho-d'água", or "cava-chão" (genera Scapteriscus and Neocurtilla, Gryllotalpidae) is said to predict rain when it digs into the ground.[8] In Barbados, a loud cricket means money is coming in; hence, a cricket must not be killed or evicted if it chirps inside a house. However, another type of cricket that is less noisy forebodes illness or death.[9] In Zambia, the Gryllotalpa africanus cricket is held to bring good fortune to anyone who sees it.[10]

Crickets are popular pets and are considered good luck in some countries; in China, crickets are sometimes kept in cages,[11] It is also common to have them as caged pets in some European countries, particularly in the Iberian Peninsula. Cricket fighting as a gambling or sports betting pastime also occurs, particularly in China, Mexico and Southeast Asia.

Various species of crickets are a part of people's diets in some countries, and are considered delicacies of high cuisine in places like Mexico. In Cambodia and southern part of Vietnam, cricket is well known as a delicious food. It is prepared by deep frying the soaked and cleaned insect in oil.