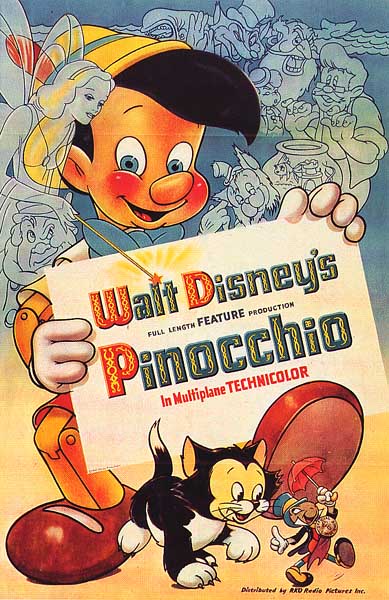 
Based on the book by
narrator =
starring =
Dickie Jones


producer =
distributor =
released = ,
country =
runtime = 88 minutes
language = English
budget = $2,600,000 USD (est.)
gross = $84,254,167
imdb_id = 0032910 "Pinocchio" is the second in the . It was produced by and was originally released to theatres by on , . Based on the story "" by , it was made in response to the enormous success of "Snow White and the Seven Dwarfs". The plot of the film involves a wooden puppet being brought to life by a blue fairy, who tells him he can become a real boy if he proves himself "brave, truthful, and unselfish". Thus begin the puppet's adventures to become a real boy, which involve many encounters with a host of unsavory characters.

The film was adapted by Aurelius Battaglia, , Otto Englander, , , , and from Collodi's book. The production was supervised by and , and the film's sequences were directed by , , , , and .

Geppetto makes a wood puppet called Pinocchio. His wish that Pinocchio be a human is unexpectedly granted by Blue Fairy, however she only animates the puppet telling him that he has to prove himself in order to become a "real boy". Blue Fairy assigns Jiminy Cricket to act as Pinocchio's "conscience" and keep him out of wrong, and Jiminy requests that if he succeeds, he wants a medal. Jiminy is not too successful in this endeavor and most of the film is spent with Pinocchio deep in wrong.

On his first day of school Pinocchio is lead astray by the conniving Honest John and Gideon who convince him to join Stromboli's puppet show instead. Pinocchio becomes Stromboli's star attraction but Stromboli abuses Pinocchio by locking him in a bird cage. Stromboli also tells Pinocchio that "once you get old, I'll turn you into fire wood." The Blue Fairy appears and questions Pinocchio about his situation, Pinocchio lies about how he got into the situation but recants when his nose grows in size. With the help of the Blue Fairy and Jiminy, Pinocchio escapes from the cage after his nose is returned to normal.

Honest John and Gideon once more manage to lead Pinocchio astray by convincing him to go to Pleasure Island. On his way he befriends Lampwick, a misbehaved and destructive boy who convinces Pinocchio to act like he and the other boys on Pleasure Island do. Pinocchio enjoys gambling, smoking, getting drunk and destroying Pleasure Island much to Jiminy's dismay. However Jiminy discovers that the island has the power to turn boys who "make jackasses of themselves" into literal s. These boys are then sold to work in the local s.

Lampwick is transformed but Pinocchio manages to escape with only his ears transformed and having gained a donkey's tail, they escape Pleasure Island and return to Geppetto's house. However, when he returns to Geppetto's store the carpenter and his pets, who somehow learned that Pinocchio was on Pleasure Island, have gone to sea in search for him.

To search for Geppetto, Pinocchio and Jiminy manage to traverse underwater. However they are eaten by the gigantic whale , within they find that Geppeto and his pets also reside there having been swallowed themselves. Pinocchio devises an escape plan by burning wood in order to make Monstro sneeze. The plan works but in the process Monstro chases after them. Geppetto nearly drowns and asks Pinocchio to save himself, by swimming for shore. Pinocchio grabs his father and tries to swim to shore, but in the process, Monstro bumps into a huge boulder and causes a huge tidal wave, which washes everyone onto shore. Geppetto survives, but Pinocchio drowns and is dead.

Geppeto, Jiminy and the pets are distraught and return home with Pinocchio's body. The decides that Pinocchio has proved his worth and brings him back to life and also turns him into a real boy. Everyone is overjoyed and they begin to celebrate. The Blue Fairy rewards Jiminy with the medal he requested when he was assigned as Pinocchio's conscience. The movie ends with Jiminy singing the classic song "".

*, voiced by . Jiminy is a cricket who acts as Pinocchio's "conscience" and the partial narrator of the story.
*, voiced by Dickie Jones. Pinocchio is a wooden made by Geppetto and turned into a living puppet by the .
*Geppetto, voiced by . Geppetto is a toymaker who creates Pinocchio and wishes for him to become a real boy.
*Figaro and , voiced by . Geppetto's black and white housecat and , respectively.
*J. Worthington "Honest John" Foulfellow, voiced by . Honest John is a sly anthropomorphic who tricks Pinocchio twice in the film. His full name is possibly John Worthington Foulfellow.
*Gideon is Honest John's dumb, mute and crafty anthropomorphic feline . His voice was originally to be supplied by of fame, but they deleted his dialogue in favor of a mute performance (i.e. ) just like Dopey of "Snow White and the Seven Dwarfs". However, Gideon's hiccups were provided by Blanc.
*Stromboli, voiced by . Stromboli is a large, sinister, bearded puppet maker who forces Pinocchio to perform onstage in order to make money. He speaks in an Italian Accent.
*The Blue Fairy, voiced by . She is the beautiful fairy who brings Pinocchio to life and turns him into a real boy at the end.
*, voiced by . A corrupt coachman who owns and operates Pleasure Island. He speaks in a Cockney accent.
*Lampwick, voiced by . Lampwick is a naughty boy Pinocchio meets on his way to Pleasure Island. He turns into a while the boys are hanging out.
*Monstro is the whale that swallows Geppetto, Figaro, and Cleo during their search for Pinocchio.

The plan for the original film was considerably different from what was released. Numerous characters and plot points, many of which came from the original novel, were used in early drafts. Producer was displeased with the work that was being done and called a halt to the project midway into production so that the concept could be rethought and the characters redesigned.

Originally, Pinocchio was to be depicted as a -esque wise guy, equally as rambunctious and sarcastic as the puppet in the original novel. He looked exactly like a real wooden puppet with, among other things, a long pointed nose, a peaked cap, and bare wooden hands. But Walt found that no one could really sympathize with such a character and so the designers had to redesign the puppet as much as possible. Eventually, they revised the puppet to make him look more like a real boy, with, among other things, a button nose, a child's , and standard cartoon character 4-fingered (or 3 and a thumb) hands with Mickey Mouse-type gloves on them. The only parts of him that still looked more or less like a puppet were his arms and legs.

Additionally, it was at this stage that the character of the cricket was expanded. (voiced by Cliff "Ukelele Ike" Edwards) became central to the story. Originally the cricket wasn't even in the film. Once added, he was depicted as an actual (that is, less anthropomorphized) cricket with toothed legs and waving anntenae. But again Walt wanted someone more likable, so conjured up "a little man with no ears. That was the only thing about him that was like an insect."

(most famous for voicing many of the characters in "" and "" cartoons), was hired to perform the voice of Gideon the Cat, who was Foulfellow the Fox's sidekick. However, it was eventually decided for Gideon to be mute (just like Dopey, whose whimsical, Harpo Marx-style persona made him one of "Snow White"'s most comic and popular characters). All of Blanc's recorded dialogue in this film was subsequently deleted, save for a solitary hiccup, which was heard three times in the film.

Many of these ideas were later used in

The influential abstract animator contributed to the effects animation of the Blue Fairy's wand. [Moritz, William. Fischinger at Disney - or Oskar in the Mousetrap. Millimeter. 5. 2 (1977): 25-28, 65-67. [http://www.centerforvisualmusic.org/OFMousetrap.htm] ]

Film critic would later write that "with "Pinocchio", Disney reached not only the height of his powers, but the apex of what many critics consider to be the realm of the animated cartoon." [Maltin, Leonard (1973). Pinocchio. In Leonard Maltin (Ed.), The Disney Book, pp. 37. New York: Crown Publishers, Inc.]

"Pinocchio" was not commercially successful when first released, and Disney only recouped $1.9 million against a $2.6 million budget. The film achieved some success at the American box office, but was not able to profit, due to its poor performance in Europe [ [http://disney.go.com/disneyatoz/familymuseum/exhibits/articles/pinocchio/index.html A Disney Classic: "Pinocchio" ] ] . The timing of the film's release was a factor, with cutting off an markets. Although the United States had not yet entered the war, the mood of the times may have meant less interest among Americans in seeing fantasy stories as they were in the days of "Snow White". It also lacked the romance element that had proven popular in "Snow White". To add insult to injury, Paolo Lorenzini, nephew of the original story's author, had beseeched the Italian Ministry of Popular Culture to charge Disney with slander for portraying the Italian puppet "so he easily could be mistaken for an American."Fact|date=December 2007

Nevertheless, there were positive reactions to the movie as well. , who had criticized "Snow White", wrote: "The faults that were in "Snow White" no longer exist. In writing of "Pinocchio", you are limited only by your own power of expressing enthusiasm." Also, despite the poor timing of the release, the film did do well both critically and at the box office in the United States. Jiminy Cricket's song, "," became a major hit and is still identified with the film, and later as a for itself. "Pinocchio" also won the and the Academy Award for Best Scoring of a Musical Picture. In 1994, Pinocchio was added to the United States as being deemed "culturally, historically, or aesthetically significant." In 2001 selected it as one of the ten best animated films of all time

With the re-release of "Snow White" in 1944 came the tradition of re-releasing Disney films every seven to ten years. "Pinocchio" has been theatrically re-released in 1945, 1954, 1962, 1971, 1978, 1984, and 1992. The 1992 re-issue was digitally restored by cleaning and removing scratches from the original negatives one frame at a time, eliminating soundtrack distortions, and revitalizing the color. The film also received four video releases (and two DVD releases), being a hot-seller in 1985 (this print was re-mastered and re-issued in 1986). Then the more comprehensive digital restoration that was done for the 1992 re-issue was released on ,followed by the final VHS release(which was also the film's first release on as well as the first in the Walt Disney Gold Classics Collection VHS/DVD line) in 1999. The second Disney DVD release premiered the following year in 2000. The third DVD release and only the second Disney release, following "Sleeping Beauty"'s October 2008 release (a Platinum Editon), are scheduled for March 3, 2009.

ongs written for film but not used

*"I'm a Happy-Go-Lucky Fellow" - Jiminy Cricket (this song eventually showed up in "")
*"As I Was Saying To the Duchess" - J. Worthington Foulfellow (this line is spoken briefly by Foulfellow in the film, however)
*"Three Cheers For Anything" - Lampwick; Pinocchio; Alexander; Other Boys
*"Monstro the Whale" - Chorus

"starring" Pinocchio, toured nationally and internationally from 1987 to 1992. A shorter version of the story is also presented in the current Disney on ice production "100 Years of Magic"

Pinocchio and Geppetto appear as characters in the game . Monstro is also featured as one of the worlds. Jiminy Cricket appears as well, acting as a recorder, keeping a journal of the game’s progress in both Kingdom Hearts and its sequel, . [ [http://na.square-enix.com/games/kingdomhearts/ Kingdom Hearts Official Page] ]