Muscat and Oman (Arabic: مسقط وعمان‎) was a country that encompassed the present day Sultanate of Oman and parts of the United Arab Emirates. The country is not to be confused with either the Trucial States or Trucial Oman, which were sheikhdoms under British protection since 1820.

Historical differences always existed between the more secular, rich, seafaring coastal Sultanate of Muscat and the tribes of the interior. Though the inland territories were under nominal control of the Sultans of Muscat, they were in practice run by tribal leaders and the conservative Imams of Oman, practitioners of the Ibadi sect of Islam.

The flag of the Imamate of Oman (1856-1970). This was a white flag with the Omani Khanjar coat-of-arms on the top left corner. The Khanjar is still used today in the flag of the Sultanate of Oman.

The Sultanate of Muscat possessed a powerful naval force, which enabled the creation of a short-lived empire, encompassing modern Oman, the United Arab Emirates, southern Baluchistan, and Zanzibar and the adjacent coasts of Kenya, Tanzania and Mozambique. The Sultanate of Muscat also engaged in a very lucrative slave trade across east Africa. Recently, a claim was made by an Omani minister, suggesting that the Sultanate controlled the distant Mascarene Islands as early as the 15th century.[citation needed] 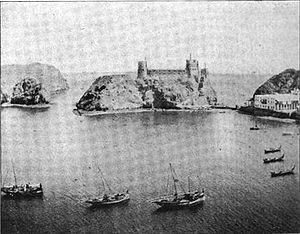 In the early 1820s, the Sultanate lost most of its territories in the Persian Gulf, which became the Trucial States under British protection. The fifth Sultan of the Al Said dynasty, Said bin Sultan, consolidated the Sultanate's territorial holdings and economic interests and Oman prospered. However, the Omani fleet was unable to compete with the more technically advanced European fleets and the Sultanate lost much of the trade with South Asia. Pressure by the British to abandon the slave trade further led to the loss of political and economic clout of the Sultanate.

On June 4, 1856, Said bin Sultan died without appointing a heir to the throne and members of the Al Said dynasty could not agree on a ruler. Through British mediation, two rulers were appointed from the Al Said clan; the third son of the Sultan, Thuwaini bin Said became ruler of the mainland. His sixth son, Majid bin Said, became ruler of an independent Sultanate of Zanzibar on October 19, 1856.[1] The Sultans of Zanzibar were thereafter obliged to pay an annual tribute to Muscat.[2]

The Sultanate of Muscat was regularly under attack from the devout Ibadi tribes who resented the influence of the more secular coastal people. The Sultanate was however able to defend itself with British help. This historical split continued throughout much of the twentieth century with Sultan Taimur bin Feisal granting limited autonomy to the Imamate of Oman under the Ibadi clergy through the Treaty of Seeb in 1920.

The last overseas possession, the port of Gwadar across the Gulf of Oman, was ceded to Pakistan in 1958.

The discovery of oil in the Persian Gulf exacerbated the dispute between the Sultan in Muscat and the Imams of Oman. Oil exploration had begun in the early 1920s by the Anglo-Persian Oil Company. [3] The course of the second world war severely disrupted such activities.
The last Imam of Oman, Ghalib Bin Ali, started an uprising in 1954 when the Sultan granted licenses to the Iraq Petroleum Company despite the fact that the largest oil fields lay inside the Imamate. The hostilities were put down in 1955, but the longer conflict would evolve into the Jebel Akhdar rebellion, where Sultan Said bin Taimur relied heavily on continued British military support. Iraq Petroleum, along with its operator of oil exploration, Petroleum Development Oman, was owned by European oil giants including Anglo-Iranian Oil's successor British Petroleum which encouraged the British government to extend their support to the Sultan. The insurgency erupted again in 1957, when Saudi Arabia began supporting the Ibadi rebels, but eventually the Sultan was able to establish pre-eminence over most of the inland. The same year, the British forces bombarded the town of Nizwa, the capital of the Imamate, and toppled the Ibadi theocracy. Ghalib Bin Ali went into exile in Saudi Arabia and the last rebel forces were defeated two years later, in 1959. The Treaty of Seeb was terminated and the autonomous Imamate of Oman abolished.[4]

The frequency of uprisings such as the Dhofar Rebellion, instigated by the communist government of South Yemen [5], motivated the British to supplant the Sultan. The British chose the Western-educated son of the Sultan, Qaboos bin Said who was locked up in the palace, because his paranoid father feared a coup. On his release, Qaboos bin Said, with the help of British military forces, staged a successful palace coup and was proclaimed Sultan of Muscat and Oman in 1970. The newly consolidated territories along with Muscat were reorganized into the present-day unified Sultanate of Oman by August 1970.[6]

In 1976, again with British aid, the Sultan secured his hold over the entire interior and suppressed the Dhofar rebellion.

The Sohar Sultanate lasted from 1920 until about 1932. In 1920, Sheik Ali Banu Bu Ali, a relative of Sultan Taimur bin Faisal, rebelled in the northern town of Sohar and proclaimed himself Sultan but was deposed by the British in 1932.