Arrowroot
This article is about the herb. For the cycad, see Florida arrowroot.

Arrowroot, or obedience plant (Maranta arundinacea), Bermuda arrowroot, araru, ararao, is a large perennial herb found in rainforest habitats. It is cultivated for a starch obtained from the rhizomes (rootstock), which is also called arrowroot.

A perennial plant about two feet high, arrowroot has small white flowers; and fruits about the size and form of currants. The rootstocks are dug when the plant is a year old, and often exceed 1 foot (30 cm) in length and 0.75 inches (19 mm) in diameter. They are yellowish white, jointed and covered with loose scales.[1]

The plant is naturalized in Florida, but it is chiefly cultivated in the West Indies (Jamaica and St. Vincent), Australia, Southeast Asia, and South and East Africa. It used to be very popular in British cuisine, and Napoleon supposedly said the reason for the British love of arrowroot was to support their colonies.[2]

Arrowroot tubers contain about 23% starch. They are first washed, and then cleaned of the paper-like scale. The scales must be carefully removed before the extraction of the starch because they impart their disagreeable flavor if allowed to remain.[1] After the removal of the scale, the roots are washed again, drained and finally reduced to a pulp by beating them in mortars or subjecting them to the action of the wheel-rasp. The milky liquid thus obtained is passed through a coarse cloth or hair sieve and the pure starch, which is insoluble, is allowed to settle at the bottom. The wet starch is dried in the sun or in a drying house. The result is a powder, the "arrowroot" of commerce, and it is at once packed for market in air-tight cans, packages or cases.

Arrowroot starch has in the past been quite extensively adulterated with potato starch and other similar substances, so care is needed in selection and buying. Pure arrowroot, like other pure starches, is a light, white powder (the mass feeling firm to the finger and crackling like newly fallen snow when rubbed or pressed), odourless when dry, but emitting a faint, peculiar odour when mixed with boiling water, and swelling on cooking into a perfect jelly, which can be used to make a food for vegetarians very smooth in consistency — unlike adulterated articles, mixed with potato flour and other starches of lower value, which contain larger particles. 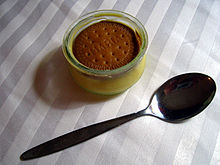 Custard with an Arrowroot biscuit on top

Arrowroot is used as an article of diet in the form of biscuits, puddings, jellies, cakes, hot sauces, etc., and also with beef tea, milk or veal broth, noodles in Korean and Vietnamese cuisine. In the Victorian era it was used, boiled with a little flavoring added, as an easily digestible food for children and people with dietary restrictions. With today's greater understanding of its limited nutritional properties, it is no longer used in this way.[2]

Arrowroot makes clear, shimmering fruit gels and prevents ice crystals from forming in homemade ice cream. It can also be used as a thickener for acidic foods, such as Asian sweet and sour sauce. It is invaluable in cooking when you wish to have a clear, thickened sauce, for example, a fruit sauce. It will not make the sauce go cloudy, as for example will cornstarch, flour or other starchy thickening agents.

The lack of gluten in arrowroot flour makes it useful as a replacement for wheat flour in baking. Like other pure starches, however, arrowroot is almost pure carbohydrate and devoid of protein, thus it does not equal wheat flour nutritionally.

Arrowroot thickens at a lower temperature than does flour or cornstarch, is not weakened by acidic ingredients, has a more neutral taste, and is not affected by freezing. It doesn't mix well with dairy, forming a slimy mixture.[3] It is recommended to mix arrowroot with a cool liquid before adding to a hot fluid. The mixture should be heated only until the mixture thickens and removed immediately to prevent the mixture from thinning. Overheating tends to break down arrowroot's thickening property. Substitute two teaspoons of arrowroot for one tablespoon of cornstarch, or one teaspoon of arrowroot for one tablespoon of wheat flour.[4]

Archaeological studies in the Americas show evidence of arrowroot cultivation as early as 7,000 years ago. The name may come from aru-aru (meal of meals) in the language of the Caribbean Arawak people, for whom the plant is a staple. It has also been suggested that the name comes from arrowroot's use in treating poison arrow wounds, as it draws out the poison when applied to the site of the injury.

In the early days of carbonless copy papers, arrowroot, because of its fine grain size, was a widely used ingredient. After an economical way of centrifugally separating wheat flour was devised, arrowroot lost its role in papermaking.[5]

St. Vincent and the Grenadines has a long history of arrowroot production. The industry arose from humble beginnings as the food and medicine of the Carib and Garifuna peoples to the status of a major export of St. Vincent during the period 1900 to 1965. It became an important commodity in colonial trade in the 1930s. As the sugar industry declined in the nineteenth century, cultivation of arrowroot was developed to fill the void. Since then, the area cultivated declined steadily and the as the crop was eclipsed by competition from other crops, particularly banana. Evidence of its former glory is indicated by the ruins of the various magnificent 19th century factories located in every valley on St. Vincent mainland.

Arrowroot cultivation is now concentrated on farms located north of the Rabacca River particularly in the Owia area. This is also the area where the population of Carib descent is concentrated. In 1998/99, the industry produced 312,000 lb (142,000 kg) of starch, which represents about three percent of the maximum levels that the island exported in the 1960s.

In the past, the St. Vincent Arrowroot Industry played an important role in the economy of the island, contributing close to 50% of the country's foreign export earnings and was the principal source of employment and income of the rural people from the 1930s to the 1960s. During the War Years, the Industry donated a spitfire fighter plane to the Colonial War efforts. By the end of the War, the Industry contributed to the construction of the Peace Memorial Hall in recognition of local effort to the War.

The plant is propagated from other rhizomes and cultivation takes place up to heights of 300 metres on the eastern and windward facing side of the highlands of St.Vincent. Cultivation covers an area of about 3,700 ha. and some 80% of the crop is grown by small farmers. The arrowroot plant is very hardy and not very demanding in its requirements. St. Vincent, particularly the north-east coast, provides the ideal growing conditions for optimal yields; deep, well drained, slightly acidic soils and a hot humid climate. Some peasants farmers produce the crop by shifting cultivation on the cleared forested slopes.

Arrowroot farming is labor intensive especially at harvesting which is done manually. The starch is derived from the underground storage stems or rhizomes, which are plowed up, manually removed from the field and processed at the plant at Owia. The dried starch is refined and tested for purity, graded and package for export.

The harvesting season extends from October to May. On the larger estates, the harvesting of the rhizome usually takes place from the base of a hill towards the top. Harvesting involves breaking off the rhizome from the shoot. Planting and harvesting are inter-related in that when the rhizomes are harvested the shoot is replanted at the same time. In St. Vincent, much use is made of rural unemployment and many women workers are involved in the various phases of operation. Mechanical harvesters have recently been introduced and this allows the arrowroot to be harvested in a shorter time. However, this will lead to some existing workers being unemployed even though labor is becoming increasingly difficult.

When processing the rhizome of tubers, the roots are peeled and washed. The rhizome is grated in water and the fiber extracted, but mechanical grinding on the estates is performed. The extract is dried to a powder flake and is washed several. Although this is done by hand, machines are also used. It is then placed in vats of water. By this process, the starch which is the marketable product, settles. The final product is graded and blended for export. The greatest benefit to the island from the industry comes from the processing to a finished packaged product on island.

Six factories process the island's arrowroot and large size processing plants are located at Belle Vue and at Owia.

Maranta arundinacea should not be confused with other plants with similar common names. These include:

Arrowroot is also used to refer to a similar edible starch obtained from various other tropical plants, for example West Indian arrowroot.[1] The term arrowroot sometimes is used to refer to any starch, not specifically arrowroot starch. In particular, Florida arrowroot was a commercial starch derived from Zamia pumila, harvested from the wild in Florida. Most starch sold today as arrowroot actually is tapioca.[6]